Nina Paley’s Sita Sings the Blues: Copying is not Theft 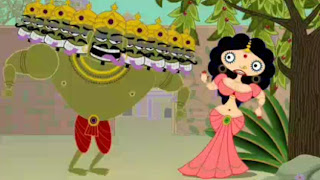 Blasphemy is not all that bad. It makes one to think about the edicts of righteousness. Blasphemy, in that sense, is an unexpected route that helps one to move from the skin of an idea to the core of it. It shakes the patterns, sometimes for bad and most often for good. It forces us to re-program our lives.

And above all, blasphemy is a tool of creativity. It is ironic that creativity could be destructive in a positive sense. Theorists call it ‘deconstruction’. Populists call it ‘rethinking’. Majority calls it a ‘crime’.

Hence, many blasphemers are forced out of the mainstream system only to be embraced surreptitiously and then openly back to the system.

Again the irony is, those who staunchly stand by the edicts are dubbed as ‘fundamentalists’.

Result, blasphemy is a socio-cultural need to further the quality of life.

‘Sita Sings the Blues’, an animation movie by the American animation artist, Nina Paley is blasphemous for those who believe strongly in the righteousness of Indian culture and mythology. The ‘Indian’ here needs to be qualified; it should be understood as ‘ideological Hindu’.

This animation movie is based on Sita; yes our own female protagonist of the epic, Ramayana.

Why Sita is adulated as the embodiment of ‘pati-bhakti’ (unshakable love and devotion for husaband), ‘pativratya’ (chastity) and a subject to all what is considered as ‘good’ by a society, which is ideologically construed and constructed by the dominant male perspective?

Made in 2008, Nina Paley’s ‘Sita Sings the Blues’ is not an answer to this question? But the film is all about questions about the traditionally framed femininity. Nina Paley’s does not seem to be speaking from a feminist platform. On the contrary, all what has been theorized so far by the feminists provides her with an opportunity to humorously look at the life of Sita from multiple aesthetic perspectives.

Sita, born to King Janak is married to Rama, the Prince of Ayodhya. Rama’s father banishes him to the forests for fourteen years. Sita leaves her royal position and comforts behind and follows her husband to the forests. She is abducted to Lanka by the demon king, Ravana. Finally Rama comes with his army of monkeys and rescues her from there. As she has lived in another man’s place, Rama asks her to prove her chastity by undergoing the trial by fire. She does it happily. Back in Ayodhya, Sita is pregnant now. Rama doubts her again. This time she is banished to the forests as the subjects of the kingdom want Ram to be a king who is not swayed by emotions. In the forest Sita delivers a twin- Lav and Kush. Sage Valmiki teaches them the glory of their father. Knowing the birth of his kids, Rama comes to take his children. Once again he asks Sita to prove her chastity. But this time she defies him and ask the mother earth to gobble her up, so does the earth.

This is Valmiki’s storyline. There are ample amount of chances for feminist critique inbuilt in the story itself. It is not just the post-Beauvoir feminists did the deconstruction of Ramayana. In India itself, there had been several classical and modern version of Ramayana that is told from Sita’s perspective. There is even a version that says Sita is the daughter of Ravana.

Nina Paley has not done much in terms of re-reading Ramayana from Sita’s perspective. But what makes her film interesting is that she sticks to the original Valmiki version and makes a few characters outside the narrative to ask questions. These characters are the animated traditional puppet theatre characters, who interestingly speak in a contemporary ‘kick-ass-language’ of irreverent intellectuals and skeptical college freshers.

There are five different dimensions in Nina’s narrative. First, she sticks to a traditional miniature style Ramayana rendition, as seen in palm leaf manuscripts. Second, there is an incorporation of calendar images of Rama, Sita and other characters from Hindu pantheon. Third, the puppet theatre. Fourth, a contemporary remake of Sita as a Blues singer who is waiting for her ‘loving and hurting Daddy’ to come back. Fifth, Nina Paley and her boyfriend in animated forms, facing their marriage troubles.

One cannot take eyes away from the screen and one cannot shut up the ears for a while for the animation is so captivating and the music is truly blues. The music used in this movie is from Annette Hanshaw, one of the noted Blues singers of 1920s. When the movie was released, Nina went into trouble as she had to pay a hefty amount for gaining the copyrights of the music.

Nina weaves in her personal life; her life in NY city, Trivandrum (Kerala, India) and Brooklyn, her marriage and break-up happened during these sojourns. Ramayana came to her when she was going through her marriage blues and she understood Sita in an intimate way.

The movie, though not commercially released in India, has won several awards. Some of the Hindu fundamentalists who have seen this found it objectionable and blasphemous. Nina is reported to have said that even some of the Left wing academics had criticized for her political incorrectness.

Copyright issues made her aware of the problems that she could face in distributing this movie. As a part of the copyleft movement, Nina allowed her ‘Sita Sings the Blues’ to be distributed through internet. Currently it is available in several different downloadable formats.
Posted by JohnyML at 10:25 AM

Bring Sita home with a DVD of
SITA SINGS THE BLUES

Sita is a goddess separated from her beloved Lord and husband Rama. Nina is an animator whose husband moves to India, then dumps her by email. Three hilarious shadow puppets narrate both ancient tragedy and modern comedy in this beautifully animated interpretation of the Indian epic Ramayana. Set to the 1920's jazz vocals of Annette Hanshaw, Sita Sings the Blues earns its tagline as "the Greatest Break-Up Story Ever Told."

Need another reason why? Check out Roger Eberts Review! http://tinyurl.com/ebert-on-sita