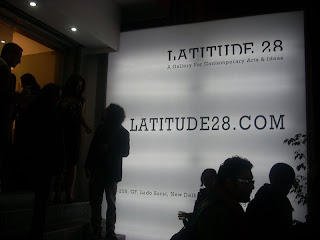 ‘Latitude 28’, the much awaited gallery of Bhavna Kakar opened in New Delhi’s own art district, Lado Sarai on 18 February 2010.

When Bhavna Kakar left Art and Deal Magazine and her association with Art Konsult Gallery, New Delhi, it was clear for all that she would come up with something ‘new’ because everybody knew that Bhavna could do it.

First she showed her individual strength at Travancore Art Gallery by curating a show titled ‘Recycling’. She was supported by Aparajita Jain then.

Later she moved to the Daryaganj area of Old Delhi to establish Latitude 28. And she knew very well that the gallery and her future plans would not work from there thanks to the laid back nature of the place. Soon the decision came to move to Lado Sarai.

Bhavna, now strikes the scene with a double punch. She has not only established her gallery but also launched her art magazine, ‘Take on Art’. The first issue ‘Take Black’ is guest edited by Shaheen Merali. (The review of the magazine will soon appear in this blog once I finish reading it, cover to cover)

On 18th August 2009, Bhavna had thrown a party at the Park Hotel, New Delhi to declare the arrival of ‘Take on Art’. It was a splendid party as it took place on the eve of India Art Summit second edition and on the birthday of the well known artist Chintan Upadhyay. The cake was ‘yummy’, a word our dear artist friend Manjunath Kamath would not like to utter.

The journey of an always smiling, screaming and prodding Bhavna is quite spectacular. Perhaps, it is not spectacular for so many movers and shakers in the art scene, but for a person like me it is a commendable feat because it exemplifies the success story of a young girl from Chandigarh, migrating to Delhi and making it there, with some help and a lot of resistance.

Bhavna came to Delhi after finishing her post graduation in art history and criticism from the MS University, Baroda in late 90s.. Yes, she was a go getter at that time. She befriended artists and art scene personalities. She faced all what a single woman would face in a big bad city. But she did not give in.

Art and Deal Magazine was on the staggering feet after Meena Tagore and Vijayan Kannanpally left the team and Siddharth Tagore took up the responsibility. Siddharth, the mildest man in the art scene roped in the young and vibrant Bhavna to hold the reins of Art and Deal. It was then Delhi could give a competition to Mumbai in terms of publishing art magazines.

I don’t know the circumstances under which Bhavna decided to leave Art and Deal. But that is not important. One has to move on and now we know that Art and Deal also has completed its ten years of existence and it too would do its best to be there, worth reckoning. Time is the best judge for all that.

Latitude 28 is a different gallery mainly because it is not run by a corporate, a business house, a business family or an ex-artist turned curator and gallerist or fashion world magnets. Latitude is run by a trained art critic who has proved her professional skills as well as business acumen.

It is a time to celebrate because it is a gallery run by an individual, who still fights against all odds.

All these years, Bhavna has earned a lot of friends. That does not mean that she does not have any enemies. Her detractors are abundant all over and they have their own reasons to criticize her.

The opening show of the gallery, ‘Size Matters..or Does it?’ is good- nothing more nothing less. Hope Bhavna would apply her curatorial abilities more into this department in future.

Well wishers from all over the country came to the opening and wish all the best to Bhavna.

Dear friend, it is a new journey….wish you all the best… And always remember the journey is more important than the destination.
Posted by JohnyML at 10:08 AM

Yes Johnny.. a very well articulated piece on Bhavna..Wishh her all the best. Gopal

Mr. Neeraj Gupta is well known sculpture Artist in Delhi India. His expertise includes marble sculptures and while painted wood sculptures. There is a great demand of sculptures carved by him in India and abroad for beautifying hotels, schools colleges, showrooms etc.

You'll have to determine what fits within your budget and what you can expect from a hotel in that price range.