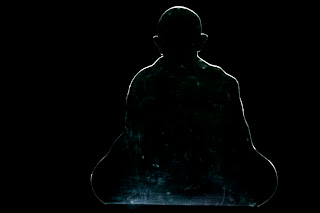 There are some occasions when you feel that you should have been twenty years or something. But what to do, you are already reaching forty one year old and think that it is nasty for others if you behave like a twenty something guy.
Today, I am with these young art professionals namely, Anubhav Nath, curator and director of Ojas Art Gallery and the founder director of Ramchander Nath Foundation, Sukesan Kanka, artist from Kerala, Vicky Roy, photography artist from Delhi, Hindol Brahmbhatt, artist from Ahmedabad and Pramesh Surti from Pardi, which is now my second ‘professional home’.

We are in the land of Mahatma Gandhi. And suddenly we feel that we are all of the same age. We are all share the same experience about Gandhiji. We all understand Gandhiji in the same way. Age does not matter when it comes to the issue of looking at Gandhiji. You get a feeling that, this man does not give you a chance to have a complete hold on him. If you want to have complete hold on Gandhiji, you need to become one with him. For the time being, it is very difficult to become one with him.

I remember the painting of one of my artist friends, Manjunath Kamath. He has painted a work titled, ‘Trying to Sit Like Gandhi’. In this painting you see a man sitting in complete isolation and tranquility, emulating the stillness of mind and body. For the artist, these are the qualities that define Gandhi. You can be tranquil, you can be still and you can try to be at peace with yourself, then you experience a sort of Gandhiji in you. Let me tell you it is very difficult.

I am here in the vicinity of Sabarmati Ashram, which Gandhiji set up once he landed up in Gujarat from South Africa. Gandhiji set out from here for the famous Dandi March in 12th March 1930. His intention was to break the salt law implemented by the British Rulers. He had taken a vow that he would not return to this Ashram until he snatches Indian independence from the British rulers. He did gain that on 15th August 1947. But he could not come back to Sabarmati Ashram as he was involved in healing so many political wounds inflicted by the Indian independence on the political body of India.

So today, Sabarmati Ashram stands before me as an unfinished project. Gandhiji’s promise is not fulfilled. He gained the freedom for India. But he did not come back to this place. So for me this place looks like a place, which is haunted by Gandhiji’s soul. So many people come here every day. When we are there to do some preliminary arrangements for the artists’ visit tomorrow, we see so many people, so many of them, still coming inside the Ashram, spending time there, looking for the invisible Gandhiji.

Perhaps, we are also doing the same. But this time with a difference. Last time I and Anubhav had come here to do some research on the Dandhi March. Today we realize that our mission has got a different dimension. We are going to come to this place tomorrow again with a set of fifteen artists from all over India. I am sure that they are going to look for Gandhiji here. I am also sure that Gandhiji is somewhere around here because he has not yet fulfilled his promise of coming back.
Gandhiji has a daily meeting with the visitors here. If Gandhiji is alive in any place in India, I feel that it is here, it is here, it is here in Sabarmati Ashram because it is the place that he had left with a hope.

Vicky Roy has already clicked the best Gandhiji image he could ever gather from there. Like an apparition the image comes out from the darkness of a museum space. And Sukesan later on tells me that he has already found the ‘energy corner’ in the Ashram. He has already started asking for a canvas. I ask him to wait for two more days. These guys are gull of energy.
Then Anubhav reminds me that this year is going to be the 80th anniversary of Dandi March. Yes, I said Anubhav reminded me of this because we had been informed of this a few months back during our research trip.

It is very important to forget things. Forgetting makes the remembrance much poignant and meaningful. Our project is meaningful because most of the people in our country have forgotten about Dandi March and its 80th anniversary. This project is a way of remembrance.

That’s why we see a lot of ‘Gandhiji’ images in Face Book and in artists’ studios ever since we announced this project.
When someone remembers, remembrance for others becomes a game. And to watch that game is an interesting thing.
I cannot participate in that game. I am no longer young to play that game. I can sit in the sidelines and watch and see the kids playing the game. It too is a learning experience.

In the evening, we visit Hindol’s studio in Ahmedabad. Hindol is a participant artist in the project. He has good spirits and has done a lot of works on Gandhiji.

I want to drown my age in some spirit and I do that in Hindol’s studio.

That is the only way to join the friends in their twenties and feel the way they feel about things.

Suddenly I realize that they feel the way I feel. Exactly like a forty year old man feels.

Sabarmati has made all the difference. They have met an old man there. They have met Gandhiji somewhere there.
I don’t ask them where because it is good to leave certain things unanswered.

hi,
I m Kumar, journalist with times of India based in Ahmedabad. i just read ur blog and intrested to know more about Gandhi project.
If u like to share, u can reply kumarmanish9@gmail.com