Anyway, This is not My Story 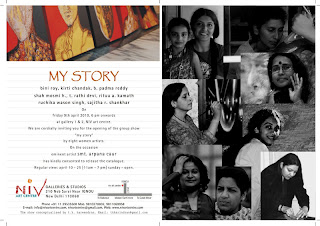 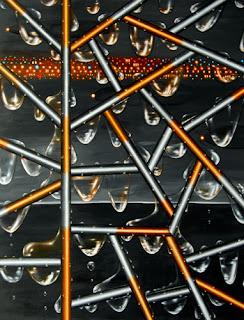 (Rathi Devi's work image is for representational purpose only)

Niv Art Centre, New Delhi, may not be a very popular gallery as of now. But it has all the potentials to become one as it has artists’ studios, residency spaces and three levels for exhibition. Located near the Indira Gandhi National Open University, Neb Sarai, Niv Art Centre is new to the art map of Delhi. Funded by an art lover and businessman, Shaji Mathew, the programs of this gallery are devised by T.K.Hareendran, a Delhi based artist. So far there were four shows and two of them were eminently forgettable. The opening show was by T.K.Hareendran himself, which had his paintings, photographs and a video. The fourth show titled ‘My Story’ opened on 9th April 2010, is one show that could have taken Niv Art Centre to places.

But….but this show featuring the works of eight contemporary women artists, namely Bini Roy, Kirti Chandak, B.Padma Reddy, Shah Mosmi H, Rathi Devi, Rituu Kamath, Ruchika Wason Singh, Sajitha R.Shankar failed to become one of the best shows in town mainly because of the conventional display strategy adopted by the artist director and my dear friend, T.K.Hareendran. The works are simply hung on the walls, whereas they could have become independent installations, transcending their nature of paintings and sculptures thereby generating a new idea about the art practices of these featured woman artists.

However, I do not discount the ingrained possibilities of this show. The show stealer amongst the artists is Rathi Devi with her four works generally titled ‘Password’. These paintings show four unidentified/unidentifiable women clad in beautiful burqua. These intricately painted burquas hide the person behind them, creating an ambiguity regarding the presence of a woman in the public spaces. Though burqua is related to a particular religion, in Rathi Devi’s works, it becomes an ornament that in many ways ‘covers’ the identity of women, irrespective of their religious leanings. The ambiguous presence of these women is so strong that it outshines the rest of the works. Had these paintings been presented in a dark enclosure, with spot lights highlighting the ornamented fabric and accentuating the deeper silence of the images, they would have created an absolutely haunting impression amongst the viewers.

I may be making certain unpalatable comments in the coming lines and my request is that the artists should take it as comments on their aesthetics not as opinion on their integrity as artists. Bini Roy’s works could be called naïve paintings. She paints flowers (Night Blooming Cereus) with certain amount of passion but unfortunately the viewer is not any position to share that as the works do not have any painterly quality. Most of the artists in this show are existentially inclined. Ruchika Wason Singh, in her works on paper, tries to bring out the private/domestic moments into the public realm. Her works remind the viewer of the early works of Nalini Malani, therefore lacking in freshness. Ruchika should not have attempted an installation, or she should have found out a strategy to present the paintings as a part of the installation or vice versa.

Kirti Chandak, in her watercolors on paper, attempts to capture her ‘dream realities’ in selective visuals. At times, she is successful in doing it and at other times they make the viewer to think about Jogen Choudhury than herself. B.Padma Reddy’s graphic prints show the performance of a protagonist who is the artist’s own surrogate self. Padma has done her job well though she does not move out of the conventions of traditional printmaking (she openly admits she loves to do print, which is her only medium). Shah Mosmi H, has semi-abstract works with a lot of texture and symmetry. It could be her story, very neatly done, but does not covey much to a viewer like me. Rituu Kamath’s painterly mixed media works represent a particular mental state of the artist, in which she feels herself as caught in cells and she retains the hope of liberation by painting creepers moving through the holes. She should have definitely avoided doing that sculpture. Sajitha R.Shankar’s existentialism takes the shape of expressionist paintings. But Sajitha, isn’t it an overplayed lingua, which has become a worst cliché?
Posted by JohnyML at 10:44 AM

Mr. Neeraj Gupta is well known sculpture Artist in Delhi India. His expertise includes marble sculptures and while painted wood sculptures. There is a great demand of sculptures carved by him in India and abroad for beautifying hotels, schools colleges, showrooms etc.