Fragrance of Guava: Marquez and the Dubai Man 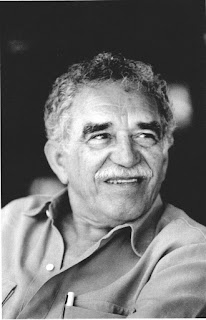 This posting does not have anything to do with art. But it is about human beings. So it should interest you, if you believe you are one among the formerly mentioned tribe.
On the way back to , my ticket is booked in a flight that goes via . I prefer aisle seats, a habit developed out of my company with Anubhav Nath, who thanks to his huge frame prefers aisle seats.
There are a few advantages in aisle seats. One, it gives you enough room to move your legs. Two, you always feel the angelic beings moving quite close to you along the isles wearing badges that herald their curious names like ‘Poonam’, ‘Nisha’, ‘Payal’, ‘Pinky’ and so on. Three, if you are a compulsive washroom user, there is nothing like an isle seat. Four, it gives you a false sense of self gratification; you have traveled enough by air and you are no longer interested to see things down there through the windows.
While the third is the first reason for many, second becomes the prime reason for most. Third reason is a very pressing one. First is an excuse and the last… that is a sub-conscious issue. None flaunts their sub-conscious on their sleeves.
This young man with a well cut French beard and a wife in ill-cut churidar suit are there already in the middle and the window seats respectively, as I find my place next to them in the aisle seat.
Suddenly I feel that this man could help Lady Macbeth who laments no perfume from the whole of could wash the smell of blood from her hands. I feel that a perfumery is toppled right next to me, drowning me into the dizzying depths of fragrance.
His wife, perfect round with a golden handbag for hub could have wheeled away anytime had she not been fixed to the seat with the safety belt.
I open a book, a book of book reviews written by S.Jayachandran Nair, my Guru in journalism and read a chapter on Gabriel Garcia Marquez.
‘Marcos’, the young man peeps into my book and reads.
I want to correct him, but I keep my cool. I don’t like people prying into your private world, especially when it comes to reading, eating and other things including sexcapades (sexual escapades).
‘Who is Marcos?’ he asks me. Suddenly a sort of innocence oozes out of this man’s soul and I could feel it. Here is a man, who has not heard of Marquez, I think.
‘He is a well known Colombian novelist and Nobel laureate,’ I tell him while trying hard to prevent eye contact.
‘What do you do?’ he asks.
‘I am a writer,’ I tell him. Perhaps challenged by that answer he scans my bearded face and asks, ‘Do you write for movies?’
‘Yes, one of my stories and scripts is in the post production stage,’ I tell him.
‘What else you do?’ he enquires again.
‘I don’t do anything else.’
‘Shall I borrow your mobile phone for a minute? My wife wants to speak to someone?’ he extends his hands to me.
I could not say no. His wife speaks into the phone. All irrelevant matters for me, which out of curiosity, I force myself to listen. “Where have you reached? Have you had your lunch? Don’t forget to latch the backdoor at night. Tell, auntie to buy that shelf etc etc.”
For a moment I feel offended. Then commonsense works for me. These people don’t have a mobile because they are not going to be in the country. They must be doing an overseas journey and must be their transit point.
While I wander away from my Guru’s words on Marquez, the man, obviously upset by his wife’s callous behavior of overusing a borrowed phone snatches it from her and hands over to me with a confident face.
‘Where are you going?’ he asks me.
‘ and you?’ I ask
‘Dubai,’ he says with a sense of elation, which can be felt only by those who have made it in the Gulf countries, where they can afford to live with a family, in a proper home with a car and other amenities. ‘I am settled in ,’ he reassures himself.
I realize that the sense of satisfaction comes not from knowing Marquez but from asking a question like, ‘who is Marcos’ with a lot of confidence; living in a hyper developed place like Dubai with no give and take with the world around him.
Here I find a man with no existential angst. A happy family with its concerns moving around a latch and lunch.
The flight takes off. I don’t read anymore till we land in as I oscillate between the fragrance of guava and Arabian dreams.
Posted by JohnyML at 7:00 AM