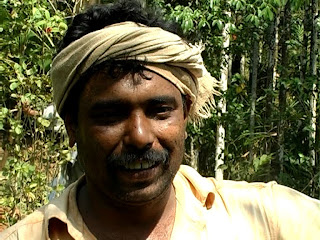 (M.P.Varkey, a farmer in Wayanad speaks of agriculture. Video Still from Kalpa Vruksha by Reji Arackal)

“I don’t understand the nuances of bio-technology. But I do understand one thing that those farmers who used genetically modified seeds in their fields now regret what they had done. After two or three harvest seasons, the fields stopped yielding. The earth is dead. Agricultural experts have told them to remove two feet of earth from the fields or add two feet of new earth. In the name of greater yield we kill our fields,” says M.P.Varkey, a forty five year old farmer from Kumbalery, Wayanad district, Kerala.
Varkey is not a celebrity farmer who has just received a Karshaka Ratna Award. And we don’t see him in a news channel. We see him in a four channel video work by Reji Arackal, a young artist from Wayanad district, currently settled in Greater Noida, Uttar Pradesh (NCR of Delhi).
I don’t call it a ‘video’ video art. And these days I don’t recommend too many videos either. Reji Arackal who holds a graduation in painting from Thrissur Fine Arts College and a post graduation from Kalabhavana, Santiniketan, also one of the young talents promoted by Sakshi Gallery, Mumbai, however qualifies to be called a video artist and this work a ‘video installation’. 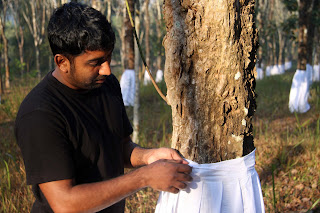 (Reji Arackal working on his Kalpa Vruksha Project 2008-2010)
This work, which has not been presented in so far (Sakshi Gallery will be presenting this work internationally soon) shows an artist’s commitment to his own background and reality. Hailing from a family of farmers, Reji Arackal looks at the changes that the agriculture scene has gone through over the past three decades. M.P.Varkey, the real farmer is a surrogate of Reji’s conscience, as he is the conscience of all those people who care for the earth.
Titled ‘Kalpatharu’ (a tree that fulfills every desire of human beings), Reji started working on this project two years ago. Over three agricultural and climatic seasons, Reji skirted around eight hundred rubber trees in three different hues; white, yellow and red. The task of executing this project was made further difficult as no farmer was ready to allow Reji to skirt their trees as it was exactly at the point where the skirt was tied, they tapped the tree for rubber sap. 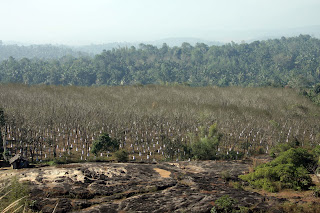 (A view from up. Kalpa Vruksha project in progress at a Wayanad rubber plantation)
Against all odds, Reji worked diligently till a whole village came out in his support. The local tailor stitched all those white skirts, and later in two different seasons, these were dyed into yellow and red by the local dyer. A host of youngsters came around to tie the skirts around the trees. Adjusting time between the tapping days and the non-tapping days Reji and his friends worked with great enthusiasm though it took almost three years to do it.
The three seasons of trees with differently colored skirts around their barks, as if they were forest deities, are documented in video that runs in three channels while Varkey speaks of his experience as a farmer and his observations about farming in general. 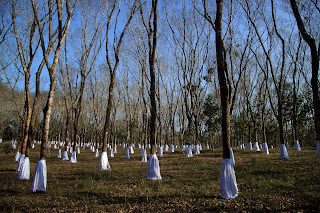 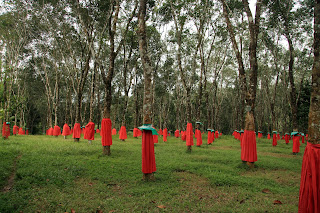 Each person, whether politically correct or incorrect should watch this video of Varkey speaking, several times, if possible twice a day.
Let me quote a few observations of Varkey, the farmer/oracle:
“Farmers are those people who rear up cattle for fertilizing earth. Each acre should have the presence of at least one cow. If they don’t do it and use a lot of fertilizers are not farmers, but they are planters”. 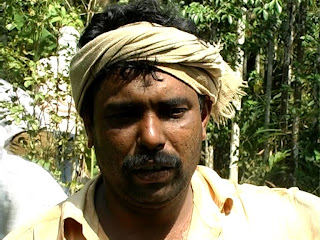 “Computer is good. But computer does not make rice.” 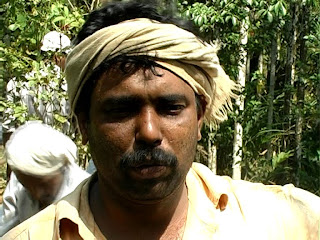 “Agriculture and its yields are not just about comfort and pleasure that come out of profit. But about Ananda (bliss) that you get when you live with earth.” 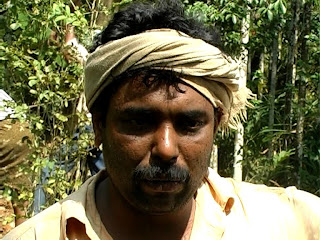 “My son may look at my brother who is a school teacher and try to emulate his career rather than following mine. But I don’t have complaints. You cannot make a farmer. You have to grow up as a farmer.” 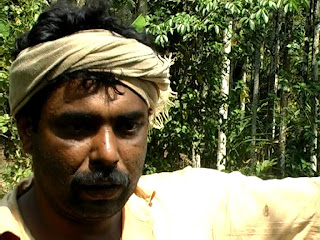 “The future is Agriculture.”
“Farmers will rule when they can decide their price. I am optimistic.” 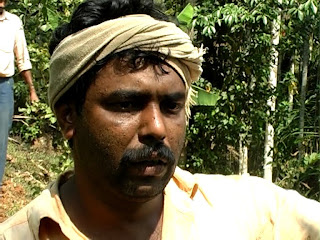 Today Reji is welcomed by the surrounding villagers to do projects with local materials and issues and they want to speak through an artist, not for seeking solutions through art but for articulating their issues to an audience about which they don’t know anything. They want to be heard through art.
Reji goes back to his village every other month to work with the farmers because he says, “I grew up in a farmer’s family. My father sold his agricultural land to become a planter. And I spent my days in my father’s existential dilemma as a farmer. Between earth and profit, each farmer is made to make a choice. If he moves towards pesticides, fertilizers and genetically modified seeds, it is not just for profit; he is made to go for it. The suicides are not just about poverty and debt. It has the dimensions of betrayal. My works address this betrayal through the stories of farmers,” Reji says.
Posted by JohnyML at 11:36 AM

Art with some heart! Thanks for sharing this Johny!