The Lame Lamb of Buddha: A Tribute to A.Ayyappan, the poet. 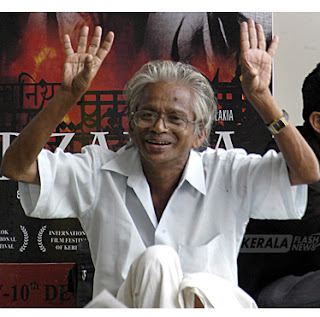 A.Ayyappan is no more. He was 61. Ayyappan was a poet who lived in poetry, friendship and spirit. Some even said, in his veins there runs not blood but liquor. A true bohemian and anarchist, Ayyappan lived for poetry and the romanticism, which is a natural import of it.
Like a homeless wanderer, like a gypsy he traveled through the length and breadth of Kerala, inspiring the youngsters to poetry and initiating them into the wonders of bohemian life. But in the new millennium he was a living anachronism. By then, the youngsters had learned to make money out of cutting music CDs and peddling it for friends.
‘The crowd was standing on the blood of the one/ Who had been knocked down by a road accident/ My eyes were on the five rupees note/ That had flown out from the dead man’s pocket/ I took it without being noticed by anyone/ Today’s dinner could be on this/ My wife and kids must be sleeping/ With their stomachs half full,’ wrote Ayyappan in his poem titled ‘Athazham’ (Supper).
Things are prophetic and fateful, when said by a poet. Destiny reenacts, at times, the incidents recounted by a poet, in his own life. Ayyappan was found lying unconscious in Trivandrum Central Bus Stand on 21st October 2010. The police took him to general hospital where he breathed his last on 22nd October 2010. 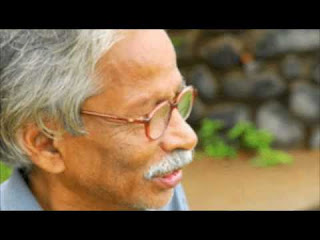 A.Ayyappan was declared the winner of the Asan Puraskaram 2010 by the Government of Kerala. He was on his way to receive the prize. And this time, from a destitute home in Pathanapuram where he had sought shelter and solace in his declining days.
Getting admitted to the , was not a new thing for Ayyappan. He used to get admitted there quite often for what he called ‘servicing’. The anarchist of all time, late film maker John Abraham used to ‘release’ Ayyappan from the hospital and together they went to the local arrack shop and later John got Ayyappan ‘re-admitted’ in the hospital. Again it is destiny’s game; Ayyappan breathed his last in the same hospital.
Ayyappan was always traveling. ‘There were two swirls in my head/Either I should rule the world/ Or I should beg for my life’, he wrote. Whenever he felt hungry, he went to any Press office and offered the editor a few poems, instant ones and got his money instantly. Ayyappan’s poems are crisp and short. Reason is that he offered ‘crisp and short’ poems for the value he got for them. He had decided to write small poems for small amounts.
And he never wrote big poems. He did not want to win an empire. He needed only small amounts to pay for the cheap drinks. 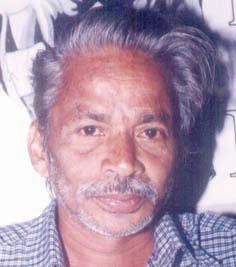 Aksharam Ayyappan; he was known like that at one point of time. Artist Shibu Natesan remembers, “Ayyappan used to come by a car, neatly dressed and sober. During those days he was editing the ‘Aksharam’ magazine. Slowly the deterioration set in his life. Perhaps, that was how he wanted to live his life.”
Ayyappan came in cars and sometimes he coaxed and cajoled the admiring youngsters to drink shops. Willing youngsters paid for his drinks as they thought the company of a poet like Ayyappan was the most fulfilling thing in their lives. Ayyappan was letting himself to be consumed by his admirers and they did not know any other way to admire him than getting him drunk and making him sing.
Kerala is full of Ayyappan-lore. Every young boy who was literally inclined and lived his life through 1970s and 80s in Kerala could not have escaped the Ayyappan influence. They all wrote poems and they all drank with Ayyappan. And today all they have a story or two to tell about Ayyappan, his poems and his life.
I too was one of those youngsters who were in the mesmerizing spell of Ayyappan’s bohemianism and poetic abilities. When I remember Ayyappan I remember a book that I had bought after a lot of hard work.
The book was ‘Changampuzha: Nakshtrangalude Sneha Bhajanam’ (Changampuzha:
The Beloved of Stars) by Prof.M.K.Sanu. Changampuzha was the Keats of Kerala; the eternal romantic who had succumbed to consumption, anarchy and love. I was carrying this book around and I too was a budding poet who had just published a few poems in magazines.

We, the intellectual and literary aspirants used to frequent the campus of Trivandrum Public library. Ayyappan was a regular there whenever he was in . He saw the book and snatched it from me and said, “I will return it after reading.” I couldn’t have stopped him from snatching the book because he was a poet I had admired. And I knew it for sure that he was not going to return it.
One day, while I was showing him one of my poems published in a magazine, he gave me a dismissive look and said, ‘In Kerala, there is only one poet, that is A.Ayyappan.’
It was not arrogance and even if it was, we had taken it for his style. We enjoyed him saying that.
I used to take my beautiful girlfriend to the Public Library. Hailing from a conservative family she was unaccustomed to the ways of anarchists. I was a small time anarchist, a budding one. And you know, the girls of conservative upbringing usually fall for the anarchists because they find this anarchy so different and charming. 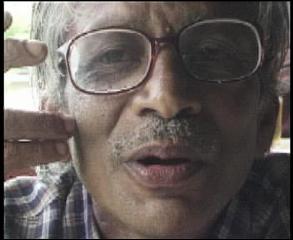 Ayyappan was enamored by my girl friend. He told her in a hush hush tone, ‘Darling, this guy is going to desert you. If you want to live with a poet, here he is and that’s me.’ My girl friend laughed it off. Ayyappan was not a prophet or something. But this prophesy of his turned out to be right. I had to leave her thanks to various reasons. Later she did not marry a poet. One poet is enough for one life time, she might have thought.
Today she must be remembering all those love laden words that he used to whisper into her ears in order to provoke me or to embarrass her.
Ayyappan is no more. Ayyappan was a phenomenon. And phenomena are not expected to be repeated quite often.
May his soul rest in piece.
Posted by JohnyML at 9:30 AM

ya he was a great poet !

In his last days, ayyappan often appeared in statue foot fath, in front of Marthanda varma staue in the yard of secreate builing. I saw him two times there. I gave him some rupees as he asked. He asked me more but I refused and abandoned him. I said him sunil gangadaran of koval, artist and gallery man, asked about him. But he refused to go there. I said him to go to ponnani, when shaikh sainudheen maqdoom's darga situated. And said him donot stay back at travancore. He looked me with surprise. But he didnot get my message to go to malappuram, as well as, I was also not concious of what I said.
He fell down at thampanoor busstand and some says it was an accident and died. His deadbody is awaited to be cremated.

We in our campus days, was very much facinated by his peoms, and his peotry still haunts us..............many memories are associated with him.....

Very sad that we don't meet him in trivandrum anymore...
It was poetry running through his veins.
My salutes.
Thanks,

As all of you said, he was really an interesting man and a poet. Everyone who grew up in 1980s and 90s has something to say about him.

@Shanavas, I have been following some of the comments below the postings on Ayyappan's death, by several FB members. Some of them commented that none came forward to help Ayyappan. I am sure, you are different and you tried to do something. Kovalm Sunil has always been a great friend of Ayyappan and all of us. He must be having his own reasons to do so. I am so thankful to you for telling me about your last meeting with Ayyappan.

Dear Jhony,
I met Ayyappan during my college days, when I myself thought what I used to write were poetry. It was a chance encounter.

Drunk, lost and at time fumbling he shouted poem from dais…If I correctly remember, Ravunny, Deshamangalam, Vinayachandran and some others there on dais.. Later in the company of some students in the evening while others were drinking he continued to gulp. Whenever he put down the glass he would mumble “ Kavitha Karuthanu…(poetry empowers you….)

Four years before, at a DC bookshop in Calicut I met him again. As always (perhaps…) he was drunk. He forcefully put one of his books in my hand, which I already having one at my home, and said “buy this…this is the only literary work you will find in this entire book store…” I kept silent and took the book with me. Then on a second thought he took away the book from me and said “otherwise forget it ...if you buy this poetry it will go to the publisher’s kitty…better pay me, the poet, that money….”
And he kept the book back into shelf and took the money…

He has certainly lived his life the way perhaps he believed, like Jhon…Surasu…an anarchist. No society has ever accepted an anarchist and an anarchist a society. His life was his choice. The way he died may be disastrous for us, but for an anarchist it is a choice….

As his poems, his smile from the innocent -non- innocent face never die. I remember he join us at Public Library canteen for evening 'bondas''.

It was a very touching recollection of your memories.

Yes, you have said it rightly...for us his death is a disaster but for him it is a choice..

tribute to his memories..