I am not alone- But I am not the only one 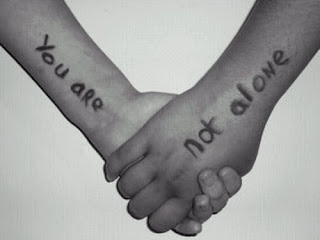 There is no heaven and if you want you can make hell down here, sings John Lennon. And he hopes one day everyone will join their brothers and sisters to live a life in peace. Then in the desperation of his times, Lennon says, you may call me I am a dreamer, but I am not the only one.

I just remembered the legendary song from the legendary group, Beatles, when I saw a status notification of a person in my FB. He says, “I am not alone.”

That’s a wonderful feeling. Being not alone is a wonderful and exhilarating awareness of one’s own existence in this world. You see people shifting loyalties, switching rows, turning their heads, rolling their eyes, smiling fake smiles, embracing with spiky hands and you see some people out and out negating your contributions, your love and your perennial right to be.

Then you think you are marooned in a loathsome island, where no mermaids sing for you and no sylvan climes nourish you. Horizon is very far and you don’t even have a piece of desire to wave at the skies and attract the attention of some lonely steamer passing by.

Now you may think that I write this because I have been spurned by some middle aged dame whom I met in a party or someone cursed me or even someone refused to recognize me. I am not talking about anything of that sort. I am a virtual person and I don’t have too many human contacts in the real world. So I don’t generally get hurt too easily.

And my virtual world is populated with good natured people who don’t believe in boundaries and bondages. Even in their imagined republics they don’t carry the passports of their nationality. They cross borders without fearing the menacing looks of the security guards and the obscene frisking of the ugly states.

It is a great feeling to be with people. My friend tells me, if the sadhu in this photograph, whom people worship by submitting their whole soul and body, happens to knock at their door I wonder whether they would call him in or send him out by flinging a coin of ingratitude into his begging bowl and a scorn at his benevolent countenance.

I am not talking about such hypocrites. I am talking about those people who selflessly understand and follow the lives of others in a realm where none is held by rules or laws of the states and no cctv records the kisses and crimes. Guns turn roses in this land of dreams and roses turn guns because none submits to none’s orders. They are ready to revolt.

Lonely people are not really lonely. They feel that they are with many. They are not alone. They are lonely because others have kindly let them to be lonely. They just don’t interfere in their lives. Another friend of mine says, those who go on a self negation spree in public and private spaces live for others. They don’t live a truthful life even before their souls. They have pawned it for something elusive called fame and something more flimsy called success. They want to be recognised and back-patted by others.

They are really lonely people. They don’t have any friends in the world. They may even have thousands of virtual friends but they just want the endorsement of a few and selected. They declare their freedom at the drop of a hat while they pay their homage to the state rules and laws. They enjoy the tickling sensation of state frisking through their private parts.

Hats off to my friends out there in the fb and elsewhere. We don’t meet. We don’t even intend to meet. But we are not alone. The karmic threads have bound us in an eternal chain of positive actions.

yeah johny... i am not the only one... so good to be in the virtual world and read your pieces :)