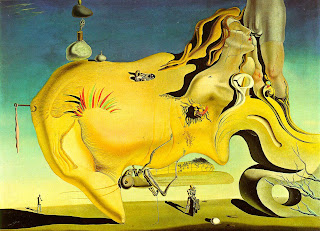 (The Great Masturbator by Salvador Dali)

In Orhan Pamuk’s earlier novel ‘The New Life’, the protagonist Osman goes out to find a new life and he seeks it in accidents, wreckages of buses and so on. After a point of time, he just hops in buses that are almost dilapidated and sure of meeting with accidents. Then he chooses those bus companies whose buses have involved in maximum number of accidents.

Death wish? Not exactly..It is an attempt to cross over to another world.

After a period, we see there is a pattern in everything; even in seeking death, even in encountering the worst and even in hoping for the best.

Routine and period stuff and that we call life. Have we become too much insular to pain and passion.

The other day, when I was talking to my artist friend he said, ‘You see something really wonderful and you say ‘wow’. This exclamation is a mental shock breaker. The moment you utter that word, a distance is created between you and the thing of wonder. On the next moment it ceases to be a wonderful thing for you.”

How true! We are always seeking for mental shock breakers not only amongst the wonderful but also amongst the tragic occurrences.

We look at life and we don’t allow time it to sink in, we won’t give time to ourselves to absorb the beauty of it. Before that we create innumerable mental shock breakers so that life too becomes a routine stuff period.

May be mental shock breakers are a necessary mechanism developed by human nature. It helps people to overcome the grief and live on. It helps the people to believe that tomorrow is another day.

But there are people who hold it silently, without allowing the mental shock breakers to curtail the flow of pathos and joy into their very being. They live in it and sink in it, but without making any public gestures or expressions. Like the calm surface of a lake they remain still reflecting the skies and the birds and dragon flies flit across it. But down inside, the deeper emotions will be fermenting to evolve as a new utterance.

That’s why two 80 years old expatriate Jews in America now travel back to Germany to participate in an alternative Olympics swimming competition. They don’t want to win any competition thought they want to swim and they want to tell the world and if there are any Nazis left there that ‘we are still here.’

But we have become addicted to our patterns and codified and predictable behaviours. We are expecting the worst all the time it seems so we don’t find happiness in the best but we would like to immerse the terror of the worst and to grow slowly immune to it.

It is what exactly happening in the latest Mumbai serial explosions. I have been watching the news, reading newspapers, observing the responses of the people in the social networking sites.

Most of the people avoided commenting on it. And those who commented said the usual things. Good Samaritans pasted the phone numbers of the police and trauma centres and so on. Some others posted gory pictures from the explosion sites. Some accused the terror groups. Some talked against the inefficiency of our police intelligence.

Our duty is done. We have distanced from the actual grief through our utterances. Perhaps, I too am doing that.

We are not letting things sink in. We want to talk and we want to be talked about so that we could create regular series of mental shock breakers.

One day we would even enjoy a virtual bomb blast effect in some Disney Like touristic spots.

I always ask myself what must be one doing after escaping from an explosion site. How does he/she deal with the trauma of the impact?