When Irom Sharmila Reclaims Her Sexual Body for Herself 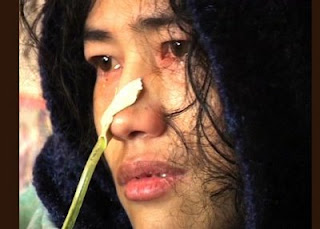 The followers of Irom Sharmila are an agitated lot today. In an interview published in an Kolkata based English newspaper, Irom says she is now in love with a forty eight year old British man of Goan origin, namely Desmond Coutinho. Thirteen civil rights organisations in Manipur have come together to ban the interview being published in local language. They say that this is a planned move to curtail the force of Irom's ten year old fasting agaist the draconian law of Armed Forces Special Powers Act.


Anywhere in the world, a person who stands up for the rights of the people and suffers immensily for it automatically gets an aura of a divine personality. The more he or she is in public the more he or she becomes an intensly aloof and inaccessible personality. The more the person becomes detached from the emotional and sentimental pangs of the milling masses the more he or she becomes an intellectual representative of all those feelings. Look at the film stars. They are very much there in our lives. They make public appearances and do live perfromances. But like a work of art they too are three times, in a Platonic sesne away from our realities. The latest case of Anna Hazare illustrates how a person who is so accessible to people could be detached from them once he gets an auro of a semi-divine personality. 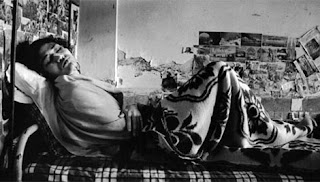 (The mother suffering for us)


So how an ideal could fall in love with a mortal being? Falling in love, the very expression is ideologically loaded. You don't 'rise' in love; but you 'fall'. This notion of falling has something to do with the myth of genesis where the human beings are created directly by God and then they sin out of their own will. So entering in a relationship with the opposite gender comes to have a connotation of going out of the 'ideal' realm of creation and enter into a zone where carnality is involved. When the working of the supreme soul is sidestepped in order to make the bodies as agencies for human bonding, as per the religious ideological views, it becomes a way of 'falling out of' God's favor. So even if you are in love, you, in fact fall into it. 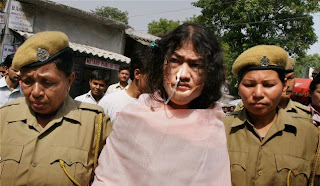 (A body claimed by the State)

Hence, Irom Sharmila falling in love with a man becomes a ideologically driven discursive realm for us as the idea of an ideal Irom Sharmila going out of the 'orignal' pristine purity of godliness and enterning into a social engagement where her body would directly enjoy the pleasures of that engagement. We sincerely would start thinking that the suffering body of Irom Sharmila, which is for us now is transparent and visible to our perceptions, desires and imaginations, suddenly becomes private, with mechanisms to control a person's desire and this body steps out of a the divine realm of public discourse into a carnal realm of private discourse.


In fact what appals us today is the fantasy of Irom Sharmila having sex with a man. This collective fantasy terrorizes us while it makes us equally curious. It is almost like seeing one's mother's nudity accidently. We as children all have seen our mothers' nudity while they change clothes or take bath. But as grown up people, we don't really like the idea of seeing our mothers' nudity. However, this is one possible area of our private desires where we would like to see our mothers' nudity. The very thought of it would terrorize us to the fact that we would rather prefer to go blind than having a vision of our mothers' nudity. We desire mothers as semi-divine personalities but the moment she shows the potentiality or her body shows the idea of having sexaul engagement with another person, we tend to feel threatened as there occurs a fear of not only replacing a Freudian father but also a son or daughter who could enter into a sexual inter/discourse with an ideal mother.

(Oedipus, a painting by Brian Curtis)

We are driven by this fear and we don't want Irom Sharmila to have sex with another man who would replace us as a collective. We don't think of her falling in love as another possibility of extending the discourse of social resistance against the draconian laws of the state, through the publicly claimed body of Irom Sharmila that now rebels to claim it back to herself.


What if Irom Sharmila decides to get up, remove her nasal tube, start taking food, make love with a man whom she likes, and would still continue with her protest against AFSPA? Would it demoralize us? Or should it? If so why at all? Or is that the fear that Irom Sharmila's abdication to the zone of love would eventually collapse all the myths that have been built around her for the last ten years, by none other than us?
Posted by JohnyML at 8:50 AM

Irom Sharmila's breaking her fast and choosing to make love to a man of her choice should not demoralise us. If such actions of hers break the myths that we created around her, let them break, they were meant to be broken.

The most beutiful thing in the world- the idea of love-sex is still the most misunderstood and often most hated....may be it will take thousands of years for people to degrade other things like cruelty and meanness more than love...

"Or is that the fear that Irom Sharmila's abdication to the zone of love would eventually collapse all the myths that have been built around her for the last ten years, by none other than us?"

It is interesting that you said "the myths that have been built around"; and myth as they (probably) are, the sooner they collapse the better. Regardless of her falling in or out of love.

Not the usual manipuri response. You will be well aware of Plato's myth taken from the Symposium ok it's by Aristophanes the equivalent of a burlesque director but it is the beginning of the view of a soul mate. Second the creation myth even of Xtians who don't approve of sex all that much but you understand. In Genesis it points out that God their creator doesn't even expect his creation Adam just to be content with him alone. First he lets him name all the animals but even with all creation it isn't enough so he splits adam in half echoing the story of the hermaphrodite from the symposium, and it is only when Adam finds his other half that he can become whole. I oversimplify official Manipuri objections attributing them all to the loss of power, of control and money that the few families who rape and plunder from your state would endure. They have many other tools yes but they are greedy. I am not overfond of Freud but neither do I join in Freud bashing that is now so popular among academics. I read an interesting piece by a post lacanian on her reclamation of the woman's body in apposition to the patriarchal body politic you might like it but I had a friend who is a lacanian take a look and he found it too turgid. I'll offer it to you anyway http://marxclub.wordpress.com/2011/08/06/thinking-bodies-speaking-law/