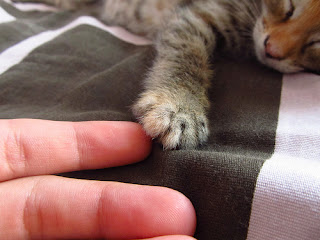 Touch. Each human being on the earth wish to be touched by someone. I am talking about the physical touch. The sublime touch of electrical fingers that would ease the pains from the tired flesh.

I am not talking about the touch that would eventually make one to unzip his pants and make someone else to part her legs.

I am talking about the touch of compassion, love and care. Some product advertisement says, there are thousands of ways of human touch. Yes, there are.

Vivekananda was sitting at the foot of Sri Ramakrishna Paramahansa. At one moment, Paramahansa touched Vivekananda with his toe. Something passed through his body. He fainted. When he woke up he was a different man.

A touch could change the world. When I see those tired people hanging in the buses and metro trains like carcasses in a butchers shop or sardines in a fish tray, I think they all want nothing but a caring touch- not the prying fingers that explore the softness of bottoms and fatness of valets.

Now we have lost the sense of touch. We have touch screens today. That’s why in the airports and ad pages of newspapers we see lot of invitations to the massage parlours. I like standing outside the glass doors of the massage centres in the airports and see young people touching the tired and fat feet of weary travellers. I have always felt going inside and getting it done for myself. But I resist not because of what they cost for a half an hour session but because it would leave me to a different plane which would make me miss my plane.

The girls who touched me in Bangkok were not blind. But their fingers were eyes.

When I remove the shoes from my feet, after a long days work, I feel the need for a touch. And I get it.

I wonder how identical twins satisfy their itch to touch.

So touch touch ....go and touch each other with compassion and love.

(Now an exercise for you. Go to google search, select ‘image’ search and type ‘Touch’. And tell me about all what you see there)
Posted by JohnyML at 6:20 AM

Enjoyed my first visit...more to follow....also to your other art realted blogs. Happy to be here.