The Evil Orientalist: Waswo hits stands with a Comic Book 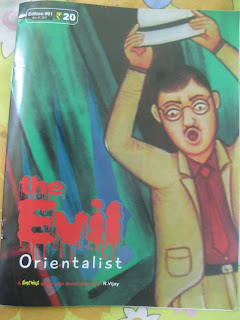 Waswo X Waswo has done it again; his faith in India, Indian life style, pace of Indian life, the beauty of the people here, the sound of the languages, the colours of the turbans and clothes and the transcendental purity of the mountainscapes, landscapes and riverscapes. 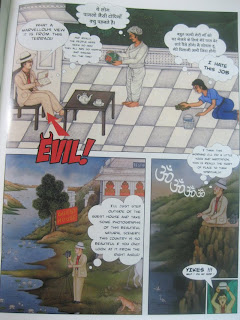 Waswo, the Udaipur based photography artist and an artist collaborator of the traditional photo-painters and scenery painters from the locality, writer, translator and friend of so many Indian artist has proved his faith in his latest comic book titled ‘The Evil Orientalist’. This book will be a part of his forthcoming solo show in a galley in New Delhi.

He has been in the middle of it for quite some time. Initially he came as a traveller and like many travellers from the west he too had found India quite an alluring place. Replete with contradictions and rich in cultural variety, he felt initially that this was the place where god could come and shake hands with you at any turn of the road. 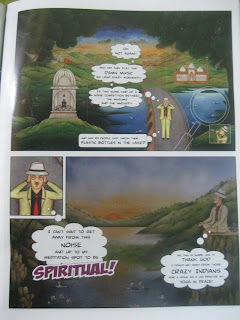 Hailing from Milwaukee in the United States of America, Waswo, since his childhood onwards has imbibed the sense of multiculturalism. He grew up when the idea of segregation and apartheid was rampant in the milieu of America and within that context he lived as a doubly alienated personality as he realized his different sexual orientation and inclination towards gender politics.

Having studied print making and photography Waswo travelled all over the world till he came to India and fell in love with Udaipur, the land of lotus ponds and havelis and palaces. In any love affair there is always a sense of doubt. Till you kiss it away it lingers on. And Waswo did kiss his scepticism away. 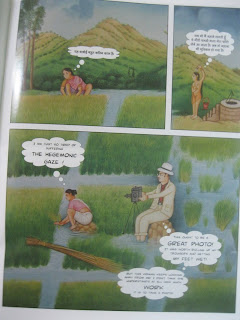 But the locals were not so lenient towards him all the time. They looked at him like any other Firang who had come to colonise them through money and white skin. It took a long time for Waswo to become their Chacha. Once the ice was broken he became the ladla of the local. Today he is a master artist and a craftsman who works with the local masters and craftsmen and never shies away from acknowledging them.

The comic book, ‘The Evil Orientalist’, which is less in pages than a usual comic book in India is a solace in the Indian graphic novels scene perhaps, mainly because most of our graphic novels that intended to be comic are really tragic while reading and seeing. Here, we have an artist taking up his own paintings, photographs and collaborative works as the crux of the narrative and pepping up it with newly painted scenes and scenarios. 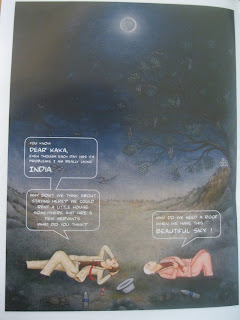 This is the surrogate story of Waswo himself who finds himself in the twilight zone of being both a foreigner by looks and Indian by heart. He is a compulsive photographer who tends to click before he licks. But people though they are not aware of the discourse on gaze often find it quite intimidating. But soon he gained the confidence of the people. Still the tag of an orientalist who looks at the eastern subjects through the discourse of the oriental formulated by the hegemonic gaze, as explained by Edward Said in his famous theoretical work titled ‘Orientalism’.

Orientalism was an appreciable genre of knowledge when it was benevolently used. But it became a tool of oppression later by many. There was a time when the orientalists where regarded as great scholars. Post-colonial studies have disproved the orientalist claims as they often viewed the east as an object to be scrutinized under a powerful gaze, controlled and categorized. 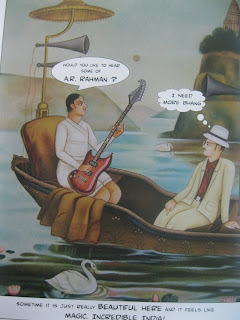 With this negative connotation of the word lingering around when someone suggested Waswo’s works were orientalist, it stung him deeply. This was a comment that sent Waswo thinking. This comic book is a result of this deep inner search for his original identity vis-a-vis his assumed one as an Indian, an artist, a man of alternative sexual identity, and a collaborator in creative works. 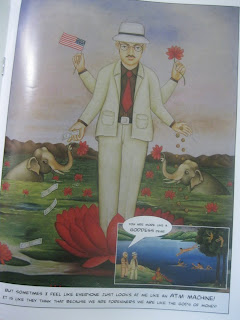 The Chacha, the young firang is seen sitting at his bungalow where the servants bring him tea and snacks. Waswo makes it a point that these characters speak in their respective language by using English and Hindi respectively in the thought bubbles. While Chacha thinks that the servants consider him as a gora, the servants in turn think that he has come here to exploit them. Chacha’s attention is on the young man who thinks both in English and Hindi, therefore educated, who mops the floor. Chacha’s interest is on his body in order to suggest his alternative sexual interests. 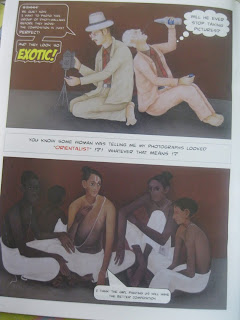 The mannerisms and apprehensions of a foreigner living in India as well as those of the Indians towards the foreigner is well brought out through the dialogue between Chacha and Kaka, an older man from the west. The scenic beauty of Udaipur and places around are captured by R.Vijay who has illustrated the text. 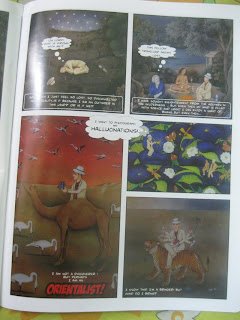 Waswo also brings in subtle critique on the Indian attitudes towards the foreigners by portraying Chacha as Laxmi who has this dollar back up. Besides, by evoking the Indian modern art historical references, Waswo positions himself within this discourse. He brings in Amrita Shergil’s famous paintings, the Brahmachari’s like a quotation and makes the central figure to say that ‘the painter girl could put them in a better frame’. Also Waswo uses the references of Raja Ravi Varma, A.Ramachandran and Surendran Nair, besides evoking a whole lot of miniature paintings. 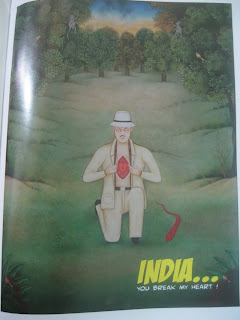 As post script Waswo has also jotted down 101 confessions that a foreigner/orientalist would make in any unguarded moment of sincerity and simplicity. 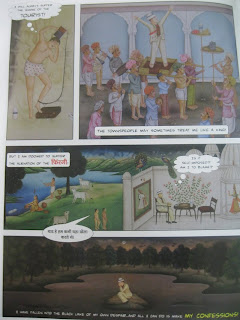 This is a worth reading book and collectible item, which is available for Rs.20/- (Rupees Twenty only). Good going Waswo....
Posted by JohnyML at 10:43 AM

Hope to get a copy of this work of Wasaw. I attnded his talk at NCPA mumbai and was really charmed by his work and personality. Thanks Johny :)

Thanks Johny...you say nice things...not sure if they are all deserved.