Importance of being Sasikant Dhotre at the India Art Festival, Mumbai 2011 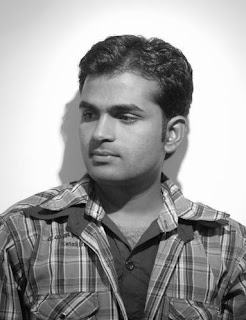 India Art Festival opened at the Nehru Centre, Mumbai on 17th November 2011. The building, from a distance looks like an old cuticura powder tin with chinks all over made by truant school boys from the kolivada. Some people say that it is a phallic symbol; siva linga (the phallus of shiva comfortably fitted into the Parvati yoni created out of the second floor terrace).

Anchor of the opening ceremony, Kanchi Mehta announces the name of the first Kalavishkar Award winner, ‘Sasikant Dhotre’ and a section of the audience erupts in an ecstatic applause. The award carries a purse of One lakh rupees, a certificate and a trophy. Artist Seema Kohli is the donor of the cash award. “There are millions of artists in this country and very few galleries to accommodate all of them. India Art Festival gives the interested artists a chance to come and exhibit their works in the Art Festival booths, of course against a payment. But a panel of judges would assess their works and give this award to the best amongst them,” explains Rajendra Patil, director of IAF and Kalavishkar, an NGO that has initiated this festival.

Kolkata based art historian and critic Nanak Ganguly, Delhi based artist Seema Kohli, Bangalore based artist Ravi Kumar Kashi and myself are the judging committee members. We have a very tough time in assessing the works as each work vies with the other to be the ‘worst’. The word worst is too judgemental and prejudiced. Most of the artists who take part in this section are either from small town art colleges or small villages. Many of them are self taught and many have not even exhibited once. There is a tremendous amount of naivety in them. They are innocent in many ways. They look at a Jitish Kallat sculpture exhibited downstairs and would wonder, ‘what’s the big deal? Any village craftsman could do it.’

One important thing that these artists who are not seen in mainstream (they are seen in Lalit Kala Akademies, Jehangir Galleries, Kalaghoda Pavement and so on), are quite convinced about what they are doing. And they are willing to learn too. The issue is that there is none to guide. For them the ideals are not Subodh Guptas and Sudarshan Shettys though they rake millions; their ideals are the village masters, MF Husains and local art gurus who have ‘made’ it. 
We are snobs and before we see try to see the truth of their art, we judge them as bad artists. Okay, if they are bad, then I would say the city’s upmarket buying class in total has bad taste because the second floor where these artists have exhibited along with my SOFA project attract more visitors than the high-brow-ist galleries and their exhibits in the ground floor.

In Delhi, it would have been different. Everyone would have appreciated or depreciated everything because here we have both totally ironed out aesthetics selected by a set of perennially prejudiced gallerists and market players who claim themselves as ‘judges’ and those cash croppers like Paresh Maitys and Jogen Choudhurys selected out of necessity by the judges as well as their representative galleries. 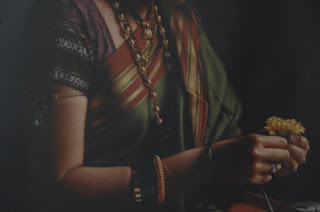 India Art Festival is a new model art fair with more democracy in approach and if it is successful in the coming years those galleries that have been sulking this year from participating would come in throngs and there would be several chances of the fair being ‘bought’ out by corporate houses from abroad. So Rajendra, be ready for a great cash gain. Create new accounts now!

Let’s come back to Sasikant Dhotre. As far as we, the judges concerned, Sasikant was the best out of the given number of artists in the second floor, who had booked their own booths and participated as competitors. That does not mean that Sasikant is the only one artist in the country at this given time who deserves this prize. It simply means that within the given he is the best. It is applicable even in the case of Skoda prize. If someone gets ten lakh rupees worth of Skoda Prize, there is no need to think that he or she is ‘the’ best. Within the given applications and given interests, he/she is the best; and that is the truth. 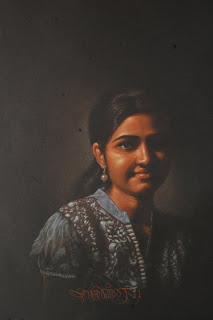 We, the judges came to a unanimous conclusion that this artist named Sasikant Dhotre, within the given context shows all the possibilities of growth and also show the potentials to experiment. Besides, he upholds the traditional skills of portraiture and shows a high amount of sensitivity towards the subjects that he deals with.

Now, who is Sasikant Dhotre? Sasikant comes from a place called Kolhapur. He is a self taught artist. He had spent two months in Sir. J.J.School of Arts and he left the course for reasons unknown to us. Perhaps, considering the skills, he was not ready to learn further from the college or other circumstances were not favourable. 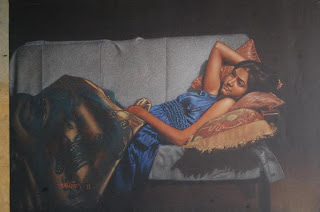 I have a special relationship with Sasikant Dhotre. I saw a few of the works uploaded in his facebook account almost six months back. Super realist works are everywhere in the facebook, especially those of nude women and I think I have a collection of such images in one of my folders. But this young man’s super realist works caught my attention. I thought this guy had something more to say.

So I went to his info, took his number, called him up and soon I realized that I was talking to a person who was not comfortable with English. So I switched to Hindi. My Hindi, for professional uses is as good as his English. Still we communicated and I told him to meet me when I was in Mumbai next. And my next visit was in September and Sasikant came with his paper works. I was astonished to know that he travelled from Kolhapur to meet me! I was thinking that he was a Mumbai based artist. 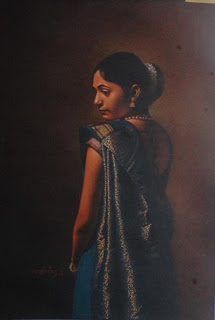 Sasikant works in a super realistic style. He is a master of draperies. Like the Renaissance and the Venetian painters, he shows his flourish in painting drapery. Though there is a little bit of male gaze in his works, as his subjects are mostly his family members whom he considers in the place of mother and sisters, this gaze is controlled up to an extent. Sasikant believes that he is a chronicler of the Maharashtrian life once prevalent all over the state but now pushed to the rural areas.

Sasikant selects events from the lives of the girls and young women. They are all seen either self absorbed or involved in doing domestic duties. Through the minute depiction of the paraphernalia, Sasikant features the ingredients of a rich style of life that is being lost out to the onrush of the mall culture. 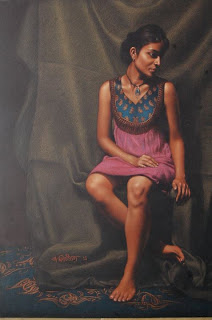 The brooding women in Sasikant’s works emblematizes the epitomical Maharashtrian beauty which in fact had become the focal point of the artists like Raja Ravi Varma and Mahtre, Dhurander and many other doyens from Maharashtra state. This rich tradition of painterly and sculptural portraiture is inherited by Sasikant.

However, there is a lack in Sasikant’s works; something that makes these works more contemporary than them just being the vignettes of past and a frozen life. I told him to find that out for himself and he promised me to do that. I did not know in September that I would meet the same artist in the India Art Festival. 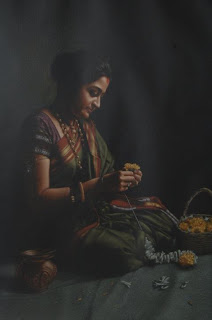 I did not have any qualms to suggest Sasikant’s works for the prize and to my suggestion all of my fellow panel members agreed without much ado. They had their own reservations and views about Sasikant’s works to which I too had agreed largely. Sasikant needs to grow further and this award is just a moral booster and reminder of his responsibilities for those friends who had clapped when they heard his name announced at the India Art Festival.

Art....yes, it is nothing but responsible interventions in our socio-political and cultural lives.
Posted by JohnyML at 11:05 AM

I love your thoughts on this Johny ML. It is an honest observation. Sasikant Dhotre's women portraits are very beautiful.Beauty is something that some artist often neglect when they produce art nowadays. Some Artist today have the notion that a signed urinal is art. I would not dispute that. But I do not see beauty in their work.

Good that he got a good guide in you.

SUSHANT
u such THE BEST ARTIST...