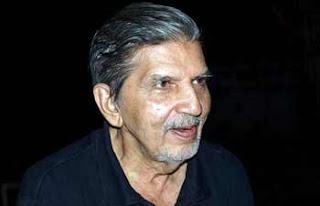 On 11th December 2011 morning around 10 am, in Goa, at artist Subodh Kerkar’s home, he was showing me one of his latest gadgets, an Ipad that he had bought from the Dubai airport while coming back after visiting the Venice Biennale. He showed me the books that he had already downloaded and was mentioning how easily now he could cut time now while waiting for some meeting to take place or a flight to announce its departure. As a facebook activist I was curious to know whether one could access facebook in it. He then opened the overtly familiar social networking site with a flourish.

While scrolling down his home page, I saw artist Norman Tagore’s status line, ‘Mario Miranda’. ‘Anything wrong?’ I asked Subodh. Mario Miranda, one of the most familiar names in the field of Indian cartooning and illustration, had been keeping unwell for quite some time. Anxiously we rolled the page down to see whether some other people too had said something about the veteran graphic artist. Journalistic instincts got worked up both in Subodh and me alike and we made a quick google search to see any updates on Mario Miranda’s health and we did find none. We felt some kind of emotional solace as we generally do not expect those people who have enriched our lives with their personalities and works to sing their swan song or make their curtain call. But that feeling was a short lived one. Within a few minutes, Subodh, who is also a pocket cartoonist for the Times of India, Goa edition, got a call from a friend which said Mario Miranda was now history. 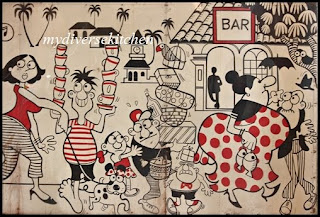 It was quite a coincidence that I was in Goa when Mario Miranda, who gave a different profile to Goa other than its touristic one to the world through his chronicling of Goan life through exquisitely complicated, breathtakingly revealing and aesthetically charming graphic lines. I had never got a chance to meet Mario in person. However, during my frequent visits to Goa during the last three years, I got a chance to imbibe the milieu that created the cartoons, graphic chronicles, hagiographic landscapes, characters studies and visual commentaries on Goan life by Mario Miranda. Gerard da Cunha, the architect, art collector, expert in Goan history and above all a close friend of Mario Miranda was instrumental in publishing a well documented volume of Mario Miranda’s works with well researched articles by Manohar Malgonkar and Ranjit Hoskote. In fact, this book was a great entry for me into the world of Mario Miranda.

A few years back, Gerard da Cunha had created a private museum of Mario’s works adjacent to his home designed out of exposed latterite stones, a special building material in Goa and a hall mark style to da Cunha himself and to one of the most talented architects from the same state, Dean Decruze. We thought it would be a befitting tribute to the departed master if we made a visit to the museum. While driving to the museum, Subodh received a call from his daughter, a young economic undergraduate student, from Mumbai. She told her father that in the Mumbai streets people were talking about Mario Miranda. We really felt great. In a country where the demises of politicians and film actors make headlines and the departure of artists make four inches news (M.F.Husain was an exception), if common men in the streets talk about the death of a cartoonist and graphic artist, it should be news. We felt really great. 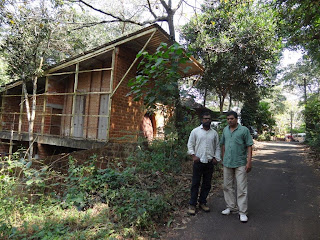 I am sure many people in many cities in India, and in many streets must be talking about Mario Miranda. Despite my status as a cultural activist, I too feel that I am one amongst those common men who could admiringly talk about the departed master. Growing up in 1970s, we all had the chance to see Mario Miranda’s cartoons in the then famous ‘Illustrated Weekly of India’. Under the editorship of Mr.Kamath, Mario Miranda literally illustrated the weekly that made it illustrious amongst the common men in India. People in those days came to know about cricket, art and Mario Miranda through the ‘Illustrated Weekly’. As a person who was born and brought up in Kerala, I got the first taste of Goa and Bombay through the cartoons and illustrations of Mario Miranda. Though I grew up with the cartoons of Sankar, Abu Abraham, O.V.Vijayan, B.M.Gafoor, Toms, Somanathan, Sukumar and none other than R.K.Laxman, it was in the cartoons of Mario Miranda that I got the life of a land with real characters that operated outside the political lives, which in fact had been the anchor of many other cartoonists especially during the turbulent times of Indira Gandhi and Emergency. 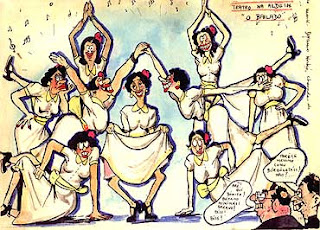 Speaking in retrospect, there is a little bit of Goa in everyone’s life. It would not be fallacious to say that it was Mario who gave a face to Goa and to certain extent to the Goans in Bombay. If Remo Fernandes gave Goan pop music to India, Gerard da Cunha, architecture, Wendel Rodricks fashion, Subodh Kerkar land art, earth mines, the politicians party hopping and scandals, beaches sunshine and alternative music and Sandra to Bandra, it was Mario who gave Goa to the other Indians with palpable and laughable characters. Had it been R.K.Laxman who gave a common man to the Indians the way Sankar had given the quintessential Gandhi, Nehru and Jinnah, it was Mario who gave the ‘common people’ of Goa to the world. Mario transcended the common people of Goa, their typical and typified characters rooted to their colonial past and the post-colonial present and he presented them as individuals with proper personalities like Ms.Nimbupaani, Miss Fonesca and so on. 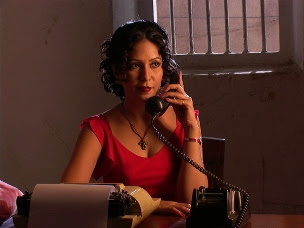 (Where is Sandra? Still from the Movie by Paromita Vohra)

It was Mario’s cartoons and the character of a ‘private secretary’, a sort of surrogate blonde in the Western imagination that led me to look for ‘Sandra from Bandra’/’ Where is Sandra?’, a short film by Paromita Vohra, an alternative film maker. Raising a critique on the depiction of Goan women in the popular narratives as women with not so tight morals and a bit of idiocy, in this film Vohra searches the origins of ‘Sandra’ she often comes from a place called Bandra in Bombay. It could have been a critique applicable to Mario also but Mario escapes from such feministic readings and critique because Mario approaches ‘Sandra’ with sympathy and love. Being an insider, Mario up to an extent typifies them but he does not make them the perennial stereotypes that could become ‘lap top’ private secretaries or vamps on order. A closer look would reveal that many such stereotypes in Mario becomes a stand in character for the common man as in Laxman’s world who remains a silent witness to all the good, bad and ugly deeds. 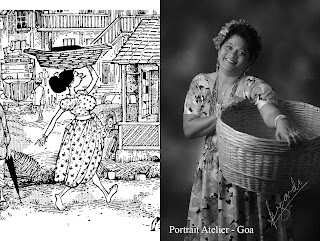 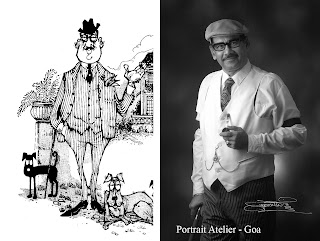 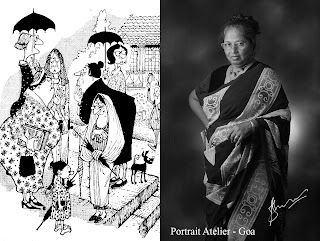 When Alex Fernandes, a Goa based photography artist who takes interest in Goan contemporary and past history through making character studies through the generic studio photography style, did his Tiatriste and Goan Musicians series, Ranjit Hoskote found a strong resemblance, though subconsciously inspired, between the characters created by Mario Miranda and Alex Fernandes. In this sense one could say that Mario was an inspiration to many artists including fashion designers, character designers and photography artists as Mario could portray the Goan people in their inherent personalities, characteristics, mannerisms often seen through an exaggerated lens tinted with humor and satire. This quality of Mario has paved way to the establishment of a sort of Mario industry in Goa and in Mumbai. Several Mario’s works are translated into mosaic tiles, post cards, cups, utensils, T-shirt pictures, murals and so on, at times with his permission and involvement and at times with no copy rights. 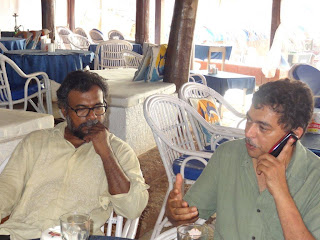 Born on 2nd May 1926, Mario was a true gentle man with a cut glass personality. “I have seen rogues making good art but here in Mario you see a gentle man making wonderful art,” observes Subodh Kerkar who had a rare opportunity to share a cartoon column in the Illustrated Weekly of India when he was a medical student. “I would consider Mario at par with F.N.Souza and V.S.Gaitonde,” says Kerkar and also he insists that though the departed master had been conferred the Padma Awards (Padmashree and Padmabhushan) by the government of India, the state government of Goa is lacking in perspective and vision as it could not honor the legendary graphic artist. While giving innumerable telephonic interviews to the journalists Subodh asks them to make demands to the state government to award Mario Miranda with the highest award of Goa, the Gomantak Award posthumously.

While guzzling down beer after beer in a moderately hot afternoon in a shack called ‘Flying Dolphin’ at the Calangut beach in Goa, with Shaji Mathew from Niv Art Centre, Mrs and Mr. Peter Mueller, Indian art collectors and gallerists from Munich, I listen to people talking about Mario. What more an artist could have asked for in his life?
Posted by JohnyML at 1:10 PM

its very sad. we have lost many good people this year. starting from husain to Mario miranda.

Very nice, heartfelt tribute. I enjoyed reading it very much.