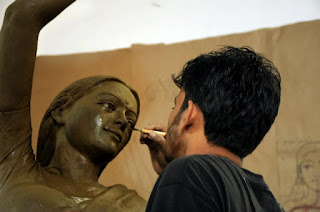 One of my young artist friends in Facebook, Vineesh Vijayan asked me a question. I quote him:  “I have a question. Many artists are doing installations art using perishable materials like paper cups, house hold items, tooth picks, body fluids etc. In one of Vibha Galhotra's installation 'New Cultivars' she used Grass.

My question is will works made out of this kind of perishable objects have market in Contemporary art Industry ?

How much importance should an artist have to give in choosing right materials to do installations?

I think it is very pertinent to answer these questions. I could have made it a very private dialogue with Vineesh, however I think it is important to share with other friends who perhaps have similar questions but don’t find an opportunity to ask. 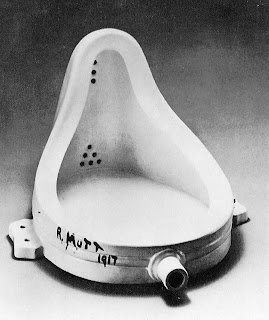 First of all let me try to define Installation Art. The origin of installation art should be sought somewhere in the second decade of the 20th century (exactly in 1917) when Marcel Duchamp brought in an industrially produced urinal into the context of art and called it a ‘Fountain’. In the same vein, Duchamp attempted a few more works using cycle rim and stool. Also his drawings like ‘The Bride Stripped by Her Bachelors ‘showed the possibilities of installation art. Art historically speaking installation as a genre of art was not formulated theoretically during the first half of the twentieth century.

However, the Cubists and the Dadaists attempted at various ‘assemblages’ though small in scale, which could be called the precursors of installation art. In India, Abanindranath Tagore had done some kind of installations with found objects in 1920s. Installations, if you observe always had found objects or objects that were not included as dignified ‘art materials’ as the major component. The artists put them together in certain ways in a space of their choice in order to evoke some sort of objective realities or a new meaning to the given objects. 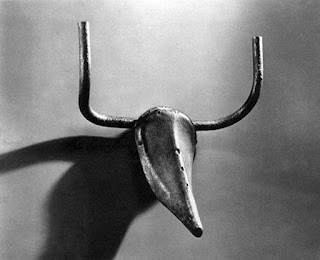 ‘Installation’ comes from the word ‘install’. But going beyond the surface meaning of it, we could discern that in the classical or renaissance or even the late 19th century art traditions, the word installation was not used for ‘installing’ works in a given space. Instead, often the words like display or arrangement was used. Installation was strictly affiliated to the establishment of certain machinery or objects within an industrial or militaristic context. By the turbulent 1970s we see the seeping in of the meaning of this word slowly into the art scene.

Governed and controlled by the Western scholarship of art history, we should take this fact for granted that the idea of installation art came from a western aesthetic discourse. After the Second World War, once America regained its prominence over the world through economics and military aggression, notwithstanding the efforts of counter balancing by the then USSR, it could push the idea of commodification of anything and everything in the field of culture through aggressive marketing and militaristic incursions. The artists in the Western world including those from the US were not that happy with the politico-economic and militaristic strategies of the US during 1960s and 70s. 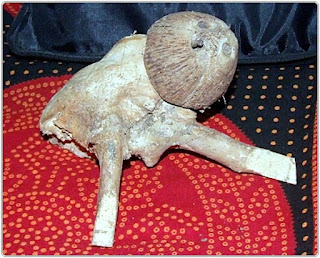 Dissatisfied by the growing commercialism and commodification of aesthetics, there was an effort to decommodify art by several conceptual artists as well as the politically inclined artists including the feminists. Decommodification demanded a sort of dematerialization. One has to do away with the object-ness of a work of art in order to de-materialize a work of art. At the same time, they had to strip the objects of their commodity possibilities. It was against this backdrop that many artists started using art povera materials (art made out of poor materials) and this was proposed mostly by the Italian artists.

This became a viable alternative for many and artists like Joseph Beuys propagated the very idea of turning anything and everything into art provided it is done with some level of intelligence. They sought perishable materials and unconventional materials in order to produce their works of art which came to be known as installation. Installation art attempted not only at making art using decommodified materials but also it attempted redefining the spaces around it. There was tremendous amount of site specificity attached to the initial experiments on Installation art. Joseph Beuys, Robert Smithson, Carl Andre, Richard Serra, Christo even Gilbert and George and a whole lot of feminist artists including Marina Abromovic (who used her body as a decommodified and defetishized medium) and Mona Hatoum could be cited as the early exponents of installation art using differently perishable mediums. 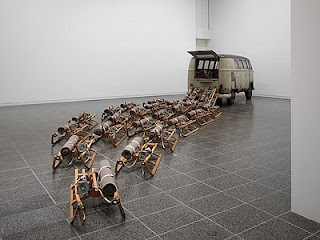 (The Pack by Joseph Beuys)

Initially installation art was successful in decommodifying aesthetics because the objects used by the artists were not the ‘collectibles’; either they were abominable or they were perishable. But slowly, by 1990s international museums started catering to the idea of installations and by the time the early installation artists have proven their mastery over the new language they had helped to establish. Once turned into masters, these artists were included in the museum shows and displays and even younger artists were commissioned to create new installations. India resisted installations till new millennium by keeping installations out of museums and galleries. But the inevitable commodification of installations happened all over the world as it became a trend in most of the art fairs and biennales.

Contemporary art market/industry has adequately allotted a space for installation art. Any art form becomes commodity when the market co-opts its different into its fold. Or else market would play up this difference for making it a covetable commodity. It often happens after a period of initial resistance. In India we witnessed resistance against installation art throughout the 1990s only to be co-opted by the new millennium. A movement becomes a ‘school’ when it is accepted by the market as well as academies. The street graffiti art today is one of the hot properties in the market thanks to Banksy. He resisted for a long time and finally he too had to succumb to the pressures of the commodity market. Only sanctity that he keeps himself is the anonymity that he has been keeping about his actual personality. 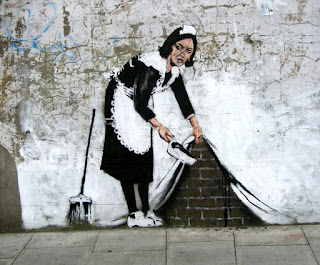 Installation art made out of perishable objects now demands its own ways of preservation. That’s why Marc Quinn, the British artist famously said that if the refrigeration fails his sculptures made out of frozen blood would become a pool of blood. Joseph Beuys installations made out of found wood, felt and fat are now preserved spending several thousands of dollars. Similarly, the ephemeral and temporal performances and performative installations are now preserved in commodity forms by making them into digital images or prints or movies. Documentation and archiving itself has become a form of art. Isn’t interesting to see a university setting up a post graduation program in performance art, while this art form is one of the most subversive forms of art that negate commodification and negates all sorts of grammar and structure?

The rise of installation art has a lot to do with the advent of technology, interdisciplinary approaches towards aesthetics and global resistance against market, military and political hegemony. The theoretical anchors of installation art should be sought in Walter Benjamin’s ‘Work of Art in the Age of Mechanical Reproduction.’ Structural linguistics and deconstruction along with the notions of death of author contributed to the production of installation art. Counter hegemonic ideologies helped the installation art practices to grow in a big way till they were subsumed by the very same hegemonic powers. 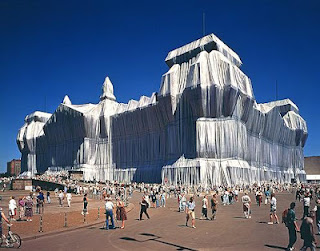 An artist who does installation art is and should be intensely aware of the material that he or she is going to use. Richard Wilson’s installation with crude oil is an interesting example of it. Christo’s use of clothe, Anthony Gormley’s use of iron and clay, Coco Fusco’s use of documents, Hans Haccke’s use of research materials and so on are the outcome of well thought out strategies. But unfortunately today many of our contemporaries use materials because they are just trendy and aesthetically appealing.

Thank you so much sir :) First time I am seeing Richard Wilson's Installation sir, it is really inspiring. Does that kind of work give artist any kind of financial income sir?