UAF in Baroda- In the Reversed Courtyard of Indian Art Home 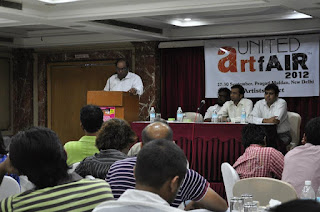 I still remember, during the boom years, one artist friend living in Baroda telling me about his and his family’s decision to move to Mumbai. He had already settled there in Baroda with a studio and a home. Still he thought Baroda was not happening enough. Yes, it was like that. During the hallucinatory boom years everyone thought that things happened only in the metros. The feast was always on in Mumbai and Delhi, nights were the nights of revelry, or people thought so. Wads of cash came in folded designer shirts. Wife met husband at the transit lounges of airports. Future children were stopped by the thin latex skins. Hotel rooms became the cauldrons of sin. Baroda was not happening enough then. But today, Baroda could be called a happening place. That’s why the United Art Fair team decided to launch its road show in Baroda itself.

As an art hub Baroda was always there in the world map of culture. But on 6th May 2007, Baroda was noticed even by the hegemonic American news agencies. Rightwing fundamentalists were prowling the streets and one of the artists was victimized for his bold expressions. His name was Chandramohan and his takes on the lives of Goddess Durga and Jesus Christ had offended the sentiments of the religious fanatics. Baroda was in news for the wrong reasons. It was the intervention of the hooligans in the Baroda’s fine arts faculty and their vandalizing of works of art set the clock backwards for Baroda. On that black day, the future of the fine arts faculty was more or less decided. It was not going to capture its lost glory. 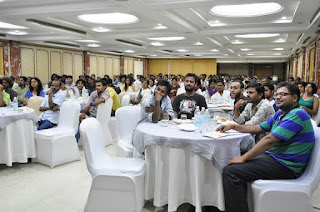 In Baroda, Summers are severe and long. Post Chandramohan Baroda was like a flat land of hopelessness cursed to undergo an endless summer. Artists were feeling the heat of it. They suffered it silently. And elsewhere the party was on. Hard Caur asked, where is the party? Even if Daddy was angry, girls and boys wanted to party. They asked where was the party tonight? DJs scratched and rolled discs. Even the Pappus who could not dance proved that they are good dancers. Baroda stood in silence and watched in pain. The artists wanted to migrate as the gallerists were going elsewhere for talent hunting. It was not so a rosy picture once the economic bubble busted accidently. For the cities it was like a party stopped half way through. It was like a raid during an illegal rave party. Songs were stopped halfway, a piece of choreography hung in the air like a chopped limb and frozen in time.

Then Baroda smiled. It was the time for the prodigal sons to come back. And those who had taken the decision to move away regretted their decisions. Today they are all happy in Baroda because Baroda is a city where artists live without restrictions. Baroda is a place where artists could afford a life that is suitable to an artist. One of the faculty members and an independent artist living in Baroda says, “Somehow, artists are happy here now. Buyers and collectors come, pick up the works and even if they pay not so big amounts the artists could pull it off well.” Today in Baroda artists do not float on money but they all feel that they could work from this city and prove their worth even if the campus recruiting gallerists no longer come here on Mission Harvest. 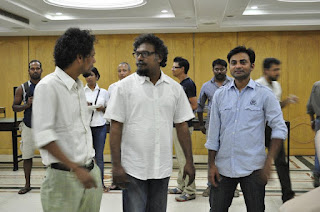 United Art Fair Founder Director Annurag Sharma showed green signal for Baroda because he was a person who had touched the right nerve of Baroda during the boom years. He was instrumental in transporting many a huge works by the contemporary artists fabricated in the Baroda studios. “I could see a vast difference between the artists who made it in the metros and the ones who lived in cities like Baroda. There were many successful artists in Baroda. But most of the successful artists got their works done in Baroda. There was a sense of tension there.” Today, the tension seemed to be over. Unlike in other cities where galleries sprout when business opportunities come up, it is one city where studios and residencies do a wonderful job. A few entrepreneurs had started artists’ studios namely Space Studio, Priyashree Studios, Rukshan Krishna studios and so on. Young artists are given a space here and in return they give a work to the studio owner; a beautiful arrangement.

Those who could afford an independent studio work from their own private studios. There are different kinds of studios in Baroda. The successful ones as well as the ones have good jobs and salaries work in highly polished studios. They keep the hardship and struggles of the youngsters a few paces away and keep themselves calm but busy in their air conditioned and sound controlled studios. If at all they are disturbed, they are disturbed by music only. One difference that music has got from an actual punch is that when it hits it does not hurt. So the artists live in a heavenly atmosphere. On the other side, there are artists who run their independent studios and these studios play the role of revolutionary hubs. Discussions are rampant here. There are studios where artists help each other. It is not so common a feature in art scene that an artist spreading out the canvases of an artist who is absent in the studio while potential people visit them. 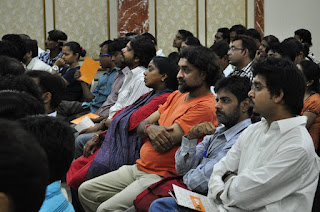 (Bowni and Kakoli with other artists in the audience)

United Art Fair team took the decision to visit Baroda because we thought that if anything could come out unscathed from Baroda, it should be strong enough to survive the test of the other cities. And we are proven right. In Baroda we had a quick trip to the studios where we met enthusiastic youngsters spreading out works for our perusal. They kept calling me just assure that the team did not miss their studios. We saw the works and thought that these young and emerging artists were doing a fantastic job. Many had already found their mentors. Many are still waiting for that eventual miracle to happen in their lives. They tirelessly show their works and they don’t switch on the fans as they fear that the paper works spread out on the floor would fly away. We sweat our love for these artists. I love them and my team loves them all.

On 11th May 2012 the artists congregate at the ball room of the Surya Palace Hotel and the 170 strong gathering has a lot of things to ask. It was our first presentation and for us it was an absolutely unchartered path. We were not hugely prepared with our presentations. Our presentation was all about how an art fair worked and how we wanted to make a difference. There were innumerable questions and we were ready to take them one by one and more than answering them then and there efficiently (though we had done that) we were learning a lot for the future. When I announced that the price of the booth was Rs.35000/- a young friend got up and said that he had been taking money from his parents all these six years in the academy and how he could further press them to squeeze out another 35000 for a show? It was a very valid question. And we offered solutions. UAF Founder Director Annurag Sharma categorically told the young artists that he wanted all of them to be on board with or without money and it was his mission to have them all. 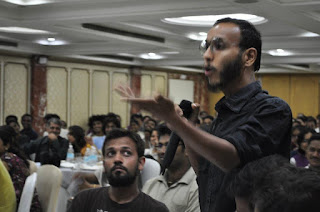 (My parents have been supporting me...Now where shall I find this money? An agitated young artist)

Baroda was a litmus test for us. Each question raised by the young artists sounded absolutely relevant. Though they thought the money was quite big for them (remember, no gallerist is hunting now for the talent in the flat ground of Baroda), they really told us that it was not too high an amount when it came to the benefits such an investment would bring for them. We suggested solutions in terms of getting sponsorship or two or three artists sharing the cost. We even suggested that we could make one to one deals so that there could be a decent way of presenting works without letting one party become a loser. Many artists wrote to me after we came back from Bardoa. They all want to be a part of the United Art Fair and we welcome them all.