The Games People Play: A Glance at the Indian Contemporary Art Scene and its Operational Methods 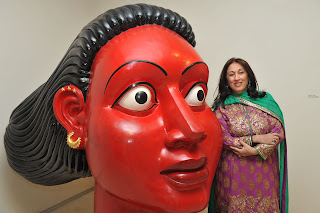 An artist friend of mine asks me, after reading my review on Pablo Helguera’s book on the Contemporary art style (dealing mainly with the ways in which the contemporary artists and other art players operate in the International art scene with reference to the American contemporary art scene) three questions: 1. Do we have a ‘king’ in the game? 2. Are the AW (an abbreviation that Helguera creates for Art World) games actively played in Indian art scene too? 3. Without public and private museums how do art collectors enhance the value of a work of art in Indian context? I thought instead of answering these questions in private it would be useful for many of my young readers who always say that they do not understand how the art world behaves, if answered them through a blog.

First of all we need to understand the premise of Pablo Helguera’s book. Helguera likens the AW as a game of chess and he chalks out roles for each player in this game. I quote from my review, “According to him, the King is a Museum Director, Queen is an art collector, Curators are the rooks, Dealers are the Knights, Critics are the Bishops and the Artists are the pawns. Like in a game of chess, the pawns are placed in front and are given freedom to move slowly, step by step. Their aim is to reach the King but there are many hurdles to cross. But unlike in Chessm, the pawns often try to please the rooks and the knights only to get the attention of the King. But all the pawns are not allowed to reach the King. In the process, many are stopped, discarded and eliminated from the game. However, once a rook reaches the final row and meets the King, he/she achieves a kind of power, which is very difficult to cut down by external forces.”  (for further reading please refer to my review http://johnyml.blogspot.in/2008/10/manual-for-surviving-in-contemporary.html October 2008) 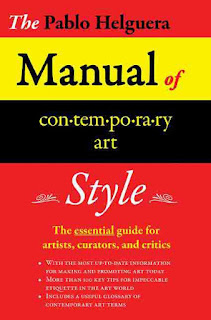 Now let us take the Indian scenario as an attempt to answer my friend’s questions. In India, for a long time since Independence we did not have any museums. Almost a decade after gaining Independence (1947), India’s first public museum for modern art was established in Delhi (NGMA 1954). It got its branches in Mumbai and Bangalore only in the recent years. As a part of the Nation Building project envisioned by India’s first Prime Minister, Pt.Jawaharlal Nehru, there was a spate of activities in the cultural front and in 1954 itself Central Fine Arts Academy (Lalit Kala Akademy, New Delhi) was also established. Besides, these there had been little efforts towards building contemporary museums in our country. Between 1960s and 1980s we see provincial efforts to establish contemporary art museums as autonomous bodies in Chennai (Cholamandal), Bhopal (Bharat Bhavan) and Chandigarh. But they were not established as museums in the strictest sense. The history of Indian contemporary art museums could be summarised like this. Shantiniketan was another centre of arts which has been considered as a living museum but ‘living’ without the premises of a contemporary art museum with its economic implications.

Today we have three actual private museums and two museums in the making. Delhi has two private museums to boast off: one, Devi Art Foundation and two, Kiran Nadar Museum. In Mumbai, Bhau Daji Lad Museum has a quasi contemporary museum operational format. Rajashree Pathy’s Coimbatore Museum is said to be in the making and in Kolkata KMoMA (Kolkata Museum of Modern Art) is also taking shape in papers. To do the reality check, we have only two museums that have economic activities and regeneration of financial and cultural discourses as a part of their annual plan. Devi Art Foundation, established by modern art collector Lekha Poddar and her son and contemporary art collector, Anupam Poddar was the first one to create a ‘King’ situation in the Indian contemporary art scene. Before that as a part of the general art market and gallery scene it was Amit Judge of Bodhi who brought in a ‘royal’ situation. As Helguera suggests, each pawn tries to reach the King by activities mediated through rooks, knights and bishops but all of them do not reach the king. In Indian context too during the first decade of the new millennium, artists worked very hard to reach Amit Judge through various channels. His presence and the presence of his gallery Bodhi, made many other traditional and established galleries to re-think their operational strategies. When a sense of celebration and royal splendour made possible by Judge became palpable, it became an unavoidable necessity for other galleries to follow the suit mainly because of the fear of falling out of grace with the artists who were actually the ‘producers’ of commodities. Even though Amit Judge has left the art scene without explaining why, he made a few more kings in the scene by showing how international relationships could be made through actual collaborations with other agencies and possible strategic permutations and combinations. Today in Indian art scene we have a few kings (in the absence of too many museums we have to see Galleries as temporary museums); these kings are the directors of established private galleries and even certain organizations. In that sense we have the kings/queens in the following galleries and agencies: Nature Morte, Project 88, Talwar Gallery, Mirchandani+Stienruecke Gallery, Maskara Gallery, Chemould Gallery, Volte Gallery, Chatterjee and Lal and Gallery SKE at the first level, Sakshi Gallery, Guild Gallery, Espace Gallery, Vadehra Gallery at the second level, Khoj, Sarai and Pro-Helvetia as agencies. Depending on the flow of the wind other galleries in India could get any artists to work with especially with the economic recession in place. 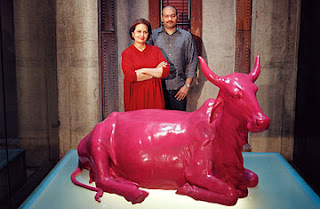 But the real King was Anupam Poddar. All the artists could not reach him despite having worked through the rooks and knights and bishops. A few reached him and they became big in the company of the king. Those artists who have been talking against homogenization of aesthetics and insisting on the need for diversified approaches to art stopped critiquing the homogenization of collections as there were not too many strong patrons like Anupam Poddar in the scene. Poddar’s collection, after Amit Judge’s taste, almost ruled the aesthetic direction of Indian contemporary art scene for almost a decade till he decided to call it a day and thought of de-accessioning his collection. Then came the current reigning King/Queen of the scene: Kiran Nadar. She is the Founder Director and supreme authority of her own Kiran Nadar Museum. Today, many of the works of art are done and exhibited thinking that Ms.Kiran Nadar would grace the gallery and artist with a benevolent eye. Though it is not much talked about, most of the art scene operators know for sure that many large scale works are done and promoted thinking that Ms.Kiran Nadar would acquire it for her collection. In my view, unlike Anupam Poddar, Kiran Nadar is more a futurist as she and her team have taken a pro-active step in co-opting radical art forms and embracing several interventionist art forms. Anupam Poddar’s Devi Art Foundation was an exclusivist and elite organization till he changed his mind in order to open up it for a larger audience through Sarai that has been mindlessly inviting every other artist to do ‘projects’ in order to establish its own legacy. In my view, and also historically speaking, Devi Art Foundation has ‘grown down’ from its historical role as the first major private contemporary art museum to another Khoj that was ten years back in its days of inception. Today, perhaps, Pooja Sood, the Director of Khoj is another reigning queen in the field of ‘fund based’ art activities. I do not forward it as a critique; but it is the fact and it is the history. 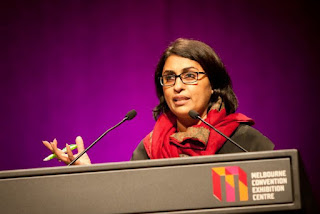 Coming to the third part of my friend’s question (Do collectors find the real value of their collections and enhance it even in the absence of Museums): Yes, is the answer. Any modern artist who fetches a few Crores in any auction is definitely an artist who has grown without the support of any museums. If we look at the history of our modern artist, we come to know that they all were passionately making art and they were blessed with aesthetically egalitarian and culturally polished patrons. Patronage is a glittering word from the past that unfortunately we have lost today. But of course, when artists do their works and in due course of time as they find their patrons in the form of galleries, buyers and collectors, there will be a simultaneous building up of critical literature and history around it. Once these things work together and create a conducive atmosphere for the production of art as well as the procurement of it, the value of a work of art would get enhance. Artists and collectors need to show patience. Art’s worth is determined by time and its ability to endure. Critical and historical literature is a must to build the value of a work of art. Most of the visionary collectors keep log of their collections besides creating an archive of literature around it. Collecting is a serious activity and a serious collector would naturally become a patron. So there is still hope in the scene, with or without museums. But we need more museums both in the private and public sectors because there is a sort of mutuality between various zones of cultural discourse that makes the art scene flourish by overcoming all negative thoughts and economic depressions.

I think this is a case of an ostrich burying its head in the sand and believing that the world is it sees in its head. The whole paradigm of the business of art being king and artists being pawns shows how commercial the writers view point is. Art is a spiritual activity and the artists are the kings, like jesus was the king. The church and the pope are not kings even though they might like to think so. Similarly the critics and museums et al are not kings but the dalals that sell the art that the real kings produce, ie the artists. The whole premise of this book and its criticism here is upside down.