What the Birds Said 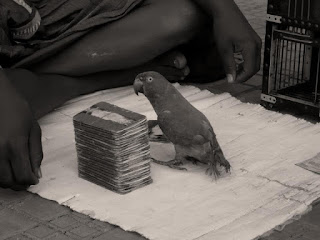 I have been expecting a day
When human beings would start
Speaking to flowers, clouds
Rains, trees and death,
Presently I realize that
Nature has been talking to us
All these while but all of us
Keep our ears closed with
Various tools of distraction.

It was her one drop of tear
That woke up my soul
From its lethargic slumber
It was a mere touch of her toe
That shook me out of all illusion
To a world of astonishment
It was her yogic trance that
She had gone into while talking to me
That taught me the lessons of silence.

During the days when all mirrors
Reflect our own images in thousand forms
Of illusion and passion
Like the touch of a stone that shatters
All illusions into a million smithereens
We all would wake up and see
The billion shapes of our existence
Getting reflected in a dew drop
Or in the cry of a simple bird
And flow into the river of time.

The girl who speaks to a bird
With multi-colored feathers
The old man who could make
A bird to pick out
The present, past and future
Of those sorrowful and helpless people
From rotting pictures of muted gods
Tell us the same truth.
Whether we believe it or not
Poems and the purity of soul
Are sung by birds only
A truth that had been, that is and that would be.

I was aiming at a bird in a distance
With the arrow of my arrogance and desire
Before I could launch it
She flew unto me and said:
Take me, I am yours.
She touched my rough fingers
With her soothing feathers.
It was only then I realized
That it was not in conquest but in surrender
The future of me, the people and of the country
Resided.

It is not before an army that you surrender
Not before the war cries of soldiers
Not before the blindness of ego
Not in front of the fake gods-
Say the forests, hills, rains, rivers
And their concentrated silence to me.

Our strength to surrender resides
In the knowledge and awareness
That we ourselves had exiled from
Our perturbed memories.
Let us walk back in search of those powers
When we realize that progress
Lies in any direction in a round earth
Let us retreat from the streets.
Through the trajectories of birds
Let us fly towards a universe of
The known and the unknown
And the one that is waiting to be known.
Posted by JohnyML at 9:37 AM

We want to use one of your image for academic purpose (non-commercial use) at ILLL University of Delhi (India), therefore we need copyright permission for the same. URL of the Image is given below: http://1.bp.blogspot.com/-y8cQQzMY0-M/T45b6nKWUkI/AAAAAAAAE8k/CvkJ6ShRCsM/s320/Lalita%2Bji.jpg