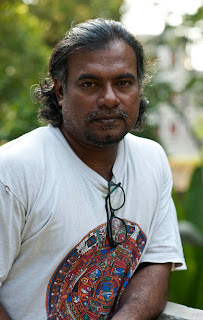 At the age of 44, I feel like an old battle ship that has participated in many wars. Looking at the scars on its body I fondly and proudly remember the battles that I have waged. Memories of fights come back and I think many could have been avoided. But the fights were inevitable and unavoidable. One could not live without those fights. Sometimes you lead one and at times you are asked to stand in support. At times you as a battleship is there to impose a threat and at times you are there to keep peace.

According to Indian laws and Hindu laws polygamy and bigamy are socio-legal offence. But at the age of 44 I realize that I am a bigamous person. I am married to two women: Saraswati and Lakshmi. They don’t like each other. When I am with one, the other turns her face away from me. I go and pacify the other and a fight ensues at the former end. But I know how to live with two women. People say one who has two wives will never experience peace. I feel it all depends on how you handle them. I am in pursuit of both of them. And I make them to pursue me too.

People talk about happy marriages. They reiterate the need for a happy home. Everyone pretends that families are self nourishing and care giving institutions. Most of us try to live according to the ideology-ridden pictures seen in calendars and advertisements. But at the age of 44 I prefer to go with what Aldous Huxley said in his ‘Brave New World’. Huxley said: ”Home, home- a few small rooms, stiflingly over-inhabited by a man, by a periodically teaming woman, by a rabble of boys and girls of all ages. No air, no space: an understerilized prison; darkness, disease and smells.”

You may think that at the age of 44 instead of growing positive towards life I have become absolutely negative. I am not negative at all. I realize that none can live someone else’s past and take pain on oneself for someone else’s deeds. I realize that the world goes on even without you. History is a reference point to understand what to be repeated and what not to be. I totally agree with what sages say that none understands anything more than what he or she already knows. It is just about unveiling of curtains.

At the professional front, I find hypocrisy and lack of faith in most of the people who are related to my profession, which is art. One good thing at the age of 44 I have learnt is to tell someone that I don’t like his or her work. I used to be polite when someone approached me with their works for an opinion. Now I tell them straight that what I like and what I do not. I have also learnt to dissociate from intellectuals because they too have club mentality and most of our intellectuals do not know life outside theories.

If anyone asks me how I want to go about with my life in the coming years, I would say that I am reassured about my intention to set up an ashram for studies, an archive for research and a museum for art. I still hope that this country would produce meaningful art. A year back I was fighting along with a few friends against the corruption in an art event. Today I see most of the eminent people support the same project saying that it is less evil than many other events. I do not believe in greater or lesser evils. Evils are evils.

At the age of 44 I think I have lost certain skills and gained some other skills. For example, I could cook fairly well. After many years I tried to cook again one day and I found myself failing miserably at that front. None is cut for menial works. But people are forced to do it. So they become skilful in that. I imagine a life where I need not do anything other than reading and writing. But such a life does not exist. A maid servant can screw up the life of a philosopher and put an actor in jail. A red flame from the gas burner could postpone important meetings.

Life is a gift given by god. It is a part of a larger scheme, which most of us do not understand. God is selfish like a child. He demands return gifts. We often forget to give return gifts. Every house is a dump yard of toxic plastic. We call it gifts. At the age of 44 I like a sapling coming out of a crack in a concrete building than a Bodhi tree that would offer me enlightenment against a payment. Thank you.
Posted by JohnyML at 6:08 AM

Home : Home, is not really just the Physicality of the walls and the Rooms, but what it makes is the feelings associated and the memories that one carry,the comfort level and the idea of being at peace with oneself is what makes it a Home!