My Public Diary 4: There is the Place in the Sun- Story of an Exhibition 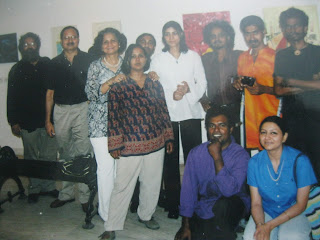 
Once again my termites inspired memories. An album tumbles down into my hands, safe from the attack of termites. I open the leaves one by one. Year 2004. If I were a film director, I would have montage-d the present with the past. I look at this image, taken sometime in March/April 2004. Mrinal and myself had jointly curated a show at the Krishna Gallery, then located at Defence Colony. The title of the show was ‘There is a Place in the Sun’. I had taken this title from a Steve Wonder song, ‘There is a place in the sun and there is hope for everyone.’ In fact the song was introduced to me by Shibu Natesan and he was planning to do a painting with the same title. When he heard that I was doing a show with a title like that he felt hurt. He expressed it to me by a mail. I think he had a very brittle ego then which he soon transcended. Today he could speak of Each one Teach one. 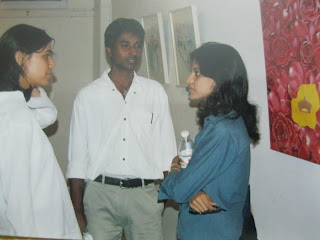 I want to write about this show or rather remember about this show for a particular reason. Before that let me introduce the people who are in the picture. From the left you see K.S.Radhakrishnan, Mr.Chandan, Krishna Chandan, Mrinal Kulkarni, (behind her) Binoy Verghese, Sunanda Khajuria, T.K.Hareendran, Shijo Jacob, Sajeev Visweswaran, Ritu Kapoor (now Kamath) and myself. One person missing here is Natasha Preenja who most of the people now know as Princess Pea. When I look at this picture I feel that Radhakrishnan should have been standing right in the middle of the picture. But he always likes to play down his presence especially when it is the show of youngsters. The good thing is that he goes to the shows of the young people, see the works and if the artists really want to discuss their art with him, he spends time with them. As the show was curated by us, Radhakrishnan came quite early and spent the whole evening with us. I look at his dress curiously today. Black is colour for the openings. Black is his hair and beard. Black is the bag that he carries. Today, instead of this kind of bag, he carries a camera bag with him. He likes to take pictures. He had learnt the technique of photography from veterans like Jyotish Chakravorty of the Image in Calcutta’s 1970s. Then ace photographers, Late Prabuddha Dasgupta and Pradeep Dasgupta became his close friends. Today from Vicky Roy to Anurag Sharma to Abul Kalam Azad to Gireesh GV, he finds his camera affiliations. 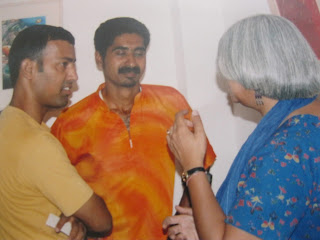 Let me come back to the occasion of the picture. I have two reasons to talk about this picture. First of all it was one of the worst times in my life. I had come back from London after spurning certain job offers extended by some galleries, in 2003 September. I thought the London and Goldsmiths tag would help me to establish my career as a curator. Nothing had happened then. The art scene was cold to me as ever. Jobless and hopeless, I was trying to find a foothold in the scene but in vain. Friends from the pre-London days remained friends even in the post-London days. Cutting edge and alternative practices were the catchy things that I was interested in then (exactly the same way today’s youngsters do). Collaborating with Mrinal I did a show called ‘Dreams: The Projects Unrealized’ in November 2003 at the Academy of Fine Arts and Literature (Arpana Caur’s gallery). The idea was to showcase the dreams of the artists in file folders and boxes. Nothing was on the walls or floor. Right in the middle of the gallery we placed a long table and twenty two file boxes. In each box there was a dream unrealized by an artist due to materialistic reasons. The viewers/audience were supposed to take out the content from the boxes as if they were searching for some vital information from an archive. The show was a hit, of course intellectually. As we were not expecting anything commercially, it was hit on that front too. One has to remember that many curators who vows by the name of cutting edge art and conceptual art, were doing ‘modern masters’ show then. 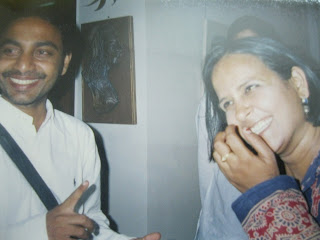 (Binoy Verghese and Mrinal Kulkarni at the opening)

The second point is about Ms.Krishna Chandan. She used to run her Krishna Gallery from Defence Colony. Now her gallery is in Lado Sarai. Then too she had a reputation as a commercial gallery. I was thinking that equipped with a post graduate degree in creative curating from Goldsmiths college, London that had produced artists like Damien Hirst, I had all the rights to be a part of the mainstream art scene in Delhi. I got the rude shock when most of the galleries did not even want to look at the artists whom I considered important then. While searching for opportunities, I met Krishna Chandan. She asked whether I could do a show for her. She told me that she was not a gallerist who could sell conceptual works. But she wanted to give me an opportunity. That was how the idea of curating ‘A Place in the Sun’ came by. Some friends who came to know about the show declared, Johny has gone commercial. In fact, I was ready to go commercial for the sake of my career and that of my friends. 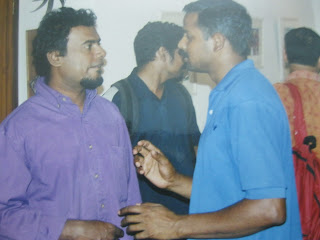 We wanted to work with the youngest and unacknowledged of the lot. Hence we lined up these artists: Natasha Preenja, Sunanda Khajuria, Sajeev Visweswaran, Binoy Verghese, Shijo Jacob, Ritu Kapoor and T.K.Hareendran. The exhibition showcased the small scale works of these artists. I don’t remember Krishna making any sales out of this show. But the show was well attended. Alice Cicolini, the cultural attaché of the British Council came along with her then deputy Chandrika Grover, who currently heads the Swiss Art Council in India. They came because I was a recent scholar of the Charles Wallace India Trust scholarship facilitated by the British Council. They must have come out of curiosity. Nothing happened in that direction though the London returned scholars and artists were several times invited to the British Council to do shows or give talks. I have no complaints. On the contrary I am thankful to them. Had they invited me to do things with them, I would have been one among the many. Today I stand on my own and I am quite happy about it. Mr.Kiderlen from German Embassy came because he was very close to T.K.Hareendran. It resulted into a great friendship with this German gentleman. He visited out Faridabad house where there was no furniture then. He sat on the floor, ate food with his fingers and left. Later he invited us to do a show at his Santiniketan residence in Delhi. We did a show called ‘The Twilight Zone of Great Indian Digital Divide’ in which along with T.K.Hareendran, artists like Jagannath Panda, Vibha Galhotra, Vinayak Bhattacharya and so on participated. The show was to highlight the digital divide of Indian artists; artists who were adept in doing technological art and those who wanted but for various reasons could not do it. Jagannath Panda’s first video installation was done for this show and Vibha Galhotra’s first interior installation. 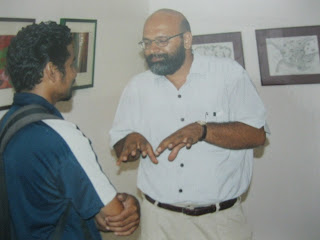 (Jenson Anto and Atul Bhalla at the opening)

But when you check the bio-data of most of these artists you don’t find these shows mentioned. They are afraid of acknowledging these shows done by us because this would show that once they were under privileged and were against the dominant system. Today they want to show themselves as coming from privileged backgrounds. They want to be conformists of the first class. When Princess Pea tells me about her new works I feel that Natasha Preenja was more real than the adopted identity of Princess Pea. Jagannath Panda was more sincere about his experimentations. But I am happy that all of them made their marks in the Indian art scene though they do not want to mention that their first show was with Mrinal and me. I wish them all good. But in this humdrum, we forget certain artists like T.K.Hareendran. May be I have enough materials to write about him for I had taken extensive interviews with him. I will write about him some other time.
Posted by JohnyML at 9:35 PM