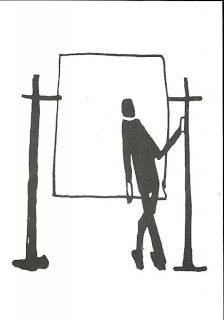 (A Drawing by Franz Kafka)


I wonder whether these days, people write diary entries. With so many channels to communicate with others, diary writing must have gone to those who are compulsively and chronically lonely. Diary writing was a practice for many, both public and private personalities, who wanted to register their deeds, dreams and desires for themselves as well as for the posterity. It was a sort of confession, a daring baring of mind and that must be the reason why many asked their diaries to be destroyed by the most faithful ones after their deaths. Dairies make some famous posthumously as in the case of Anne Franck. In the case of Franz Kafka, he had asked his trusted friend and confidante, Max Broad to destroy all his manuscripts after his death. In this one matter, Broad went against his friend and Kafka’s major works were published posthumously. May be Kafka knew well that asking a friend to destroy his manuscripts was a good reason to rouse enough curiosity that ensured publication and proliferation.

I used to be a diarist when I was a fifteen year old boy. I had gone through a year-long initiation into early manhood between 1983-1984. My father was bedridden for a year with a severe illness and I spent time in a hospital with him for almost a year, leaving my studies. I met people from different walks of life, saw many deaths and spent many a nights in streets outside the hospital. On 6th October 1984, my father died in the hospital. When relatives left after a few days of mourning I felt the days and nights empty. One night I took out a notebook and wrote a few lines addressing my dead father. For almost a year I recorded small little things happening to me as well as to others in the diary. I was speaking to my father. But then you cannot speak to your father forever, dead or alive. I gave the school final exams as a privately registered student and passed with good marks. College days brought new friends and new passions. Even if father was dead and gone, there were things that I was not ready to tell him. So I stopped addressing him in the diary entries. Instead, I started addressing those girls who I thought were in love with me. In fact I was imagining things. I was in love with them and they were only kind to me.

Conventional diary writing, as if you were addressing someone invisible or speaking to the diary itself, gave way to impersonalized registration of observations. Sometimes I felt like starting a novel. So instead of writing diary entries I wrote chapters. Sometimes, stories, poems and at other times, when literary ambitions were at its peak even attempted writing plays. I had heard that to become a good poet you should write plays too. To underline that argument there were the cases of Shakespeare and Kalidasa, both were playwrights and unparalleled poets. I had written some plays for the school theatre. But today when I think of it, even my dark cheeks go red out of shame. My friends and myself enacted those scripts in school festivals. Those plays were with a social message; in one of them I was an old man who refused quit smoking. All the tragic characters had tuberculosis and invariably they died on stage vomiting blood. Another theatrical device for effect was getting shot on stage. Spilling blood and death evoked a sense of tragedy and more than that stage craft. You placed inside your shirt an eggshell filled with red ink, carefully sealed with polythene and wax till you got shot by the police on stage (they were sharp shooters and always got you right in the chest). Once you receive the bullet on your chest (your backstage supporters are ready with a cracker detonated right on time; but often went off a few seconds before or after the inspector pulled the trigger), you crushed the eggshell and ‘blood’ gushed out of your wound. Tuberculosis was an easy way out; you could hide the blood surrogate somewhere in the stage and before your death you could grab it and while coughing you could fill your mouth with it and then cough it out. Once I died coughing blood but I was supposed to be lying dead on a cot, which was a wooden school bench with a weak leg. As I fell dead, my somewhat heavy body came with full force on it and the bench collapsed. Along with the bench the dead me fell on the floor; for a second I thought of lying there still. But the next moment saw myself getting up from death, straightening the bench and once again falling dead to the mirth of the audience. To cut a long story short, I could say that in that competition, the best actor award went to the one who died out of a bullet wound.

I don’t know when I stopped writing diaries altogether. It must be when I went to Baroda in 1992. I started writing letters to my mother from there and the nights were occupied with friends. I thought I had communicated enough through those weekly letters and the endless chats with friends. There was no need to write a diary. In Delhi, in 1995, I took it up again, but it had lost its momentum. I was writing continuously but they were not in the form of diary entries. After a long time, in June 2013, I once again took up writing diary, this time strictly in Malayalam. I thought I have something to tell myself which I don’t want someone who is immediately around me need to understand. But soon I realized that I didn’t have anything to keep or say in private, or if at all I had, they mostly were involved public in it as most of my works were connected to artists and the art scene. My private thoughts take the form of a public utterance and they appear in magazines, weeklies, journals, facebook status updates and all. Does anything left after that worthy enough to be registered? Even if I find something, can I keep them as private as possible? How much privacy I can have in my profession? Even if I can have physical loneliness can I be privy to enjoy solitude which is absolutely private? If I have solitude, should it be absolutely mine? Do I need to talk about those feelings that I have during the moments of solitude? Do I need to talk about the people whom I meet every day? Do their interactions with me need to be filtered to the public for wider contemplation? Are these meetings and events exceptional at all or are they mundane?

I think of writing a public diary. This is a preamble to it. I asked the abovementioned questions to myself several times. I got an answer to the last question which was quite convincing. People meet people every day. People talk to people, people share so many things with people. They communicate so vigorously through the modern communication systems. They are constantly in touch with people. But the more you make it so regular and explicit they may look very mundane. Over communication is something that drains meaning out of communications. Then it becomes an end in itself. I deem my communications with people are not mundane. No communication is made for the sake of communication. Over a period of time, I have cut down my phone calls to people, mandatory emailing, casual greetings, idle chats and friendly meetings. Today, I communicate only when it is needed and I should say, I communicate with people a lot that too even after considerably cutting down my time on that. I consider myself a public person with a private life and mind. And it is my responsibility to communicate with people. And I have got the responsibility to make every communication meaningful. A meaningful communication occurs when its subtexts are understood in the right sense. I believe that however private I want to be the subtexts that I derive from my daily communications with people should be registered for larger consumption and benefit.

Once, when I was actively blogging, a close friend of mine asked me whether it was necessary to say it all. I told him that even if I was giving an impression of saying it all a major portion of what I wanted to say still remained unsaid. An open diary could be a trap; it could show the depth as well as shallowness of the personality of the diarist. It could also make a person less mysterious. One could feel, ‘oh, he is only this much.’ But actively contemplating on this point for a long time I have come to a conclusion that the more you make yourself revealed to the public the more you become mysterious. I have been following the lives of famous personalities and celebrities. Even after reading their biographies and the daily trivia of their lives related colourfully by journalists, I get this feeling that they all remain more mysterious than ever. The trivia and serious data that I consume on a daily basis turn slowly into a layer mystery that adds to the charm of the personalities that I follow. Mahatma Gandhi is one example that fascinates me in this case. Hundreds of volumes have been written about him and same amount of volumes had been written by himself. I have made some efforts to read those and the more I read the more mysterious he become. I feel that I have seen only the tip of an iceberg.

Here, in this series, I am going to write an open diary, registering my daily views, opinion, observation and so on. I promise that I make all possible efforts to hide the identity of the people who come under discussion here when I think that revealing of their identities might damage their reputation or even if it does not, they willingly have not given me consent to be revealed. So, what you will read in the coming days, could possibly have the subtexts of communications with real people than the actual ones. I strongly believe that my views would help a lot of people in thrashing out problems that they face in their daily lives and careers. But I do not intend this series to be a self-help guide or a counsellor’s unsolicited advices. These diary entries are going to be strictly my own efforts to understand my life and career, and its relevance and irrelevance in today’s world. I am not a celebrity or very ‘successful’ professional as a writer, critic or a curator. Even these days I think of leaving my curatorial career behind and focus completely on writing. But that is a different thing to be deliberated at this moment. I welcome all of you (if you have read me till here) to my private world, which refuses to be public but coax it to be one. But I am privileged to know and understand that the more I reveal my private thoughts to you the more my solitude will be intensified.