My Public Diary 8: Child is the Father of a Writer 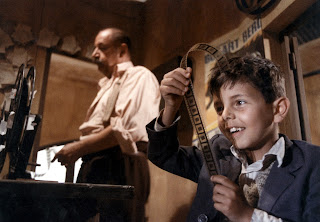 (A Still from the movie Cinema Paradiso)


My son has started watching Animal Planet and National Geographic. The progression seems to be interesting; from Japanese animations dubbed into Hindi and English to the sports channels and the channels that highlight the wonders of nature. Like other children of his age, he too lives in an imaginary world. While walking to the bus stop in the morning to catch his school bus suddenly he cups his hands catches something from air and triumphantly turns to me and raises his finger with a scream breaking out of his little mouth. He has just caught some famous bats man out who has pulled his willow up for a six. At times, at home, he falls down slowly, with labored movements on the floor and I recognize it as a slow motion replay of a very risky fielding. He has just saved his team from a four. Sometimes he asks me to close my eyes. Unsuspecting and loving, I close them and a sharp punch below my belt sends me into curls. He has just knocked down his opponent in a foul punch.

Of late, I have noticed him doing something more. He has graduated from being a cricketer to a predating animal. He watches some program that shows three different species of animals hunt for their prey; it is presented as a competition. Often, at home, I either sit glued to a book or the laptop, writing something or scrolling down the facebook page to watch the variety of interests that people display out there in the form of their postings. Suddenly some heavy form falls on me, completely unsettling me from my poise and it bites deep into my calves or biceps for some time. With some relish it removes or imagines remove a chunk of flesh from my body and gallops away from there. That is my son, who has just turned into a leopard or a tiger. He has just pounced on his prey, a deer or a bison or even a frightened rabbit. I look at him as I regain my posture clutching precariously on my computer that is literally on my lap. I see him, the fierce predatory animal walking away all on his four, making some grumbling noises of satisfaction. Now I am very careful when I sit to read or write. From the sides of my eyes, I watch out for a head slowly rising from the side of the bed or from behind the cupboard or door.

Bill Waterson, who created the famous cartoon strip (even in a graphic novel form), Calvin and Hobbes, is absolutely right. Kids behave really funny and their world of imagination is so immense that even the best writer in the world cannot match up with that. Kids are wonderful creatures. When I was reading and later on translating the famous Nigerian writer Ben Okri’s landmark novel, Famished Road, I had felt the power of childhood imaginations. Azaro, the spirit child, who is protagonist of the novel, sees the worlds that an ordinary human being cannot even visualize. I was astonished when my daughter asked a question, ‘Papa, do butterflies wear clothes?’ I mulled over the question again and again; a question as colorful and as innocent as the butterflies themselves. I thought of answering the question initially. Then left it there itself. Had I tried to give an answer to it the beauty of the question would have vanished. Some questions do not have an answer; the beauty lies in the question itself.

I remember a very beautiful and sensitive poem written by Kumaran Asan, one of the triumvirates of modern Malayalam poetry. A child after seeing the butterflies flying off from the flowers, asks his mother, why these flowers are flying away from the plant. Also the child expresses his inability to fly with them as he does not have wings like them. Then mother tells the child, dear child, you are mistaken. They are not flowers but butterflies. Then mother adds that he should not feel bad about things which he is not able to do. As a final consolation she tells the child that we know very little in the world as the world itself is a dream dreamt by God. Children, like that are great repositories of questions that generally do not demand answers but make the grown up world re-think about its deeds. As the child grows up he loses his capacity to imagine as he gets into the systemic notions of imaginations where control gets an upper hand than the liberated sense of dreaming and imagining.

Haven’t you seen the pangs of that child who wishes for the absence of his teacher as he is filled with hopes by the pouring rain? And how much gets disappointed when he sees the glimpse of a wet umbrella at the other end of the alley! Don’t you remember what the little Oscar sees as he comes out of his mother’s womb? A forty watt bulb that represents the semi-truths of a Nazi world. Isn’t it a pleasure to see the world through the eyes of Apu who walks behind the sweet vendor or runs across the steppe with his sister to see the chugging steam engine? How interesting it is to see the world through the films as young Tornatore remembers his childhood in Cinema Paradiso? What about that child who runs a race to win the second prize because the second prize would give him a pair of little shoes that he would like to give his young sister? Children send our eyes moisten, with pain and pleasure. They are mischief makers too who just don’t want a pair of lovers to have their private heaven as in Truffaut’s Mischief Makers. Sometimes, parents want to kill their children because they could make the lives of parents a burning hell. But we don’t kill our own kids. Kumaran Asan wrote in his famous poem, ‘The Delivery of a Lioness’ (Oru Simha Prasavam), No animal feel hatred for its own offspring even if the animal is so ferocious and cruel, like a lioness.

My idea was not to write about kids and their activities. I wanted to write about how words come to a writer or to be precise, how a writer launches himself to writing an idea that he has been mulling over for quite some time. In fact I have been wishing to write about this topic since my son started behaving like a predating animals and hunting me down when I was absolutely unaware of his presence in my vicinity. The more I watched him making his silent and stealthy moves, using his palms and soles as soft paws, the more I realized that a writer too was like a predating animal. He moves around his idea for a long time; like a sort of big newt of the size of a cat biting a huge bison and wait for weeks to gangrene set in to kill the big animal. He waits and at the opportune moment he pounces on his idea and shreds it into words. A writer, when he finishes a particular piece of writing looks like an animal that has just cleaned up the last piece of flesh from the bone and smacks in lips with sense of relish, celebration and inexplicable satisfaction. A writer is a like a kingfisher who meditates for a long time to swoop down to pick his fish. Sometimes he is like happy white polar bear that plays amongst a host of fish and catches very little. A writer is like a tiger, a lion but never a hyena. A writer is an arrow a trained pair of fingers, an able arm, a sharp eye and a calculating mind shoot. He is the target too.
Posted by JohnyML at 3:35 PM