Performative Symbolism of Arvind Kejriwal and its own Traps 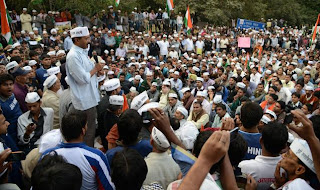 
Somehow I have not seen anybody making a direct reference to George Orwell’s ‘Animal Farm’ vis-à-vis the present political experiment in Delhi. With tactical support of the Congress Party from outside the Aam Aadmi Party has finally reached the seat of power. Chief Minister, Arvind Kejriwal on whose image the party has garnered votes proves himself to the best demagogue around, perhaps a notch ahead than his national rival, Narendra Modi. The performative symbolism of both these leaders does not fail to catch our attention. While Modi, in the assembly elections in Gujarat had employed virtual 3D imaging for his political campaigning where he could simultaneously address political rallies held different parts of the state using high tech gadgets, Arvind Kejrival uses his physical presence to address people. Both are convincing in their performances, despite the journalistic as well as political skepticism. But what Modi considers as virtual demography, by making himself a virtual image, Kejrival deems his population as a real entity. Modi could be seen and Kejriwal could be felt. The ocular and tactile qualities of these two leaders efficiently move people to these leaders’ desired effects.

Let me come back to Animal Farm. In this political fable, a group of animals capture power from a ranch owner through a coupe. The animals who have now become the leaders spell out rules that are to be observed by all the other animals during the regime. The first rule is: Four legged are right and two legged are wrong. Gradually, the subjects see the animals in the top rung of the political order walking on two legs, and at the dinner table even using forks and knives. When questioned, the leadership sends out a circular which reads: All animals are equal but some are more equal than others. Aam Aadmi Party leadership abjures all that comes with power; red beacons, bungalows and police security cover. But the inevitable has already been in the offing. Kejriwal has to move to a five room guest house near the Delhi Secretariat. He would be given security cover by plain clothed sleuths from the UP and Delhi Police. So many former political leaders have already begun queuing up to become Aam Aadmi Party members. That means, they bring the prevalent political culture into the party, if they are admitted. All animals are equal but some are more equal than others.

I am not an Arvind detractor. But I want to be one among those many who would like to be his conscience. He has asked ten days for implementing his political promises handed out to the people during the election campaign. Feasibility studies are on. Many heads have already rolled. Many seats have been shuffled and replaced. The inevitability of governance, implementation of power from up to down, is waiting in the wings for its cue. However, I do not want to see Arvind to become another politician or animal who has become more equal than others. Had he been sitting at the opposition benches, he would have been more belligerent. Now his voice has calmed down. Now he wants patience and tolerance from people. For him, it is like waking up from a beautiful dream and sees it is right there in reality. Now he has to face it and handle it. Dreams are good so long as they remain dreams. The moment they become real, they lose their dreamy charm. That’s why many skeptics have a problem with Arvind. They think that he is too idealistic. I do not find there is a problem with his idealism. The problem lies in the ways in which he tries to employ it.

First of all, Arvind made the swearing in ceremony a public affair. Theoretically speaking, it was a creation of a spectacle. In a spectacle, the apparent loses its meaning and its place is taken over by the relationships created between the many apparents. Hence, what we have seen in Arvind’s swearing in ceremony is a chain of relationships; between people, images, caps, slogans, speeches and the exhaustive number of people and their aspirations. What is lost in this spectacle is the meaning of governance/government as a reality. The danger is, when the relationship between these apparent images collapses, the reality that caused the relationship between them also would crumble under the weight of disillusionment. In a democracy, it is always good to assure the participation of the people who have elected their members or even those who have voted against them. That is the true spirit of democracy. And it happens through decentralization of power. In the former communist states like in Kerala, this decentralization had been effectively done. Arvind too wishes to have a sort of decentralization of power in place. But the problem is in every decentralized zone, it is Arvind who is the leader.

Before I come to the multiplication of Arvind into many in mohallas and pachayat’s let me deal with the idea of opening up of the doors of Delhi secretariat to the public. It used to be a fortress during the previous regimes, guarded well by policemen, politicians, leaders, sycophants and bureaucrats, and above all by arrogance and lethargy. Today, Arvind opens up the secretariat for people. I am not a supporter of a well-fortified government office. But opening up of the gates does not help either. There will be a stream of people coming in with their petitions from remotes parts of Delhi to seek an audience with Arvind. They could show even their ration cards to get an entry. It would be humanly impossible to handle such a flooding of complaints and grievances. The natural outcome will be mild controlling. Slowly police people will appear. They will control the inflow of people. Appointments will take place. Middlemen will appear. Sleazy ways of getting entry would start. That would be actually going against the very principles of Arvind. It is not that we do not have a system to check bribing. But the people who are in despair do not mind even shelling out some money to get their things done, whether it is by Arvind or Shiela.

Does the opening up of doors of Delhi secretariat help then? No. Instead, it would create commotions and even things ending up lathi charge and tear gassing. Today people from Valmiki community ask for permanency of their jobs in the Delhi Transport Corporation. When they come to secretariat they will not come alone. They will come in groups, the way the Jats had come from Haryana, Chandigarh and Punjab during Shiela’s time. The auto drivers will come to the secretariat. For effect they will bring their own badsha, Rajnikant. Or even they consider today Arvind as their Rajnikant. Then Rajnikant has other responsibilities. Similar would be the case of any community, caste and class. It would lead to anarchy. Good governance is one thing but anarchic governance style is another. Good can turn ugly within moments in that situation.

Arvind takes a leaf from Gandhiji’s history. Gandhiji had traveled around, met people, talked to them, whenever he got irritated he left food and resorted to fasting. But Gandhiji lived in a time when there were no ipads and apps. People had enough time and no jobs. Today people do not have time and they have a lot to do. Secretariat Tourism or Mohalla visiting Tourism could be another result of these activities. Arvind cannot address all the sections of Delhi in person. Or if he thinks that, like in Athens on 4th Century BC everyone could participate in democratic process, I have to tell him that times have changed. Such kind of limited populace and class divisions in the society could have afforded that sort of democracy. But today, the society is a diversified organism. The society elects representatives to handle their problems. Going back to them for each and every problem does not show maturity of democracy or the politician who employs that method. One cannot invite everyone into policy making and implementation. Hierarchies are bound to take place. But how you handle these hierarchies, make them accountable and transparent, that is what all matters. So Arvind, please desist from this populism or slowly give performative indications that you are here to change the system, not to entertain the mohallas and panchayats. Make everyone accountable, that is what you are expected to do.

One more thing, I want to bring to Arvind’s notice. Before the elections, I had seen Arvind praying in a Gurudwara. At various times, he has been seen/shown at various shrines. Today’s newspaper shows a picture of his parents doing a havan (ceremonial sacrifice) for the health of their son. Let them do the havan. But Arvind going to the temples and religious sites is a wrong thing. This is what exactly done by Jawaharlal Nehur, Indira Gandhi, Rajiv Gandhi and many other prime ministers, perhaps with one exception of V.P.Singh. Tomorrow, to appease the Muslims you will go to mosque, to appease the Christians you will go to church. Next day to a gurudwara. Then to a Ram temple. Then to Malai Mandir. Your focus will shift from policy to vote. Arvind will fall into the same gutter of religion. We don’t want a god fearing and temple trotting Chief Minister in Arvind. We need an Arvind who is secular and anti-corruption activist. I do not ask Arvind to become an atheist. But I would request him not to flaunt his religious sentiments in public. Kumar Biswas, one of the AAP leaders asked Narendra Modi to contest from Amethi, the sure seat of Rahul Gandhi in UP. But, how many Harijan temples, AAP leaders cared to visit, especially the broom holding working class comes from these bastis?

Aam Aadmi Party should not show its own weakness. One understands that it is very difficult to become different from the political ethos of a country, which has been shaped over ages. But the change should happen here and now. A secular Delhi, as metro has proved, does not run on Hanumans, Rams, Jesuses and Allahs and Gurus. It is run by people. And we have s/elected you and sent you there to govern; not to show your allegiance to religion; we have more than enough priests and god men to do that eye fooling magic. You are here to handle our problems. You are here to change the political climate of the state. You are here to establish an accountable, transparent, fearless and uncorrupt society. If you are thinking about Gandhiji, let me tell you, the man who had walked and preached around the world holding an imaginary Gita in his hand, was never seen standing or paying tributes to any temple of whatever complexion.
Posted by JohnyML at 4:33 PM

Well written. I was contemplating that myself. After all, all revolutions have started with the common man in mind, but ended up with exclusivity for those that remained in power. Power is not a means for improving anything. Power is a self-fullfilling end.