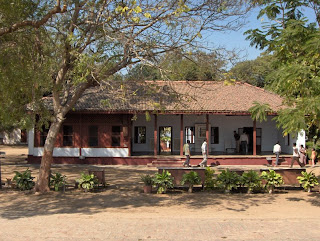 
Once again I am at Sabarmati Ashram. I try not to make this visit a ritual whenever I am in Ahmedabad because I fear that for me at least, the visit could be a symbolic gesture and any kind of symbolism could lead to a ritual and rituals could become blind repetitions of certain acts devoid of its original intention or meaning. Still, every day when I travel from Paldi to Gandhinagar, as I cross Sabarmati Ashram a part of me goes out there, and it stays there till I retrieve it forcefully or let my complete self to go and join the broken part, sitting there lost. I have started liking the word lost. Gandhiji said, my life is my message. U.G.Krishnamurthy, a radical philosopher said, do not follow me, I am lost. Both philosophers seem to be pragmatic in their views. Gandhiji is at his persuasive best and Krishnamurthy in his negative best. But both of them gain their own followers, ages after ages. Addiction of being lost or led is quite strong.

I do not want to be addicted to anything. If at all there is an addiction, it is to reading, writing, listening to the stories of people and above all being alone. When you read you are alone, when you write you are alone, when you listen to the stories of people you are alone and when you are alone, you are not alone. The whole world is with you, the universe, the cosmos and you become a part of all these. Complete merger is not possible though people speak about it. The moment you speak about complete merger with cosmos, you are already separated from it. That’s why learned people say that only you can say how that merger happened but you can never say what that merger is. It is a break down and a flight. A breakdown and flight cannot happen simultaneously to the same entity. But in the merger it happens. But still it is an explanation, an answer to a how, not an answer to what. I get the answers to what from Sabarmati. I am attracted to Sabarmati only because of that.

But I find, Sabarmati too has become a ritual to which I am a distant part. I see people, right in the middle of the day, pouring in as if it were a pilgrimage that they have undertaken, walk around the campus, speak in hushed up words, take photographs and go back to the world of materialistic worries and in pursuit of worldly pleasures. I observe the ritual conducted by different people from different walks of life. They come from all over India; all over the world. The moment they walk in, they feel the difference. You are entering in history, a space frozen in time, a make believe world, an island of disbelief and a magical land where past is present and present is not even future. The layout of the campus is in a reverse order. Before the historical site, you hit the memory museum and the souvenir and literature shop. So after a pictorial journey through Gandhiji’s life, you end up in buying souvenirs and books. You carry your purchase when you reach Gandhiji’s original ashram.

Sitting on a raised platform that lay across the small dual hut meant for Mira and Vinoba, I see people coming to the original Ashram. They remove their footwear outside, go inside, stand near the Charkha teacher, further walk into the rooms, kitchen and inner courtyard, stare at nothingness, feel some vague feeling about history, compare it with Attenborough’s Gandhi if they have seen the movie, come out, peep into Gandhiji’s study room as if it were a cage. People click at past and try to make it present. I am sure they don’t. Then they walk around the house, clockwise direction, come back to the front once again, some people fold their hands out of habit. I am afraid, one day, someone dressed up like Gandhiji would come out and give some flowers and sandal paste to the devotees. I am worried of a future when there would be three-time puja and aarti for Gandhiji. But I am solaced by the thought that there would be still Gandhians at Sabarmati who would not let it become a ritual. Rituals cause institutionalisation and vice versa. Though Gandhiji has already become an institution, he has resisted throughout the process of turning himself into a rituals. Gandhians have tried the Gandhian rituals only to prove themselves to be the poor and laughable caricatures of Gandhiji himself. That’s why when contemporary leaders wear anything that remotely reminds people of post-Gandhiji Gandhian rituals, the gradual corrosion that has been taking place since his death in the values systems that have come to be known as Gandhian principles, I feel like telling them to keep off from such kind of rituals.

Behind the Ashram, in a diagonal from where I sit, under the cool shadow of a big tree, a group of children play some games in absolute abandon. From their clothes I understand that they hail from lower middle class families. They must be on a school trip as they have a young male teacher to lead them in their games and give them sufficient instructions, besides to control them with sharp chiding if it is needed. The game in progress is the blind man’s bluff. Initially a girl is blind folded and is sent in search of her companions. Each faltering step sends the other children into throes of laughter and reasonless absolute glee, often almost collapsing the otherwise calm and serene atmosphere of the ashram. But the noises that the children make do not sound too crass or disturbing. The next turn goes to a boy. He is blind folded. He is more adventurous and daring; the more he dares and become adventurous the more he goes away from the pack, walking with hands stretched out to dark nothingness, while other kids follow him in mock trailing with their giggles and foaming and overflowing mirth.

Looking at the game, I think of Sabarmati ashram in particular and the whole of our socio-political life in general. It is a blind man’s bluff game. We are all led by the acts of blind men or blind folded men. Blind men are super sensitive but blind folded men are not. They affect sensitivity and express it with expanded gestures. They move towards sounds and movements; they move towards power and money. The pack, all of us are also in a sense happy to follow this dumb game. We follow the blind folded men in absolute happiness. We can see, we are not blind folded. We can walk off from this game. But still we follow this man/men till they catch us or they fall down. I find the metaphor of this game so meaningful and adequate. I see the ritual people enact there in front of the ashram. They too are blind folded by the society. They are not seeing any of Gandhiji’s principles. They just come to this place, they feel good about it. They will go back and boast that they have been to Gandhiji’s ashram. Except for souvenirs, I do not think they take something from here. Buying of books, peering into the rooms where once Gandhiji and his people lived and hanging out there and taking photographs seem to have become a ritual in itself. They are registered only to be trashed the moment of departure.

Sabarmati Ashram today is a place that could collapse into a ritualistic space with elaborate actions of devotion at anytime. The river, Sabarmati has already been institutionalized. It has been straight-jacketed within the developmental agenda of river front tourism. Today we have a riverfront with spots for relaxation and revelry. But where has the river gone? The river has become a slimy streak of water that still glistens and beams with happiness at the touch of the sun rays as if it were a bride inside a refugee camp. In the direst of occasion also she blushes by the arrival of her groom. The cemented, concreted and regimented shores of the river give a contrasting picture to what the riverfront once had been. It is no longer a river, it is no longer a flow, it is no longer a life, it is no longer a history, it is a present, an wound from the past still festering with memories. The sight pains me. People are happy to climb up the boundary wall of the ashram that separates the ashram compound from the riverfront. They click pictures against the grey haziness that silhouettes industrial plants across the river. The sunlight from the west falls behind most of the photographic subjects. I am sure they all will get a dark silhouette of human being from that angle in that afternoon.

Gandhiji walks up to me. He smiles at me. He asks why I came again. I do not have an answer. Everything around here has changed. And change is a must. But ashram has not changed for good. Any change would make it another pilgrimage centre that doubles up as a touristic destination. Sabarmati and tourism do not gel. A forced collation could be as ironic as giving a machine gun to Gandhiji’s hand instead of a long walking stick. I walk back and go to the book stall. The Story of My Experiments with Truth has been published in most of regional languages. The stack of those copies makes me happy. Gandhiji is still a reader’s pleasure. Gandhiji, if he fails to give further political leads in a changed scenario, I believe he would remain to excite literary exponents. May be, he would be condemned as a doomsday philosopher one day, who knows. Still I would love this man because he was a man of contradictions and was the lost sheep and the shepherd who went behind the lost one. He has not turned back in his search. But we have, indeed. But it is a pleasure to follow a lost man because he could throw up a lot of surprises.