Sleeping Bride in the Airplane 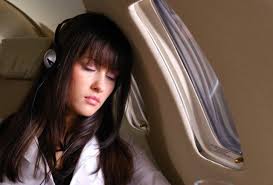 (picture for illustrative purpose only)


Whenever I travel by flight I look for that enigmatic woman who had once enthralled Gabriel Garcia Marquez on his flight from Charles De Gaul Airport in France to New York City. In his collection of short stories titled ‘Strange Pilgrims’, he recounts this story of an enigmatic woman under the title, ‘Sleeping Beauty and the Airplane’. Marquez had seen her at the airport lounge, an extremely beautiful woman with an ‘oriental sadness’ on her face. He becomes inquisitive but she moves away. Inside the flight just before the announcement regarding the completion of boarding, to his surprise, this woman walks in and settles down in the seat next to him. She calls the airhostess, tells her that she does not expect any food or snacks, and goes on to sleep. After eight hours of travel, she wakes up, just touches up her face with some minimum make up and walks out of the plane leaving Marquez to wonder about her identity. The whole tension of not knowing a person who has caught his attention makes the whole magical story of Marquez. May be we all get to see such people, male or female, somewhat enigmatic, but we leave them behind without giving much attention after certain point. Marquez’ success lies in his persistence to know her but his inability to ask her anything.

Recently, when I was flying from Delhi to Trivandrum, unlike on other occasions, I got a middle seat. I hate middle seat because I am afraid of being caught between two strangers. I do not like fat people sitting next to me on either side. I get claustrophobic whether they are males or females. If they are women, I am all the more worried because any accidental move of your hand or leg could invite unnecessary looks of hatred or suspicion from them. So I prefer aisle seats and often I make it a point I get it. But this time it was a pre-booked seat and the flight was full to its capacity. The boarding attendant expressed his inability to accommodate me on an aisle seat and he apologized to me for not providing one. It was an unusual gesture but by that time I had made up my mind to sit between two strangers. My only prayer was that my fellow passengers on my either should be lean and thin, humane, accommodative and not arrogant. Inside the flight, I found the man at the window seat was an elder Malayali man who was constantly checking the menu in the in-flight magazine and comparing prizes. Before the closing door announcement, a young woman came and sat next to me at the aisle seat.

My head was reeling with a bad cold and though I had a book with me I did not have any intention to read it. Before the flight took off, from the young woman’s telephonic conversations I could make out that she was also a Malayali and was carrying excess baggage which she had got accommodated with a Malayali staff woman in the airline company. I was too sleepy but I was afraid that my hand would touch this young girl while sleeping. So I leaned more towards the window side where the elder Malayali was still sitting and wondering at the exorbitant prices of the in-flight food. Before the flight took off, I was already in deep sleep. Sometime, halfway I got up and found myself amongst a host of sleeping people around me. The man was sleeping, the young woman was sleeping, a large jawed young white girl across the aisle was also sleeping. I found her sleeping interesting because she was carrying a large volume of Ramachandra Guha’s ‘India After Gandhi’. From the parting of the book I could make out that she had read the book half way through and still she was trying to read fighting her sleep. Finally she succumbed to the sleep. With sleep penetrating her mind deeper and deeper, I found her lips slowly parting, neck falling back, head tilting and falling to one side. It is so pathetic to see people in different depths of sleep. This young woman’s mouth was opening in a very sad way, which I did not want to look at for a long time. I craned my neck and looked behind and looked ahead of me, and I found most of the people sleeping as if there was no tomorrow.

The girl sitting next to me was also sleeping. After the halt, when it took off from Mumbai and started flying further down south towards Trivandrum, once again people fell asleep. I was oscillating between sleep and wakefulness. Suddenly the pilot announced that there was some turbulence in the air and we were supposed wear our seat belt. It was said earlier that the pilot was a Mexican and I found it quite a coincidence that I was thinking of a Latin American writer, Marquez and the flight was commanded by a Mexican. I woke up and looked out of the window from a distance. The bright light outside was now gone faint and dark cloud like formations began to appear. From my right side, from the far off window a faint light was filtering in and it fell directly on the side of the girl who was sitting next to me. Her face appeared to me as a silhouette and I could see very minute hairs coming out of the contours of the silhouette. She was fast asleep. Her lips were quivering but it was not opening the way it was happening to the foreign girl. That means, I thought, she was not in deep sleep. She might have been dreaming something. What it could be? Let me tell you, I am not Marquez. So I could not think much and I left her there to her sleep or day dreaming.

The flight landed in Trivandrum. I got up and she too got up from her seat. Surprisingly, she gave me a smile. I smiled at her. She asked me whether I was going to Trivandrum or elsewhere? I said I had come here for some work but I belonged to the city. After a few seconds I asked her where she was heading to? She told me that she belonged to central Kerala and someone would come to pick her up. Then she went on talking to me for a while, which surprised me a bit. She said that she was working in a luxury hospital in Delhi as a nurse and for the last three years she was living Delhi. This time she was here for her marriage. She was going to get married after ten days and her bridegroom was living in a Gulf country. She even told me that there would be an engagement ceremony exactly two days before the marriage. She said that the betrothal would take place at her home and the marriage would take place in a church near the groom’s house a few kilometres away from her home. I asked her whether someone would come to fetch her. She said her father would come and as she was not comfortable travelling by road as she was prone to bouts of nausea, she preferred to travel by train. Then she told me that after her marriage, she would go back to Delhi next month and perhaps, once she gets a job in the gulf countries, she would join her husband there. It was time to move out.

I did not say good bye to her as I was following the queue before me. She did not say bye either to me. At the baggage collecting belt I found her standing at the other corner. Now I was more worried about reaching home myself. The thunder clouds had already darkened the sky and it was about to rain. In the car, on the way to home, I just thought of her. Why did she tell me about her life? I was an absolute stranger. May be she was absolutely happy and she wanted to tell someone about her marriage. I smiled to myself because I had forgotten her face by then. But why I wondered why I did not ask her name? She did not ask my name either. She was just happy. May be I too did not want to know her name.
Posted by JohnyML at 11:30 AM