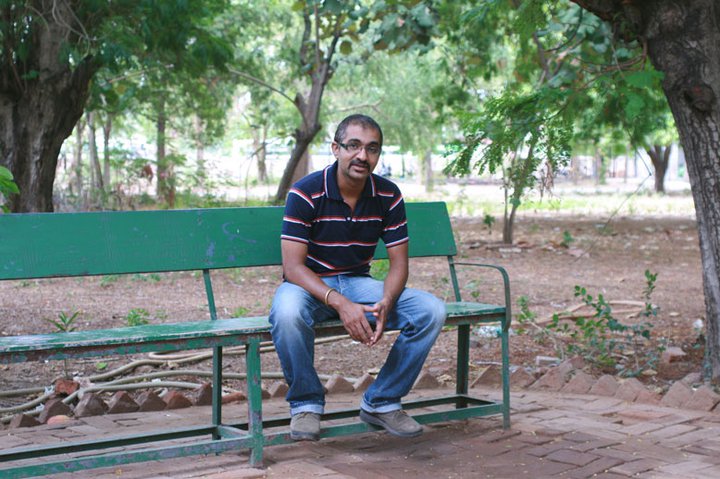 
The interior of Gallery Maskara in Mumbai reminds of an old chapel in a war torn territory where rustic old parents come to pray for their sons who had gone to the warfront ages back, perhaps never to return. Kindled by faith they oscillate between hope and despair. This is a hangover of having seen too many Tarkovsky movies when mind was fresh and not overtly corrupted by theories and ways of seeing. There in the gallery I too oscillate between hope and despair as I watch the sculptural installation of Mansoor Ali, who has been obsessed with the idea of ‘chair’ for a long time. As I know the artist, I understand, while doing these works he too moves like a pendulum between hope and despair. The gallery director, Abhay Maskara, who has written a small introductory note, posits Mansoor’s works strictly in the context of politics, power games, corruption and the human beings’ greed for holding on to the chairs, the positions of power. May be, that is an entry point, one of the many doors to get into the skin of those works, and that entry point should not be wrong either. However, these works of Mansoor evoke a series of images and thoughts in my mind and I would like to jot them down. And let me tell you my dear reader, it is not a critique, nor is it a note of appreciation. It is a silent prayer in which, though people would like to focus on one thing, as desperate as they are, they tend to wander into various ruminations, tragic and comic. 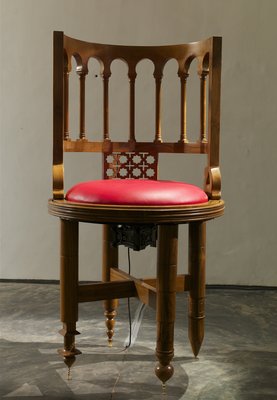 Mansoor’s chairs raise the fundamental aesthetical values flagged out by Plato and also in due course they pose this perennial and disturbing question of originality. A chair is not a chair but an object three times away from the ideal conception of it. According to the ancient philosopher, in his Platonic view, the original chair is there in the custody/imagination of god. And then comes the imagination of the crafts person and the final chair is the outcome of these two imaginations, a physical object. Therefore, the chair that we see today around us is an aesthetical interpretation of these two imaginations, perhaps not the representation of the original idea of the chair. Joseph Kosuth was perhaps arguing this case, but more in a desconstructionist verve, when he placed a chair at the gallery and pasted a dictionary definition of it on the wall. It was as good as ‘This is not a Pipe’ by Rene Magritte. But as I stand in front of Mansoor’s works, I feel obviously that the artistic intention is not to raise the already raised questions of structural linguistics and the deconstructionist clamours that followed it. But I see Mansoor’s chairs as a tragic-comic vivification of the world hierarchies that either seeps down or vapours up to the various layers of society, vying each other to replicate each other and find satisfaction in such replications. 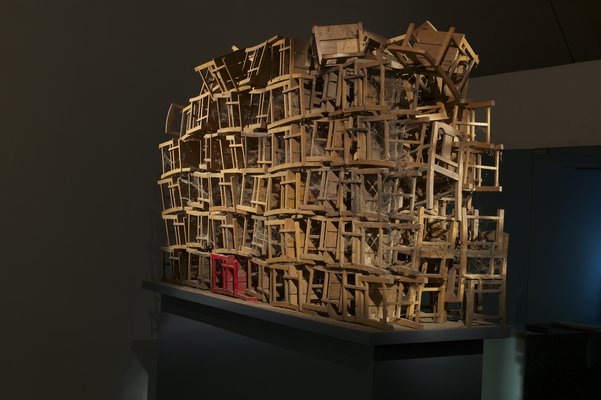 Four chairs come to my mind: The prime ministerial chair that the noted cartoonist R.K.Laxman had drawn repeatedly in his pocket cartoons. Jawaharlal Nehru was the first victim of that chair and the saga continues till in the case of Narendra Modi. But what amused me amongst them was a large chair where a small Lal Bahadur Shastri sitting with his legs dangling in mid air. R.K.Laxman was either obliquely referring  to Shastri’s small physique. Or was it was an ironic understatement that Shastri was not big enough to occupy a chair that Pandit Nehru had occupied. Chair, when seen in the political context is not just a chair but it is a musical chair, it is an electric chair and above all it is a machinery of repression and oppression. The second chair that comes to my mind is also from the same time, where Chittoprasad Bhattacharya, the Communist artist, had cartooned a chair; this chair has two occupants at a time, the kings of post independence India and the common man. Both of them want to occupy it and they are on an uneven scoot fight. And today we know who has won. The third chair is none other than the chair of the Imperial power in India, the peacock throne. And the fourth chair is the chair in Kiss Kursi Ka, a novel written by Amrit Nahata, which later on became a satirical movie on Indian politics. 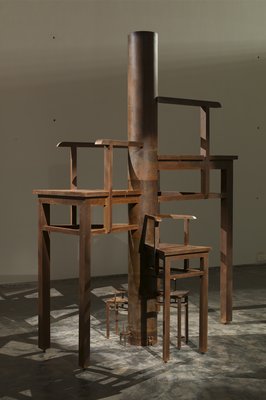 Mansoor Ali’s chairs perhaps comprise all of these chairs. As visual objects or sculptural installations these chairs evoke a visual impact. But I am afraid whether they have become too illustrative as the direct connotations of politics come naturally to these works. I feel it as a curse of the contemporary artists; the more they are inclined to comment upon the existing socio-political climate the more they get entangled in the meanings cleverly planted by the very same climate and its productive agencies. It has been happening with many an artist not only in our country but also elsewhere. Where the singular and monumental objects fail the artists tend to repeat the same image in the same ensemble several times or repeat it many times as components of a whole exhibition. The solace lies in the fact that Mansoor does not attempt to create familiar structures with the familiar chairs as that has been the norm for many contemporary artists these days. Some make trees, buildings and even skulls using steel utensils and some others make vehicles out of bone pieces. In both the cases these components are used as alphabets to create a visual statement but in the case of Mansoor’s ensemble of works, they are not alphabets but visual images that evoke multiple reactions but tied to the political critique. 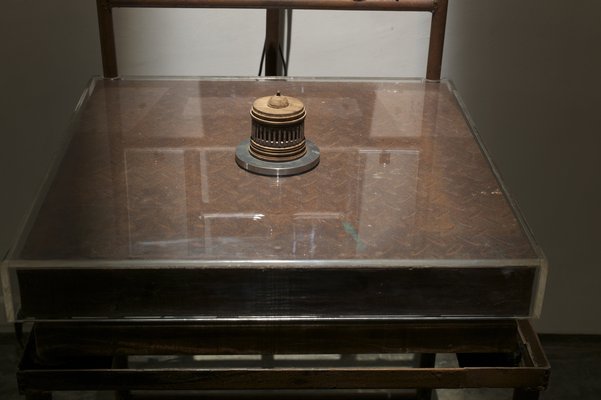 ‘The Restless Chair’ rotates and it rotates faster when the viewer approaches it, and it has all the visual characteristics of an authoritarian structure, in this case Indian parliament. In another work, Mansoor employs the same parliament structure and the work is titled the ‘Weight of the Political Brain’. It is a weighing machine, an industrial scale, and the weight of the brain here is equated as the weight of the parliament building, which in this case weighs around 1.33 kilograms. In another work titled Monument to an Unknown Politician, he uses around seven chairs of different sizes (the smallest one is three inches in size) in rusting iron/steel, and implies that to reach the top one has to start climbing from the smallest one. But I tend to call it a wishful work as in today’s Indian politics, where dynasty is rampant, small chair has lost its value altogether. To sit on the biggest chair you need to take birth in the right womb at the right political palace and also at the right time. Exceptions are there but they will be rendered useless within 49 days after staging a dharna at the parliament street, in peak winter. The best work in this exhibition is ‘Anatomy of an Unknown Chair’ which adequately deconstructs a rocking chair and displays its components in a glass case exactly the way objects are displayed in an ill maintained Indian museum. How an inconspicuous chair starts resembling ancient weapons and guns when it is deconstructed! It is a very interesting work indeed. The title is loaded as it reminds one of the India critique written none other than the first Indo-Anglican writer, Nirad C.Chowdhury who perhaps gave birth to the literary genre later flourished by V.S.Naipaul and Salman Rushdie, especially in their India baiting. 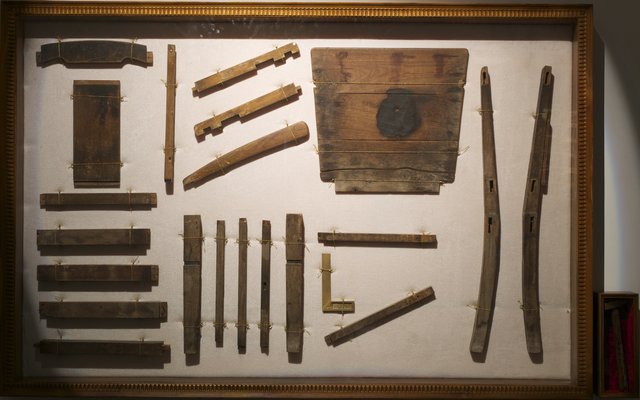 This show of Mansoor sticks out because of ‘Anatomy of an Unknown Chair’. The other work that receives the viewer at the invisible threshold of the gallery is titled Beautifully Corrupt II. This is an architectural structure made out of small dysfunctional chairs and they are filled with cobwebs. Does it resemble a government office that has left its mission of public service behind and has gone into an eternal lull? Or is it a contrast between the defunct public sector and the optimistic corporate sector? Or is it a statement saying that the chairs do not matter anymore? Mansoor's show evokes too many questions in a thinking person’s mind. For the rest of the wine drinkers, it is ‘an Abhay Maskara presentation.’
Posted by JohnyML at 9:59 AM

very interesting observation and loved the end not ;)