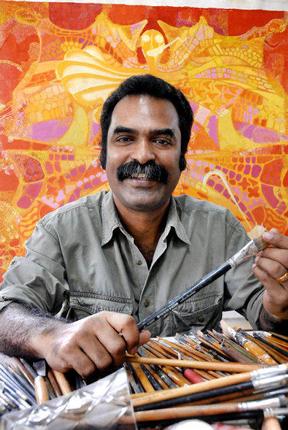 
Before a work of art, an enthusiastic viewer, though he claims to be looking for something new and strange, in fact often looks for something familiar. Looking for familiarity is the mind’s very deliberate attempt to derive associations that would evoke a sense of coherence and comprehension, which would eventually lead to the understanding of a work of art. Familiarity also sends the viewer to a comfort zone so that he could be at peace with what he witnesses. It reassures the patterns within which one has set to lead his life, makes negotiations with the society where he lives and also makes him feel secure in front of someone else’s aesthetic expression. A work of art could be disturbing at the outset, it may have some shock values and it may even challenge the very notions about art that one holds sacred for a long time. However, the moment one finds some kind of familiarity with the subject/image/style one is satisfied. Dejection and rejection turn into acceptance. If you are a buyer or an art collector, perhaps then you could look for a cheque leaf to sign and own it. Then you say, “I want to leave with this work of art.” An art collection basically shows the collector’s taste, true, but it also shows how much he wants to familiarize with the strange beauties and be at peace with them. 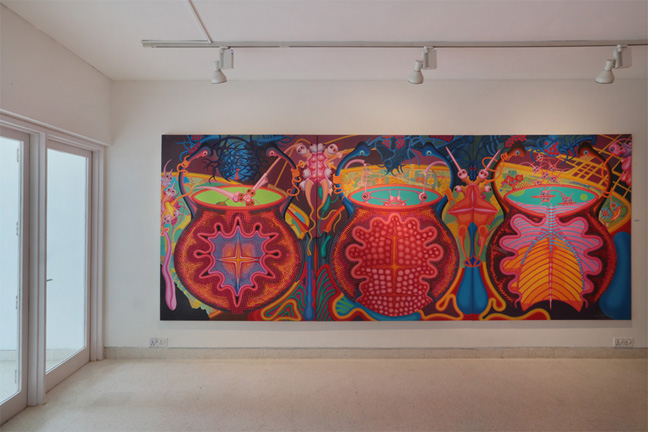 Pradeep Puthoor’s paintings, despite its riot of colours, at the outset do not take the viewers to a comfort zone of familiarity. They are large scale paintings with organic images and bone structures filling in the space defying possible logic of symmetry and structure. However, they do not collapse under their own weight as the more one looks at them the more one sees the structural integrity and the compositional strength. But that is not enough for a viewer to feel comforted or reassured in front of a work of art. The search for familiarity should start from somewhere and often it happens from the title, but the titles do not yield much as a title like this ‘Animal on the Ramp’ does not show either an animal or a ramp. Instead they show organic figures, strange flora and fauna, an underwater world feeling or an ethereal kingdom of strange creatures. Yet, the creatures are not fully formed though some of them have eyes popping out from here and there. Some pupa like forms gives the expectation of transforming themselves into fully formed winged creatures but that also does not happen here. In short, Pradeep Puthoor’s works primarily unsettle the viewer. But the good thing about this work is that cursory glances or visions tainted by wine do not help one to understand them. One has to stand and stare, if need be, for a very long time. The paintings absorb the viewer. After a long time, perhaps, a viewer is made to stand before a work of art and wonder what it is all about. 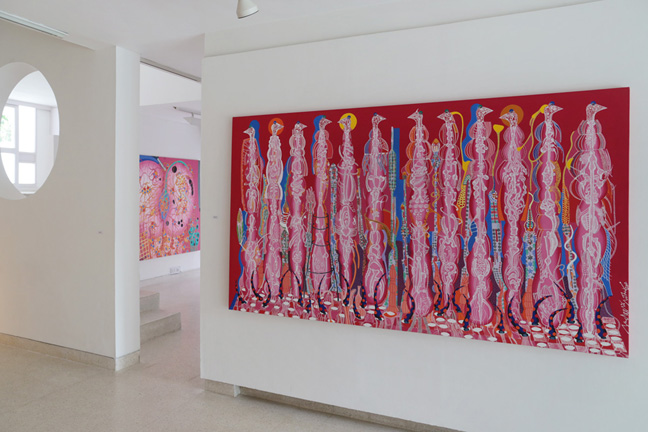 The paintings that one sees here in this untitled show are not abstract and they are not figurative either. Surprisingly, they are more about painting, the very act of painting than its representational possibilities. Each image is connected to the image next to it through an internal logic of painting. They look like a bone structure or a nervous system. Here the familiarity associations start. They look like anatomical studies yet not clinical or scientific. They look like internal organs pulled out, but without violence. They are not cross sections of heart or lungs. However, from a distance they could fool the viewer making him think that it is all about an internal space aesthetically externalized. Pradeep Puthoor’s paintings are strange landscapes where brushes and colours take a walk, a very long walk. According to the artist, the logic of the painting lies in the act of painting, not in conjuring up images. “We live in a complex world, where money rules and values decay. But I cannot be overtly critical of money because money is the driving force. But the question is how money and values co-exist without deteriorating into a vast land of dump yard where everything is in a state of decay. I capture this world of degeneration and if you look minutely, you could see how in this decaying world, everything transforms in a strange way, opening up a world beyond our comprehension,” says Pradeep. 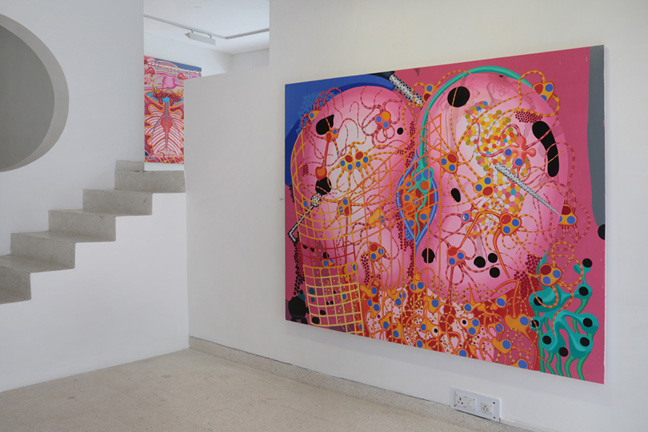 This world of slow deterioration is another matrix, exist in real and in imagination at once, having a sort of independence as a republic but without strict rules of governance and policing, and abundance of autonomy. The material world and the human beings who revel in materiality provide fuel to this transformation and they without knowing, live on a world which is caused by themselves, which is perhaps much more interesting than the world of malls, wide roads, heavy traffic and multiplexes and shopping complexes. Pradeep enjoys watching this world and when he makes his mural scale works, he almost feel the orgy of a new life existing parallel with our material world. This is not a spiritual world that we understand in the conventional sense. It is not an attempt to go within and beyond for the realization of the self, releasing the hidden powers. Pradeep’s pictorial world is neither a nether world nor a paradise. It exists right here, now as our extended existence, which we cause but refuse to experience. When he paints that world, only in the structure and composition, as an artist he makes certain interfering, otherwise he lets the images grow, exactly the same way this parallel world grows right here and now. But where does it exist actually? 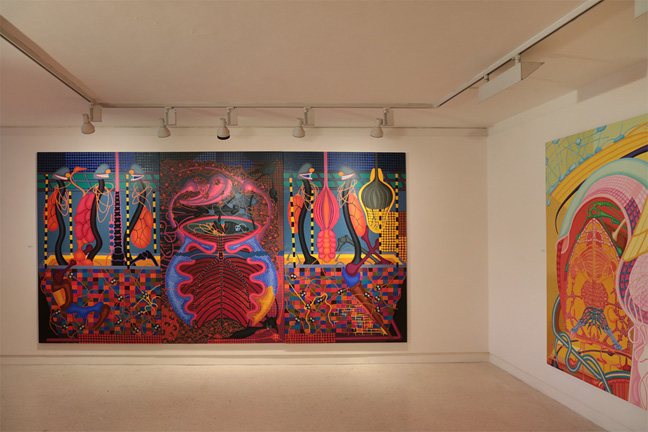 As I said, this world is not in our mind, it is not in our heart, not in our thoughts, not in our feelings, not in our passions, not in our consumptions. But it is in our acts, at the invisible ends of our acts. Whatever we do here and now, manifests in this invisible world. That means, almost like a butterfly effect, our actions causes these worlds; these worlds of beautiful decay. Pradeep, in one of his works, makes a Temple for Yellow Bones. If one really wants to feel comfortable with that painting, one could imagine a gothic structure with peculiar windows made of bones. But according to the artist, these temples are made by our own gluttony; our greed to eat, consume more and more. What we leave behind are bones and hairs that keep looking at our lives as hieroglyphics of disaster and destruction, which unfortunately we do not care to decipher. Hence, Pradeep makes a temple for these bones; perhaps all historical monuments are temples for/of bones.

Eventually, as an art critic I have to be at peace with myself. So I spend a lot of time before Pradeep’s paintings and look for familiar entry points. I have seen the early works of Pradeep, therefore these works do not shock me. However, I need to justify myself. Hence I start seeing Joan Miro’s surrealist abstractions in him, later on an altered version of the Damsels of Avignon. Then I reach a point where I could attribute any historical work to the ones that I see in the gallery. Finally I drop that attempt because I know that the strange eroticism of Pradeep’s work would take me even to Delacroix. That is a futile exercise and perhaps would go against the grain of my argument that these paintings as the invisible ends of our own making.
Posted by JohnyML at 9:05 AM