Making Gods out of Children is a Crime 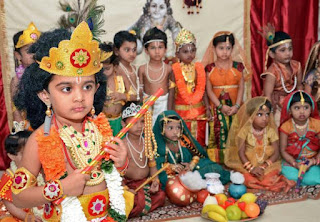 I may sound out of place when I say this: using children for religious processions is bad, especially in a socio-political climate where each religious symbolism carries a potential political message that could be interpreted and misinterpreted for dividing society along religious lines. Before going at length on this subject, let me express my reason for objecting this practice. My objection has something to do with social and ethical practices, which are related to the fundamental rights of the human beings to choose. As a child, a boy or girl does not have the ‘power’ to choose his politics or religion. What s/he chooses is the food/fashion/religion/custom/caste shown and practised by his parents. Often in our society women, children, diseased people and old people are treated as sub-humans than full humans. They are supposed to follow what the society/family/male tells them. Even if he/she has a different opinion about the things that are given to them, due to their powerlessness, they are forced to perform/follow against his or her wishes. My objection regarding people using children for religious and political purposes stems from the fact that they are deprived of their right to choose.

We are the slaves of customs. If I am born to a particular religion or caste, I am supposed to carry it till the end of my life. Generally it happens through very calculated ideological conditioning or indoctrination of the same through various ways of domestic and public practices. Within the social as well as familial hierarchies, children are the weakest links and they are the softest of targets that could be moulded and folded as per the wishes of the family and the society. The argument goes like this: children cannot choose for themselves because they are not earning for themselves. It goes more or less in the same fashion in the case of women, weak people and old people. Even if these categories, except children (growing up within protected conditions), are capable of producing money by selling their labour in various ways, if there is an able bodied male in their midst, their freedom to make choices is considerably curtailed. Children may cry, throw tantrums or even run away from the locations where they are to perform certain roles which they genuinely dislike. But they are forcefully brought there and are made to perform. This is some sort of cruelty. 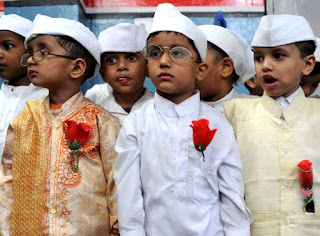 There could be counter arguments. They could tell me to shut and also they could shout at me saying that parents are the particular custodians of the children while the society at large plays the role of a general custodian. Custodians are sort of owners and they use whatever comes under them as properties. They would further tell me that if children are to be kept away from the religious things why we should isolate religion alone. Why shouldn’t we bring food, language, habits, manners, fashion everything under the purview of this choice theory? They may ask. That would be asking for the impossible why because we can change all of them in due course of time but religious beliefs are things that have such strong ideological bearing on the tender minds as mostly they are taught using the good/bad, white/black, pious/sin, god/demon, us/other binaries it becomes almost impossible for them to transgress to other religions at a later stage in life, though there are so many people choose to convert to other religions or no religion or anti-religion. One may change the food habits while living abroad, one may change language and accent in a new condition, one may change dress codes, one may completely do away with customs and manners. But religion, that is something difficult to change.

In that scenario, children become most vulnerable in ideological indoctrination. In India, where ‘Hindu and the other’ binary has been so rampant these days, we see examples of religious tolerance even by showing how children could be convertible entities in religious symbolism. Therefore a Muslim child wearing the costume of child Krishna and carried on hips by a burqa clad mother becomes a symbol of religious tolerance. The sight of three children wearing different costumes signifying three different religions ferried to school by a Sikh driver becomes all the more attractive because such facile symbolism satisfies most of us. The social media space has been invaded by such religious symbolism which in fact is counter-productive as the very symbolic premise is about underlining the otherness of the other (religion). A child who is brought up in such symbolisms carries it forward and the indoctrination becomes so strong an influence in the child psyche that he cannot do away with it till the end of his life. 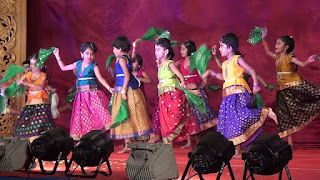 There is an argument that kids are dressed up as religious characters for the sheer fun of it. Some people at attach a lot of traditional values to it. They say it is a part of our traditional festivities and nobody used to think about this counter-productive symbolism. True, there was a time when people used to involve in religious festivals and related symbolic activities irrespective of religious colours. Those were the times of the nation’s re-imagining during the post independence time. The partition had already made the schism in the minds of the people. But there was a need to be together to take the nation a few miles forwarded. The political leadership was actively promoting and integrated culture through various religious and cultural symbolisms. Slowly, things started changing. The religious divide became quite rampant and since 1992 (Babri Masjid) the religious division became precisely and incisively pronounced reality. Things have never got better. To add fuel to the fire 9/11 happened in the US. Islamic militancy all over the world has given a new fear to our country’s general imagination about future. Politics has changed its complexion in India. Our country is no longer the same.

In that context, making children don the clothes of religious characters during religious festivals would be akin to nurturing a false pride about their own religions. They may enjoy it for the time being because they get new clothes and they enjoy the ambience with colours, light, song and dance. But it is deeply immersed in the religious context. The aggressive forms of games and sports which are redesigned and reintroduced in the semi-urban spaces by selectively picking up from their original rural contexts, such festivals that feature these sports and games become the avenues of physical aggression. It would obviously pass go into the heads of the children who are just present there. One could see the tug of war becoming a symbolic game, uriyadi (breaking a sweet pot), climbing a slippery pole and so on becoming a heady concoction of physical aggression combined with ambient music and dance. Children who are made up into Baby Krishnas and Rams and Hanumans suddenly get this aggression into their genes. There is no choice for them as their minds are so impressionable that they will not look for another choice even if there are many available to them by that time.

You may ask me should we object this when kids are asked to wear the clothes or dress up as religious characters in a non-religious context as in school festivals and so on. I do not object such conditions in which the children are asked to perform because the context is completely different and most of the time children have to be encouraged to play various roles according to their talents and performing abilities. However, I have seen the degeneration of such secular contexts too. With the arrival of strong Hindutva in our country, our schools also have subconsciously started choosing Hindu and Hindu nationalistic scenarios for school performances. Especially in northern part of India one cannot see schools asking children to act out a scene from the Badar war or a scene from the Arabian nights. Children are hardly asked to stage a crucifixion scene for their fancy dress competition (once upon a time in our school we, Hindu children fought each other to stage crucifixion scenes). But you will see teachers sending notes to the parents asking them to deck up their children as characters from Hindu mythology.

In such scenarios, one could say undoubtedly that there take place a lot of discriminations in the racial lines. I have seen horrendous examples of fair girls becoming fairies and goddesses and front line dancers while dark complexioned girls are pushed to side roles in the back row. The same thing happens with boys too. Fair boys are always asked to become Ram or Krishna (whereas both of them were dark skinned), or Netaji or Nehru. Dark boys are asked to become demons or bears. Such a humiliation for the unsuspecting children. But the parents might have faced once in their lives as parents that their dark skinned children asking why they were not given the plum roles. Now take the photographs or videos taken during such programs. Dark skinned children will be always out of focus because the camera person’s attention will be more on the central god or goddess figure and obviously all of them are supposedly photogenic and fair. This subtext of enacting religious themes in the schools scars children for their lives. Hence, all the children in our country should be given fair chance to become central characters several times in their school days. At the same time, children should not be used in public places as religious characters as it is not their choice to become such and such characters. In my childhood, when the secular fabric of our country was not tattered in this way, we never thought of having religious themes for school plays. Even our fancy dress competitions were all about sculptures, sculptors, drunken men, fisher women and so on. Nobody thought of bringing Ram and Krishna to the stage. And let me tell you, even if many of you object, I believe completely that kids masquerading as baby gods do not make a good sight; it may be nectar for their parents but for others it will be just curiosity and fun.

I am not just against children being used as propos in the religious scenarios. I am equally critical of the political scenario where children are rampantly used as props. In a recently concluded People’s Resistance organized by the Communist Party of India (Marxist), there hundred and one scenes from the protests where children are seen shouting slogans wearing red caps and waving red flags. The irony is the grown up people do not know the fundamentals of Marxism. What do the kids know? Will they become Marxists, communists, socialists? What are they going to do with this costume drama? They say catch them young. If you catch them young, you can make cannon fodders out of them. You can never make creative individuals. For example, in China and the countries where there is a particular attitude prevalent for Olympic medals, children are picked up from homes at a very early age like three or four years and train them for a particular sports item for ten to twelve years. They come, perform, take gold medals and go home. None comes to know about them afterwards. How many of us remember the Olympics gold, silver and bronze medallists in gymnastics, cycling, skating and so on? I am very critical of the political parties using children as props. Recently I saw a picture of a small child wearing an Aam Admi Party cap, in the facebook. I said it was obscene and a crime against the child. I do not know what they made out of my comment. But this is a country where free speech is shot down. I do not mind to be shot at for speaking my mind.