When a Muslim Interprets Ramayana: End of India Soon 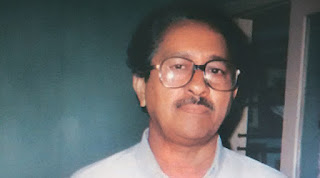 
J.Devika must be in a shock now. It was in the last month she finally wrote a letter to the editor of the Mathrubhoomi News paper that she had decided to stop the subscription of the newspaper because the paper had been giving exaggerated news on Hindutva and imbalanced views on Dalit and minority issues. Her letter had gone viral in the social media and many people including this writer had welcomed her move. But now it has become all our duty to save Mathrubhoomi from the hooligans from yet another Hindutva outfit namely ‘Hanuman Sena’. Dr.M.M.Basheer, a renowned scholar of Malayalam and Sanskrit literature was threatened by this outfit and he was forced to withdraw his column on Ramayana halfway in the Mathrubhoomi Newspaper. Once he started his six parts series in the said newspaper, Dr.Basheer started getting threat calls asking him to back off from finishing it. Finally, by the fifth column Dr.Basheer decided to call the series off, publicly expressing his disgust by saying that at the age of 75 he had been reduced into just a Muslim.

What offended the Hanuman Sena is Dr.Basheer’s take on Lord Ram. According to the scholar he was appreciating the sage poet Valmiki’s ability to delve deeper into the human psyche which could unearth the human side of Lord Ram, who was primarily a king and a husband later. Hanuman Sena was not that large hearted enough to take the arguments of Dr.Basheer. They threatened him and also threatened the editor of the newspaper. I do not know what exactly is the stance of Mathrubhoomi on this issue, however it is said that the counter arguments of the editor also did not hold much water for the hooligans from this Hindutva outfit. I could see a special report on this filed by an online news portal, ‘the news minute’ and also could see some pictures of the members of this outfit. 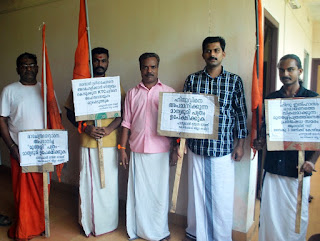 The names of these members are very interesting, Tulsidas, Bhaktavalsalan etc. Tulsidas, by the way is the name of the composer of Ramayana during the Bhakti movement during the fifteenth century. Bhaktavalsalan is a generic Hindu name with an over doze of Hindutva meanings. I doubt whether these names have led them to this outfit or it is just a coincidence that they have this name since birth. But I have strong doubts that these names are adapted to cover up their normal names as Suresh or Subhash. What surprised me is the presence of two women wearing saffron sarees in the protest march held by this outfit to the newspaper office.  Do these women know that Hanuman is a nitya brahmachari (permanently celibate) and the iconography does not entertain any woman other than Sita. The banner that these people carry says that it is a national organization though the reports say that it has only fifty odd members and it is hardly three years old. Also the banner has a subtitle before the original title that reads like this: Sacrifice, Service, Goodness, Security, Adventure and Culture. As a person who knows Indian mythology I should have any doubts on these qualities of Hanuman as a demi-god. He is the embodiment of all these.

At the risk of inviting some Hindutva ire, I would like to say that Hanuman is a character who is blinded by faith. Even the sincerest of the servants would question their masters when they are about to commit some blunder in their lives. Hanuman, being a monkey gentleman and also he is adopted from the sub-human regime of the south Indians, he is often shown as a person who does not discern when it comes to action. He acts on duty and he has unquestioning trust and complete faith in what his master says. His lack of discerning is with him right from the beginning. He flies to the morning sun thinking that it is a fruit. He is crushed down by Lord Indra, causing damage to the baby Hanuman’s jaw bone. Later, during the Lanka War, to revive the fainted duo Ram and Lakshman, Hanuman is sent to the Maruthvamala (Maruthva Hills) in order to fetch Mrutha Sanjeevani (an elixir that would revive the fainted and dead). As he could not find the medicine, he brings the whole hill on his shoulders. We have so many instances to doubt his discerning capacity. In Lanka when he goes to give Ram’s message to Sita, once captured he burns his own tail to gut the city of Lanka. Later he brings the happy family back on his shoulders. And when asked to show his devotion to the divine family, he tears opens his chest and shows the picture of Ram and Sita. Where else you would find this blameless servant. But Hanuman is relegated to the backdrop when Sita is about to be casted away to the forest. He does not have a voice nor does he question his master. Hanuman is a master of servility and at the same time he is so fond of adventures. 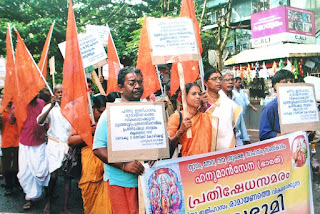 Lack of discernment and enthusiasm for adventure are what make Hanuman Sena distinct from other cultural organizations. There are many Senas like that. We have not yet forgotten the bad deeds of Ram Sena in Bangalore. The members of this outfit dragged boys and girls out of beer pubs and performed their moral policing the worst way possible. But the extremists were publicly shamed by the Pink Chaddi movement initiated by a bold woman journalist. Now Muthalik, the leader of the outfit is barred from entering places like Goa. Though the court order that debars Muthalik from entering Goa gives some hope to people like us, our headache is made severe by the sudden appearance of Senas like this. Hanuman Sena is on an adventure trail. It just wants to cause nuisance in our society. They know for sure that whether they are approved by the RSS or BJP headquarters or not, eventually when it is bracketed as a Hindutva organization, they cannot be treated as pariahs by the mainstream organizations. Hence, their vandalism will create hue and cry and they slowly start getting public attention. Once they are in the public eye, their power and money would draw the fringe youth to it. Slowly the non-existent outfit will grow into a muscled and moneyed mainstream organization.

What should be done is one question that comes to my mind. If our political parties have any will to govern left in their minds, they should immediately arrest these people. Hinduism is not a religion that will be disturbed or destroyed if an Muslim scholar writes about Ramayana appreciatively or critically. Hinduism cannot be a brittle religion that needs hooligans like Hanuman Sena to protect its followers or their ethical beliefs. The government should come forward to ban the organization and also put everyone involved in this organization into jail. Here we have a state that is hell bent on hunting down Maoists and other human rights organizations who stand for the dispossessed people. When they are put into jails, the fringe hooligans are let free so that they could stop scholars. The government should learn from the latest political and religious developments in our country. It was just a week before Dr.M.M.Kalburgi was shot dead in Bangalore in broad day light by the Hindutva hooligans. His crime that invited death penalty by goons from the religious outfit was his staunch stance against religion on behalf of logic and scientism.

(Where do we come from, what are we, where are we going? Painting by Paul Gaugin)

Goa based artist and social activist Dr.Subodh Kerkar had once articulated the mindset of people whose religious sentiments are hurt even at the drop of a hat. Dr.Kerkar calls it ‘Sentiments Hurtitis’. This neologism lampoons the easily hurting sentiments of the people. They are the people who cause a lot of social unrest. Sentiments Hurtitis has become a social religion now. When the poet and scholar A.K.Ramanujan’s ‘Many Ramayanas’ was introduced for graduate studies in Delhi University, it was banned after protests from the Hindutva outfits. When Perumal Murugan wrote about a religious custom in one of the obscure villages in Tamil Nadu in his novel ‘Mathorupagan’ (Ardhanaareeswaran) , he was forced to commit a symbolic suicide by the Hindutva activists. Perumal Murugan declared that he would never write a word as literature and he has killed the author in him. Wendy Doringer’s book on Hinduism had been withdrawn from the shelves and the publishing giant, Penguin was coerced to pulp the remaining copies of the book. There are a lot many other writers who have been persecuted in India for having a different opinion.

Famous 19th century artist Paul Gaugin in 1897 painted a large mural scale work and titled ‘Where do we come from, what are we and where are we going?’Gaugin painted this work when he had just shifted to Tahiti islands from Paris. His retreat and the decision to take a retreat had caused a lot of existential crisis in him. He wanted to question the basic idea of being a human. It is high time that we too ask the same question. Where do we come from, what are we and where are we going? If we have a clear answer to this question as a whole, I think we have some hope for redemption. Otherwise we are going to be reduced into blood and filth before we could understand what has befallen on us. People are out there to take away our lives if we are ready to speak up. If we do not speak up, we would be partners in crime. Illustrious poet, Dante had said in his poem, Inferno that during the time of crisis the crime is to take no part. It is high time that we all stand up, speak up and also act for our rights. When a small outfit of hardly fifty people could stop a writer, tomorrow a larger crowd could silence the mass of writers and artists. It has happened in the world. And the world has paid for such atrocities with the Second World War. Is India going to be the cradle and reason for the Third World War? Considering the world crisis, we may sigh in relief because there are more crisis ridden regions in the world. But ours is a rampant spread of religious and intellectual intolerance. To kill a civilization bombs and weapons of mass destruction are not needed. Just the silence of thoughts and censorship on free speech will do. And we have enough of it.
Posted by JohnyML at 11:22 PM