Crossing the Lakshmana Rekha: Absence of a Curator 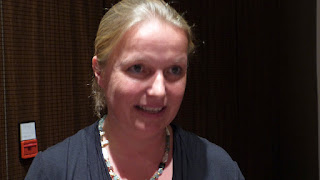 
The role of a curator in an exhibition is many things including being a check point ‘for/of the spontaneous overflow of powerful feelings and emotions’ of the artist who at times fails to understand where to draw the line of control. This creative overdrive could be hazardous for a solo show which is neither a retrospective nor a stock taking kind. A solo exhibition is often an exhibition by a single artist who would present his/her works done in a particular period of time, mostly with thematic as well as stylistic coherence. A curator helps the artist to build a coherent narrative which would take the viewer to those zones of understanding from where he/she could take off to a preferred trip of making sub-narratives, meta-narratives and even counter narratives. While both creating as well as interpreting art could be whimsical to certain extent, it is curator’s job to hold the logic tight and in place so that the madness of making and interpreting could be methodical therefore palatable. Absence of an architect or planner could make a city of cancerous edifices and the absence of a curator could make an exhibition metastasizing itself into innumerable artifacts which perhaps say the same thing again and again, like a ‘like a tale told by an idiot’. 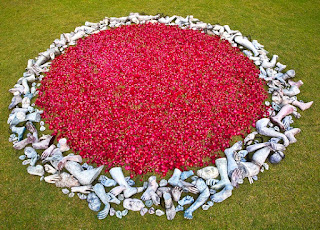 
When I stand before the works of Goa based Indo-German artist, Katharina Kakar exhibited in her first solo show ever at the Visual Arts Gallery, IHC, New Delhi, I remember Shakespeare who qualified life as ‘a tale told by an idiot full of sound and fury, signifying nothing.’ That does not mean that my attempt is here to write out Katharina’s first solo show. Titled ‘Crossing the Lakshmana Rekha- Shakti, Sensuality, Sexuality’, this exhibition is curated by Dr.Alka Pande and strangely I have been looking for the touch of the curator throughout the show but in vain. My statement needs qualification and to furnish it before the reading public, I would like to analyze the basic theme of the show and then would like to go on to see how the curator’s hand is absolutely absent in this show which thrives on multiplication of ideas and artifacts. The show, as the title implies is all about the assertion of the takes of the ‘empowered women’, their ability or inability to articulate the sexuality and sensuality, and if at all articulated the ways in which such articulations are handled in the conventional Indian society. Katharina being an anthropologist who has been working amongst Indian women for more than two decades now, has a very good grip over her subject, but I need to add that a complete grip on a subject would not perhaps make one a good artist exactly the way his genius in economics would not make Dr. Amartya Sen a great painter of poverty alleviation. 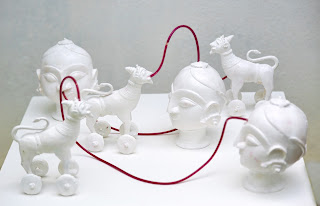 
The mediums that Katharina uses range from the traditional to found objects to the industrial products. Except for a few mediums she has touched almost everything that is employed in creating works of art. A cursory survey would bring the following mediums into our ken of attention: bronze, copper, fiber glass, wood, wax, pen, pencil, paper, plastic, digital imaging, resin, iron, steel, flowers, clay, liquids resembling blood, books, video, lettering, light, latex and so on. There are rugged surfaces as well as highly polished ones. There are two dimensional works as well as three dimensional works. Katharina has raked through ideas and mediums like a greedy child in a confectionary shop. She has done a lot of works that would satisfy her non-stoppable flow of ideas. The gallery looks very impressive with all these works but the moment you progress from one work to another, a sense of futility start enveloping you for the simple reason that you get the insatiable urge of the artist to hammer in her ideas into your head and you start slowly resisting it. Result is the rejection of the show after the initial feeling of awe. 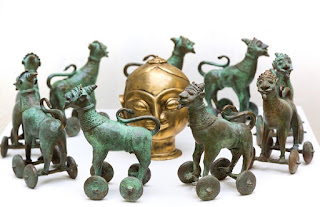 (Circling the Universe by Katharina Kakar)


I know Katharina personally and I had seen her foray into the field of visual art in a collaborative work with the noted artist Subodh Kerkar on the ideas of mortality, vanity of life through the unclaimed bodies in mortuaries. She had recited her sociological and anthropological findings in poetic verses, wearing black clothes before a sculptural rendition of a dead head by Kerkar at the Devi Art Foundation in Gurgaon in 2012. After that not so purely visual start, Katharina had invested her energies in writing a book titled ‘Moving to Goa’ which was a very hearty narrative on Goan life in general and her own life there in particular. In this book Katharina describes how she and her psychoanalyst husband and author Sudhir Kakar bought an old house and turned it into a new abode, redesigning it inch by inch. She gives a graphic description of the working patterns of the Goan laborers who come to the premises to rest rather than work. Katharina’s anthropological and sociological training and experience had fully shown the varieties in this writing. However, I wonder how Katharina has lost that power of narrative and discretion in her first solo exhibition which is under consideration now. 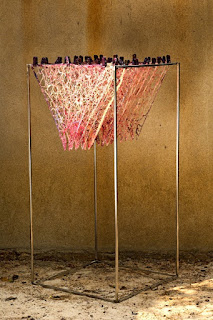 (Hang out to Dry- Katharina Kakar)


This is exactly where I will pinpoint the absence of a curator. As an artist, Katharina has done her best to bring out her pet themes of sexuality and sensuality, and women empowerment, using very special and personalized metaphors like skull, broken limbs, ears, lit up holes, breast like figures, blood flowing veins, vagina, chilly and so on. ‘Crossing the Lakshmana Rekha’ is a field of red petals encircled by the broken limbs of a woman. ‘December 26, 2012’ commemorates the tragic death of Nirbhaya, the rape victim in a Singapore hospital; Katharina has made a very powerful work by using two found objects to suggest forced penetration. ‘Memory of the Future’ is a set of wax skulls pigmented to show the future death of female infants in the Indian shores. ‘Screw You’ is a set of wax chola bronze like female heads with screws pushed into them. ‘Saptamatrika’ ironically connotes the guardian angels (seven Devis) of the villages but Katharina aesthetically minimalizes them into pregnant pot forms fitted with breast like protrusions. ‘Hung out to Dry’ is a series of resin made emblematic vagina’s hung from wax cover clips. Reduction of women into mere vaginas is suggested poignantly in this works. 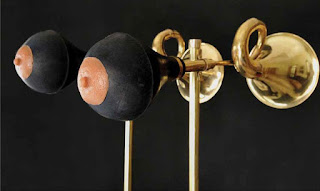 
These powerful works somehow fails in the midst of a group of other works that are deliberately done with some sort of Indian-ness in mind. The patina-ized, pigmented bronze chillies, Shakti piths and so on somehow kill the effect of the other works. Katharina has extensively used verses and images from Kamasutra, the ancient Indian manual of sex, which in a way had liberated women from the male domination. Katharina uses this as a tool (Sudhir Kakar also is very much interested in this text and he has come out with a novel titled ‘The Ascetic of Desire’ too) in order to highlight the possibilities of women’s latent sexual prowess and their ability to express it in ‘heat’. A show with such good intention however goes out of hand of the artist because of the unedited feeling given away by the show. This is where the curator has come to help the artist to pick, choose, edit and display the works. Following the trail of Katharina’s thought, curator Alka Pande also has talked about the artist’s affinities for Marina Abromovic, Louise Bourgeois, Christian Boltanski and so on. In fact Alka Pande uses almost ten names both from India and abroad to substantiate the works of Katharina and forgets to edit the works that have added excessive baggage to the show. Interestingly Chris Deacon, the director of the Tate Modern also has come up with a series of names ranging from Eva Hesse to Yayoi Kusama. Is it because that both these forward writers want to see Katharina in the league of these international names? 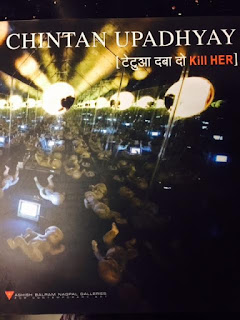 
The exhibition proves that simple name dropping will not help any artist to come up with a good show. Katharina’s exhibition could have been really great if she had received curatorial help and edited out fifty per cent of the works from the exhibition. The drawings that she has done do not show any affinity for the cutting edge works that she has done in unconventional mediums. They look as if done by two different artists. The curator has not given any proper reason for including those drawings in this show. Also Katharina has carried away by the idea of Indian-ness. Many works look like three dimensional versions of Raza’s paintings. In my opinion, Katharina could come up with a series of good works if she practices self-restrain. Art is a way of telling things subtly and covertly; art of art is concealing art. But Katharina’s show looks like a protest march rather than a piece of music that makes people think. Though the curator has forgotten certain works that had appeared before Katharina’s exhibition, I need to remind the artist about them for the sake of clarity. In 2007, Chintan Upadhyay had done an exhibition titled ‘Tetua Dabaa Do or Kill Her’. This was a studied result of Chintan’s explorations into the darker arenas of female foeticide prevalent in Rajasthan. In 2013, Megha Joshi had responded to the Nirbhaya issue with a very powerful work that used breast forms as blow horns in a show titled ‘R.A.P.E’ curated by me. If the curator is aware of such exhibits already existing in the Indian art scene, then definitely he/she would find different ways of a presenting a new artist. Katharina Kakar can do good art provided if she works with right curators and in different studios.