Impossibility of Death in the Mind of Someone Playing: Pradeep Mishra's Mother Land 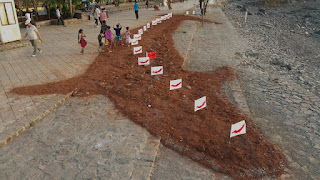 
Imagine a scenario where works of art come out of the studios, lockers, collections, galleries and museums on their own volition and occupy the streets all over the world. It should be a magical opportunity to see them out there demanding attention from the people and in due course of time facilitating a change in the world view of the people in general. After seeing Guernica spreading itself at the far end of a main street, I do not think people could plot another genocide or riot. A wheat field would look all the more alluring if one accidently confronts the yellowness of a Van Gogh’s painting. A sunflower cannot be the same; a morning cannot be the same. Works of art have this strange alchemy of turning human beings into gold. But unfortunately, with social media in hand to entertain oneself into the masturbatory pleasures of silliness (not forgetting its use primarily as an information interface) less and less people venture into the museums and galleries, especially in India. Those who do, either come out with a sense of loss or with a sense of desire. Those come out with a sense of loss are the ones who are thrown into a contemplating mode by the works of art they have just seen; those desiring lots want all those works of art to be in their private homes. The rest of the world just goes on. 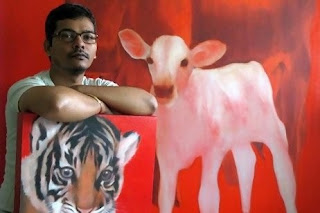 When a work of art comes out in the public the perception of the people changes considerably. Just remember the recent social media craze of looking at works of an artist in Bengaluru who placed artificial crocodiles in the hopeless potholes in the much celebrated Bengaluru streets. A work of art could bring attention to the problem, stir the conscience of the people and also shame the ones who have caused those problems. Perhaps, these days a work of art is very carefully looked at by the moral police in our country; they just want to know whether the works of art are hurting the brittle sense and pride that we uphold on our religiosity. However, it is so heartening to see that more and more artists are now coming forward to do works of art in the public spaces not just for their names to be remembered by the posterity but their innate desire to change the very visual culture of the places where they live or where their works of art are asked to live in. It is in this context I got really drawn to a simple and impermanent work of art by the Mumbai based artist Pradeep Mishra. Done in Carter Road, Jogger’s track, Bandra as a part of the Bandra Celebrations, Pradeep’s work is titled ‘Mother Land’ and is a 90 feet long earth work in the shape of a blue whale with several white flags showing blood stain on them stuck on the body of the ‘earth whale’. 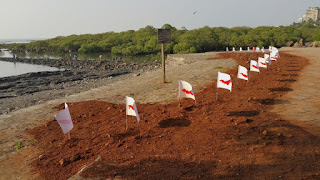 Motherland or Mother Land, for me the title in our present context, sounds so powerful, well thought out and ironically evoked. Pradeep being an artist who has been working on the lives of the simple creatures on the earth including ordinary animals like water buffaloes, cats, dogs, horses, birds and fish, and giving them iconic status not only in the world of art but also in our own inner selves, chooses this word ‘Motherland’ carefully. Though it is not so intentionally political and his idea is to suggest that the human callousness all over the world causes the depletion of natural environment and its beings, in our country’s contemporary context we could easily see that mother land is an issue for all the jingoists attached to the dominant religious and political ideology. The idea of mother land is evoked at any given point in order to fill in people with the false idea of nationalism so that the conflicts zones of the world could be maintained for the purpose of the international arms and power trades. The idea of mother is so ingrained in the Indian psyche that anything that is prefixed by the idea of mother becomes automatically sacred though we have this tendency of sending our mothers to asylums, old age homes and destitute shelters, and generally disregarding women at any given chance. But ironically the very propagators of this ideal mother-ness which could be easily translated into blind nationalism (which was useful for some time in history during the anti-colonial struggles) ruthlessly vandalise anything related to ‘mother’ including mother earth and its harmless beings. For Pradeep, like many gigantic creatures that have faced extinction, whale is also on its way out. 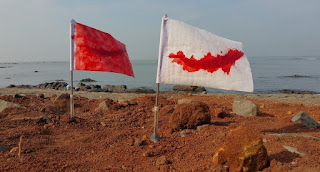 Whale suddenly becomes a metaphor in Pradeep’s land art piece. What is this whale? In our day to day lives we do not come across whales. Our cultural memory has already relegated them to the museums, television programs and text books. They have become a sort of taboos so that human vandalism will not finish them before time though anyway they are getting killed for fun. In a deeper thought that any work of art would induce in human beings over a period of time, especially when they know that the very work of art is impermanent, they would become conscious of the whale imagery. If whale is on its way out, what about human beings? Aren’t they too looking for their auto ejection from the world? It is not just about the mere death; it is about the death of the mother earth itself. It is bleeding to death. Any kind of exploitation is a fissure created on the body and soul of the mother earth. And like spikes fired at the bodies of the whales by the fun hunters in the deep seas, Pradeep fits white flags (again look at the irony; white flag is the sign of ceasefire and peace) which are stained by blood (every war is fought for the maintenance of peace. How more childish world leaders can be?) on the whale’s body suggesting that every war that is fought on the idea of establishing peace slowly kill the human race. The erasure of life from the face of earth is not just quick but a slow bleeding process. 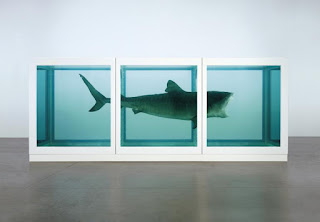 I do not know whether Pradeep was seriously contemplating on the parallels this work of art could generate with that done by Damien Hirst in his iconic and hallmark work titled ‘The Physical Impossibility of Death in the Mind of Someone Living’, using a dead shark in a formaldehyde filled vitrine. It was an ultimate reminder of the eventuality of all human beings and the futility of desires. One could say that it was one of the biggest Zen works an artist could have produced in his life time. Interestingly, though Hirst has produced more interesting and expensive works later, he has never done something so deeply meaningful as his shark work. When I look at the work, ‘Mother Land’ by Pradeep Mishra I am simply reminded of Hirst’s magnum opus at a very early age. Pradeep’s work in comparison with Hirst is of less consequence due to its impermanency but the psychological impact it could create is but no less than that of Hirst’s. For me it is not a forced comparison because the spirit of ideas seeps into the members in the world of creativity slowly but steadily. The subconscious revival of any memory is welcomed because that’s how a work of art and the ideas that it evokes live through generations. On a certain day, when the authorities decide, Pradeep’s work may disappear from the earth just like the species that disappear one by one. But the memories remain and those children who have played on it would remember as each time they cross Bandra as tired executives of future, that there was a whale here once and we had played on it. Perhaps, such fond memories save the world from quick extinction. 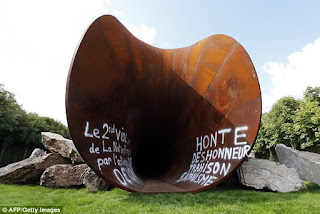 Pradeep too two months to conceive this project when Art Oxygen, the curator of this project invited him to be a part of this festival of public art. And he took two days to execute it. It took perhaps another eleven days for people to sponge the meanings of it into their minds. In Pradeep’s own words, there were some funny mischief done on his work but then it is how it becomes a part of the city, of the people and their memories. One must remember how Anish Kapoor, the world renowned sculptor recently responded to one of the attacks (vandalism) done on his public sculpture (somebody had scratched it) in France. Instead of repairing it or criticising the attackers, Kapoor said that the work should be left as it is. Incidentally, when he speaks about intolerance in India, it comes from this almost Gandhian attitude of tolerance for the attackers of his own works. Pradeep also seems to keep the same tolerance level regarding his work. What makes Pradeep’s work important, poignant and worth memorable is its simplicity and the total absence of pretence. These days in India, as a few artists are going around literally painting the cities in the name of public art and well protected and supported with the funds from the public and private agencies and claiming their works’ relevance using high jargons, Pradeep stands in clear contrast. There is no claim and there is no sloganeering. What Pradeep has made permanent in our minds is the idea of saving this earth, which though sound quite school bookish is a very relevant and worth upholding one. Personally speaking, I want more and more works of art come to public and I believe art is the only organic agent that will change the chemistry of aggression into the physics of tolerance.