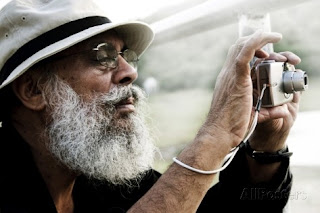 
Himmat means ‘courage’ and ‘Himmat Shah’ means ‘courageous sculptor’. By the time you come out of the Kiran Nadar Museum of Art, Delhi where a massive retrospective of the veteran sculptor, Himmat Shah, titled ‘Hammer on the Square’ is currently on, you would definitely say, “He was quite courageous.” Fifty years of active sculpting, mural making and drawing have finally brought him the due recognition, which has been evading him for a long time. Like a hermit, Himmat Shah was living in the Garhi studios for many number of years, making works, telling stories both spicy and serene to all age groups of visitors and celebrating life in its simplicity till the market boom brought him money and the freedom to relocate himself in Jaipur. The retrospective at the KNMA has around 300 works of Himmat Shah of which as the website of the organization claims, 215 belongs to the museum itself. Such a vast collection should be anybody’s pride possession especially when the totality of its presentation is met with wider awe and acclamation not only for the artist but also for the collector.

The stories yarned by Himmat Shah have caught many an unsuspecting listener into the web of it and made him or her, a permanent admirer of the artistic and narrative genius of the artist. Interestingly, Himmat Shah’s sculptures and the drawings that often triggered the sculptural renditions do not have this narrative verve as their static nature itself is quite magnetic and thought provoking. The early drawings abundantly displayed (must be the result of the bulk buying which is called ‘buying the studio’) show the young artist’s experimental itching that moves from mere line games, structural drawings and very figurative and expressionistic erotic drawings. And one would be enthralled to see corresponding sculptural formations displayed tastefully in the galleries. There are so many photographic documentations of the artist with his contemporaries, spending lighter moments as well as involved in the working process. These works and documentations together make this show worth visiting. 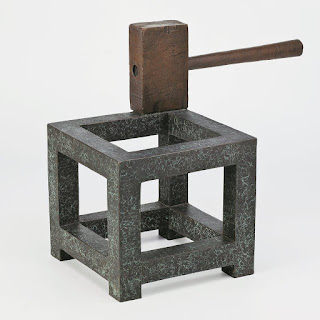 (Hammer on the Square by Himmat Shah)

Famous for his ‘heads’, Himmat Shah’s oeuvre however does not start or end with heads. Taking inspiration from the post-Rodin modernist sculptors like Brancusi, Tatlin, Epstein and many other minimalist sculptors the second phase of Himmat Shah’s sculptures are mostly unlike the well-known Himmat Shah works. The idiom and also the mind that had inspired those works seem to be absolutely different from what we know of him today as the artist was trying to make a point or asserting his presence in the very sculptural scene of India in 1960s and 70s. Hailing from the Baroda school, Himmat had already gone through the phase of making murals and metal based sculptures, perhaps inspired by K.G.Subramanyan, and also worked with architects in Ahmedabad. The metal sculptures of this time also prove that Himmat was not yet at peace with himself.

The minimal sculptures that parody and also sincerely follow the western modernist sculptural idioms tell us how Himmat was caught between two different worlds. And his self-doubts were not really ‘performed’ in sculptures but had found their way into the drawings. Each sculpture in this genre has a small metal flag flying atop curiously suggesting their Indian origin. May be he was trying to tell the world how sculptures imitate the temple architectural forms in their very organization or it could be a surreptitious critique on the growing right wing ideologies within our country. But so long as we do not know the political leanings of the artist in details we cannot just pin this point on his sleeves. Though the artist is famous for his erotic bend of narratives, his sculptures do not present or represent any of these the way Picasso used to do in his sculptures. There is also a Giocometti phase in Himmat’s works where the contours of the bodies that he created as well as the very volume of the sculptures go very lean, rugged and thin. They may not be evoking the existential feel which the Giocometti sculptures would evoke even by a fleeting look because Himmat seems to have not continued that existential ‘thing’ in his sculptures his Swiss counterpart had followed. 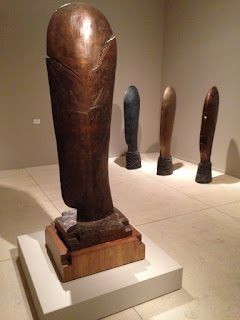 Himmat as a true modernist has followed the steps of Picasso who had been inspired his findings of the tribal sculptures. Perhaps, our artist might not have felt the same need to drink from the same source as Picasso had done, but he definitely has taken a lot of inspiration from the ‘heads’ that Picasso had done especially in his paintings. In Himmat, I should be underlining, we see the flowering of human heads into a different spring. Himmat makes the heads again and again at different periods, going back and forth in his inspiration, tries out different materials, compositions, styles and so on, only to achieve the same brooding results, an array of heads, that has made his hallmark style noted and famous. They look like the skulls of some beings once inhabited the planet earth or some alien planets. They strangely resemble the human beings but their contours are defined differently. Himmat draws the features minimally using dots and lines; he leaves the hagiographic details alone and at times nullifies them. They are suppressed, compressed, elongated, pulled and pushed- but they still have the brooding look.

The more you look at the heads of Himmat Shah, the more you come to know about their presence and after sometime you feel that it is not you who watch them but you become the object/subject of their watching, observes his friend and contemporary, Krishen Khanna. It is true that we also feel the same. The heads are beautiful at times, they are broken and bruised at other times, they are cut into two but not yet parted, and yet other times they are bleeding to eternity. They look like the fossils of some warriors who have fought greater wars to establish the kingdom of thinking. They are done in different mediums and for Himmat nothing excites him more than the basic medium of clay does. Most of his works are fashioned in clay and baked. He literally ‘works’ on clay and he makes ‘war and peace’ with clay. When the same works are casted into bronze and also works are done for bronze casting, they have a different feel about them. In KNMA you have it all. 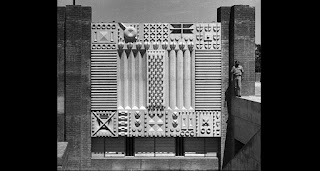 (Himmat Shah with his mural in Ahmedabad)

I remember sending one work of Himmat Shah to Kerala for a buyer which was sourced from Delhi. One of my friends had promised me to ferry to Kerala by train. It was at that time I heard that Himmat’s works were sought after by the buyers. Something was being cooked up. Nobody was writing about Himmat but everybody was saying he/she should have a Himmat work. This added interest in Himmat had brought him once again into the focus from his almost recluse life in Jaipur. People started visiting him and in one of those visits that I did with the biggies of contemporary art including Subodh Gupta, he told the gathering that at least we all should go to London as it was a great place to visit. Perhaps, Himmat was making a joke. He had gone there for a knee surgery and he was very impressed by the city of London. Most of us had even lived there for some time and Himmat was absolutely oblivious of the fact that these youngsters were spending most of the time travelling in other countries than sitting in their studios working. Himmat still remains a simple man though less active in his sculptural production.

KNMA is a rich organization but unfortunately it has not brought out any brochure or hand out material for the show. There are some hefty volumes produced in the last couple of years and all of them are collector’s items, and obviously not meant for research purpose. One of the book claims that each book has a different terracotta element on the cover specially done by Himmat himself. And the books being limited editions and collectors’ items, they are definitely going to rot in some shelves. KNMA should bring out readable and handy volumes about the artist for the use of the public as well as the researchers. A book becomes worthy of being called a book only when it is opened and read. A collectible book is not a ‘read’ book. A collectible book is a show piece that serves the purpose of boosting somebody’s ego. Those people may make money out of Himmat’s works in the coming years who have these works and books in hand. But the artist would die so would his memories if you do not produce history that is worth reading. Surprisingly, even the website of the KNMA has only one image of the show. Is it stinginess or arrogance? If it is for a selected few, then why show at all?

Absolutely agree with your concluding remarks...