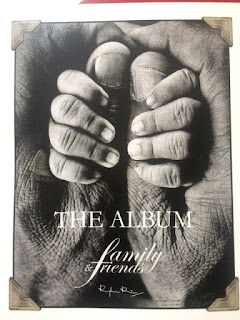 “Which brings me to togetherness and separation-you may part with a person after years of being together for various reasons. Emotional or sexual incompatibility could take a toll, as you drift off in opposite directions. The fall out is never easy or straight- it is not a sword slashing straight through the two. In my case, at least, I feel that some part of the other person comes along with us, and some part of us, for sure goes with the other. And so, we learn that there is no o black and white, and the pain lingers on in grey,” writes Raghu Rai in his book ‘The Album-Family and Friends’. This book came to me yesterday evening and surprisingly another book by the ace photographer was waiting for me in the boot of a car in the same evening. Titled ‘Vijayanagar Empire- Ruins to Resurrection’ this coffee table volume has a straight jugalbandi in it. Raghu Rai clicks the photographs of Hampi, the ruin of the erstwhile Vijayanagara Empire now located in Karnataka and his former wife, Usha Rai writes the text. In Hindi they say, ‘jab bhagvan deta hai, deta hai chhapad faad ke’, which means, ‘when god gives he gives in abundance’. I was happy to carry these two heavy volumes for one and half kilometer. I walked all the way like a mother carrying the burden of her kid happily and determined. When it comes to books, I too am like a mother though this mother in me does not like the traffic in Delhi. 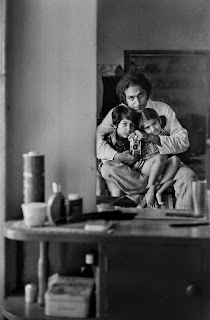 The titles of these books by the veteran photographer Raghu Rai set me thinking. Here is an album of his family and friends, taken mostly by himself and in some of them wherever he is the subject of the picture, taken by a close friend who too is a photographer. The albums often take us back to the memory lane. The moments of our inexplicable joys and endless sorrows come back together to the present unsettling us for the time being. We recover and recompose ourselves by deliberately pushing the memories between the thick covers of a family album. But albums tell us how we were, how we have been and how we are. They are the touchstones of our own physical worth. They not only embody the aesthetics of the times but also that of the photographer who has taken it. The more we look at the old photographs, the more we think about the photographer who had taken it. He or she is always absent. That’s why perhaps, in the frames where Raghu Rai himself is absent, but his kids or wives are present, he always captions the image as ‘Avni with Papa’ or ‘Lagan with Papa’ and so on, them being his daughters. 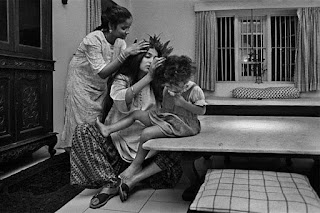 (From 'the Album' by Raghu Rai)

Raghu Rai in the first book confesses that had it not been the pressure and support of a few people in his close friends’ circuit he would never have made a revisit to his own family photographs which he had taken over a period of four decades. There is always some trepidation in visiting the old memories and images especially when some of the subjects in the book have exited from the author’s life perhaps not in a good note.  In retrospect when he recounts the event of separating from his first wife, Raghu Rai sounds calm and philosophical but only the people involved, including him know the actual depth of the pangs. This mood of lingering pain is there in this album collection because though the celebratory moments are so palpable in the photographs, the women subjects of the photographer somewhere carry a tinge of pain, doubt and anxiety in their faces. As his children grow up, their happy abandonment gives way to some sort of grave expression on their faces however they try to be happy and flying. Raghu Rai perhaps knows this and that’s why he has to come with such a statement in the writing. 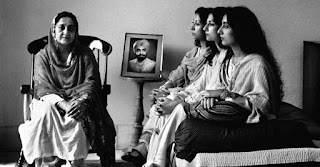 (From 'the Album' by Raghu Rai)

It is a book of confession as far as Raghu Rai is concerned, it seems, though he would not agree with my point of view on this. Most of the photographs that he had taken towards the end of 1960s and also during the period of his first marriage look more happy and contained than the exuberance that one sees in the photographs that he has taken during the second marriage and after. Here I am not attempting to do any value judgment nor do I want to pass a judgment on his life. However, as Raghu Rai is a human being with emotions and possible determinations and indeterminations, confusions and resolutions, behind his tool called camera, obviously all those emotional issues would have affected his frames. That may be one reason why he took so many years to publish that book. And in one place he questions himself for being reluctant to publish these photographs and finally he gives it a try. The book has also got a very touching documentation of his friends and also by his friends. 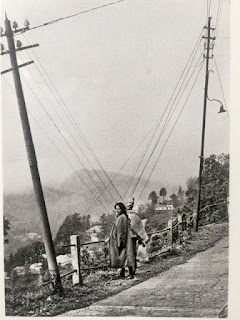 (Himmat Shah and Sujata in Mussoorie by Raghu Rai)

Raghu Rai’s books, if you read a few of them, do not give a variety of narratives regarding his own life for he has a very straight about him becoming a photographer. One may even think that the first part of his writing in many of his books is the rehashed version of the original story. One cannot expect a different narrative about his own life in each book; but there could be ways of putting it differently, which Rai seems to be very reluctant to do. But when it comes to the verbal narratives about the works and the events that triggered those works he becomes a very sensitive writer too. The Album, published by the Raghu Rai Foundation is definitely a worth reading and worth looking at book. He is by all means one of the greatest photographers in our times. What gives his works a touching sense of presence is his non-deliberation of images. He looks for the right combination and the right moment than the right event. Look at the picture of Himmat Shah and a friend in hills. What makes the picture important is the convergence of the electric lines just behind Himmat in a mysterious fashion. The events within the photographs may be very insignificant but the combinations of volume, light and shadows make the photographs very interesting. This makes him different from many other contemporary photographers who look for events and deliberate a lot on the meanings these images could produce either by contrast or by irony. Raghu Rai seems to be a free bird in the firmament of images; he flies because he, like Jonathan Livingston, the seagull, loves to fly. 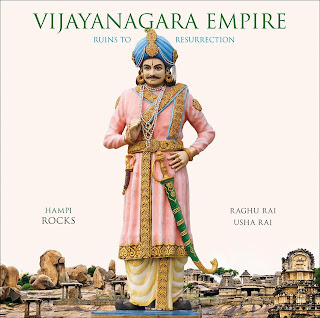 The second book that I read yesterday night has this title ‘Vijayanagara Empire-Ruins to Resurrection’. His former wife Usha Rai writes the text and there is no text written by Raghu Rai other than a few jottings here and there as introduction to certain photographs. This book published by the Niyogi Press, Delhi, by virtue of its subtitle brings a different meaning. Here is a collapsed marriage between the two and now in this book it is resurrected, virtually. Usha Rai is a lucid writer as she used to be a very committed journalist with the Times of India during late 1960s. She knows the purpose of the book and her style oscillates between historiography and tourist brochure writing. However, the writing is sensitive perhaps, she wrote when she was travelling to Hampi with her then husband, Raghu Rai. There are four sections in this book. One delineates the history of the Vijayanagara Empire. Second part is the photographs of the excavated sites during 1960s and 1970s when Raghu Rai used to visit the place regularly. Third is a revisit to the place in the recent years with his digital camera. And the fourth and last part has his fascination for the rock scape of Hampi, which would enthrall any visitor even today. They look like sculptures done by the dexterous sculptor called ‘almighty’. 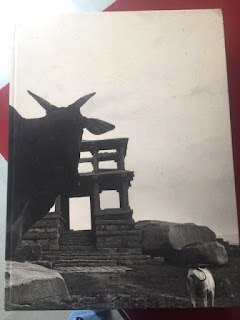 Raghu Rai has always said that he needs an object or a person in order to do the photography. He considers photography as a sort of Indian equivalent, Darshan. That means it is a kind of ‘witnessing’ without purpose. The darshan will instill you with awe, respect and bliss. You cannot differentiate one from the other and that happiness could be inexplicable and beyond any logic. It is as similar as people making darshan of a temple idol, a guru, a saint or even a celebrity. But in Hampi, at the rock scapes, Raghu Rai becomes the worshipper of forms than objects or persons. He may have looked at the rocks as sculptures or objects or Titans frozen in time. He comes closer to the sensitivity of late Prabuddha Dasgupta in these photographs. Prabuddha a lover of abstract forms even on the human body, had travelled to Ladak to photograph the vastness of nature. Even a seashore without any people could give him a different high and he could make pictures out of it. Prabuddha had also visited Hampi and the Ganjam company has brought a beautiful book with his photographs, which surprisingly do not have any text or even a direct reference about the photographer.

After seeing some photographs of certain places, most of us would like to visit those places to experience the aesthetic sublimation that is seen in the photographs. But when I see these photographs I feel that I should never go to Hampi just because I want to preserve the feelings about the place given to me by both Raghu Rai and Prabuddha Dasgupta.