The Irony of Mainstream Patronage for Political Art in India 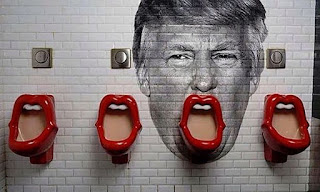 There is no art which is not political. Human beings are fundamentally political animals. Therefore, art created by human beings cannot be nothing but political. When some people particularly qualify themselves as political artists I find it a bit difficult to digest. If it is art, it has to be political nothing else. But most often we do not look at a work of art as a political entity. This happens because we have been trained to look at a work of art in terms of aesthetics. Truth, Soul and Beauty-these are the three aspects that we are taught as the prime qualifications that art should have or that it should evoke. Nobody has told us that it is about the political understanding of the artist who has created the work of art too. It is not taught to us so mainly because politics as not the prime mover of human emotions in the beginning. While beauty, soul and truth moved people or rather they wondered at these as manifested in natural and man-made things, politics was too materialistic a thing which created patterns of rule and subjections in the minds of the people. Politics was result of the organization called society. Hierarchies were the hallmarks of that realm. But in the realm of beauty, truth and soul, there were no hierarchies so to speak.

Hence, when someone speaks of political art or being a political artist, he/she feels that s/he is adding a new dimension which has been shunned so far by art. Hypothetically speaking, the day a social organization called society came in place, the next dawn witnessed the artist from that society doing his work of art with a subtle difference. He was adding one more dimension to his works; his thoughts on the society, his political thoughts. Today, we point out the works of Banksy or the overtly political Ai Wei Wei and say that they are political artists. We also pick and choose the works of Somnath Hore, Chittoprasad and Zainul Abdein and say that they did political art. Going back further wee show the works of the Bengal School artists and say that they did political art in a different way because they were supporting the nationalist cause by rejecting the western norms of art creation. History, with its mechanical methodologies and perspectives has conveniently categorized what is political and what is not political in art. I will not blame because at the outset, history also would do some categorizing efforts before writing critical histories. However, today, it is absolutely fallacious to say that some are political and some others are apolitical in their creativity. What I see is only the degrees of suggestion. Let me explain. 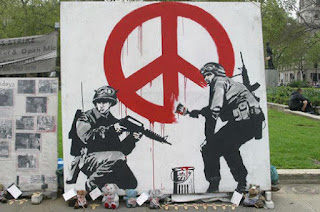 You pick up the picture of Mahatma Gandhi, blacken his tooth with dark paint, you paint some scenes from contemporary or historical uprisings, you express some left wing political ideologies using red colour, you do something interventionist in terms of art, you do a performance and make your political stance on an issue clear- any of these could confer you the title of being a political artist. But an artist who paints the simplicity of nature, the village folk, inconspicuous village or city scapes, river fronts, forests, inconsequential people and so on we say he/she is apolitical or just an artist who makes beautiful pictures. Here the word ‘beautiful’, which is foundational to art, sounds almost as a bad word; an accusation. To put it in different words, if artists are indulged in overtly recognizable socio-political issues both in intelligent and unintelligent ways, with or without giving any respect to form and rhythm which are again the fundamentals of art (making), we call them political artists, while we disparagingly look at those artists who give a lot to create a sense rhythm, harmony and formal cohesiveness but with no overtly recognizable political references. This is the fallacy of our times.

A work of art which is severely political cannot enjoy the mainstream patronage because a political work of art gains its name from being an aesthetical object or idea which goes against the grain of the dominant ideology that rules the society. The dominant ideology protects the rich and powerful and also helps in maintaining all the exploitative systems. If political art is resistive in nature how could it be a part of the dominant system and enjoy the state as well as private patronage? Perhaps, in Indian context at least, I would say this category of calling artists political art or their works political is absolutely wrong because the number of political artists, self proclaimed and otherwise do enjoy dominant ideological patronage. This could happen only in an Orwellian scenario and it is happening in India. Journalists without knowing anything about the art which they are writing about use platitudes like ‘political art/ist’ to qualify certain kinds of art and artists. This has further worsened scenario. Those people who do performance art at times tend to call themselves political; but anything that is done within controlled atmosphere with implications of danger is not called political art but stunt. Such stunts keep happening in places like Khoj International. In our present socio-cultural and political situation of the country, if a real political art comes out that artist will be behind the bars. That is not happening; that means no real political art is happening in this country. Stunt men are not arrested. They are always back patted.

Let me come back to my personal views on political art and why I call all the works of art are political and only the degree difference is palpable. At the outset itself I have made it amply clear that a work of art is produced by a human being and a human being as part of a society has to have political thinking and it would naturally be reflected in the works of art he does. That means, a work of art does not take place in a vacuum. Modernists all over the world tried their best to create the original mood, without being referenced by external sources. Some of them were successful only to become self imitation artists by losing the ability to be original as they are referring to themselves. Some of them including Picasso failed miserably on this front because he too had to go for the unexplored tribal cultures for newer and exciting forms. Yet another lot who insisted that nothing matters in this world other than the harmonies they could conjure in their minds and push their expressions at par with music embarked on a very confusing journey of abstraction. While some of them knew what they did, at present I can be so sure that the majority of the artists who do abstraction do not themselves know where to begin and where to end. Their verbalization on their works are either restricted to form and colour or to some esoteric spirituality. Most often the verbalizing of both the abstract artists and their critics are equally humbug, ‘full of words signifying nothing.’

However, the decision to do abstract art is a political stance. A world that makes too much of sense in concrete forms could be objectionable for some personalities. They retreat to abstraction as a political stance. This is an apolitical stance which in fact is a political declaration; ‘I do not want to make meanings’. But to arrive at that decision one has to have a strong political awareness. Those artists who do landscapes, city scapes, memory drawings and what not, are doing political art because they are functioning from within a society. But to call oneself a political artist, one has to have such conviction. But all those who have such conviction would never say that they are political artists. A simple glace at them would reveal what exactly their art says. If everyone is an artist, then it should also be taken for granted that everyone is a political artist too. But the quality of politics is very important. One has to know what politics is and what is quality politics in art? If someone keeps on painting the faces of beautiful women I will not discount him of his chance for being a pro-woman artist. But then it depends on why he does such art. If he says or at least believes that he does so for the market wants to so then the degree of his politics drains out completely leaving some dregs. Art exposes the artist behind it. 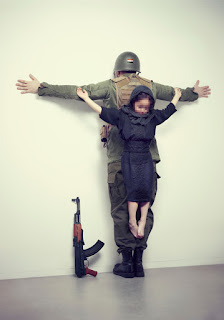 During Italian Renaissance, the mega geniuses of art, culture, science, exploration, architecture, music and so on, operated under the pressure of political intrigues and conspiracies of the Medici family that invested heavily in their creative works. The artists falling in and out of favour of the Medici elders was a common phenomenon and the ire of the masters would have costed the artists of their lives even. So working under them needed a lot political loyalties, strategies and survival plans. One could have been heavily critical of the theocratic state of Italy of that time but as artists they had to find different ways to express their differences with the state; which they did in their works interpolating them with extra-scriptural narratives or scenes from parallel theologies. We live in a world where the political loyalty of artists always stands in doubt. Artists have become much liberated people who need not necessarily be displaying their loyalties in public. However, their works would speak for themselves. However, we see artists who are claiming themselves to be political artists and enjoying state patronage. We see artists vying to become political artists. But I say I real political artist need not either say it or use overt political themes or ideas. If the artist is intensely political and stands for the theory of ‘unto the last’, then his or her work would say it. Rest is bullshit.
Posted by JohnyML at 11:57 AM

i like your the Irony of maimstream patronage political art in the .....

how to progrsive in the contemporary art word