Nefertiti in the South West Coast 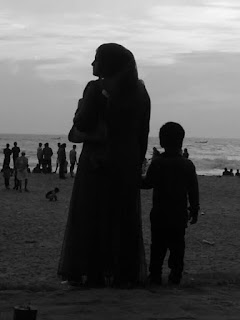 (Photograph by Shibu Natesan. This poem is inspired by this picture)


For centuries I have been standing here

While my sister in the land of pyramids

Made herself eternal inside the tombs

She never looked straight though powerful

I too do not after these many years on this shore

Covered from head to toe with a shame untold

But with eyes opened to the world

Mind opened to the dreams and gardens

Of heaven and the passions of hell

In a silhouette, witnessing the setting suns

They came by ships, with mighty horses

Became one with the land and the language

Creating many like me; we were happy to be.

Later, while the lightness of eternity taking

My sister in the mysterious pyramid tombs

To the world’s great treasure troves for

Scholars and artists to admire and love her

I stood here with no scholarship or knowledge

But only with a vision gifted to me by my eyes

Burning the world before me silently yet

Determined to be submissive to one and all

Letting the world to fight on my body

To decide on whether I cover head to toe

Or completely naked in harems abundant

I stand here, with children running around

And waves lashing against the shores

Neglected and at times wondered at, desired

And discarded quite often till you came and

Clicked this picture and made me eternal

Like my sister in the tombs who has travelled

The world with her side glance and now me too

With you and your brother, to the word, to eternity.
Posted by JohnyML at 11:02 PM