When Fear Makes You Laugh: About Two Shows in Mumbai

Recently I was in Mumbai. I could watch two interesting shows. One, an (art) history based show at the Chhatrapati Shivaji Maharaj Vastu Sangrahalaya, curated by Naman Ahuja titled, India and the World - A History in Nine Stories, and the other one titled 'Sub-Plots Laughing in the Vernacular' at the NGMA (hosted by Sakshi Gallery, Mumbai) curated by Meena Vaari. I thought the show at the Museum was killed by the exhibition design. 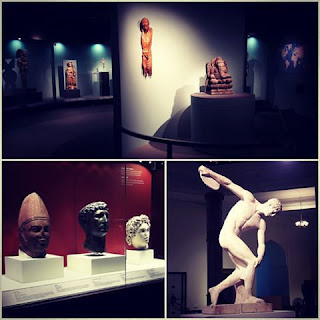 The said show is a collaboration between India and Britain. We know India is currently going through a dark period in its history. Britain too has its bleak moments in these days. I don't know whether it reflects the prevailing socio-political and cultural climates of both the countries or it underlines the beauty of darkness, as the exhibition design has too much of darkness in it and it has literally screwed up the show which has a number of interesting artefacts right from 5000 BC to till date. Each work of art is lit but the gallery remains in pitch darkness. Some garish facades are made at the entry points of each section but of no use as they are shrouded in abysmal darkness.
Exhibition design is one of the core components of any curatorial intervention in which light plays an integral part. Blackness/Darkness in galleries seems to be a postmodern-contemporary critique of the modern white cube(ness) of international gallery-museum format. Countering white with black to position art made by white as well as black artists is an interesting transgression till it has now become a sort of norm even for the local shows. Blackness in itself is a beautiful thing and as it absorbs light automatically highlights the lit objects placed against it; it gives the required contrast. But 'required' is the catch word. How much blackness/darkness is needed to see a work of art? 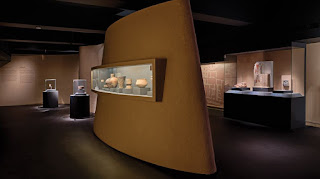 I remember watching a video installation done by the British black artist Steve Mac Queen at the Barbican Centre, London. The video presented the descending into the innards of earth/mines. It was an excruciatingly painful but cathartic experience as the darkness within and without the video was liquid enough to make the viewer feel the intensity of the work. So was witnessing Cornelia Parker's Exploded Home at Tate Modern. But here in CSMVS museum darkness is created for the sake of it; perhaps the unsuspecting visitors from the rural areas of Maharashtra. Seriously speaking, as a curator-exhibition designer myself, I couldn't quite understand the logic behind the employment of blackness/darkness in the whole design. 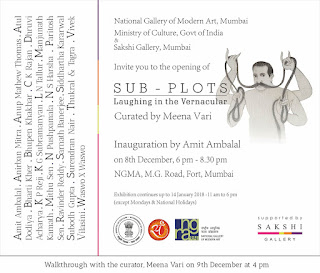 There at the Sakshi show, all the participating artists are familiar. The title set me thinking about it. All the participants are National and international if not mentioned otherwise. You just need to google their name / biodata. The show's title makes them vernacular. Otherwise, their laughter remains national or international. So where exactly is the masquerading taking place, in turning the vernacular into national or national into vernacular? What is this vernacular constituted of? And what is this national constituted by? KGS had answered this question long back when he said the regional is the new international. But I find all the participants have been made into itinerant vernaculars exactly the way they have been made into nationals forcefully by others in other contexts. Participants in this show are my friends. Yet I couldn't help asking this question: what are they laughing at?
Some of them are laughing at the people. Some at themselves. Some are laughing at their own surroundings. Some are definitely obscure. Times are so that I don't find any nudity and laughing at the power centres. Even Harsha's monkeys look very grim. CK Rajan's fan looks pathetically out of context (the dark cynical mad laughter of his works is conveniently sanitised into a flaccid grin here. I ran away from T&T's work. I am unintelligent, dumb and stupid in front of their works. I belong to the Jurassic era of art. Paritosh Sen and KGS are forced in too. Curators do a huge injustice to Amit Ambalal as if he were an artist who is incapable of doing serious art. Amit Ambalal, ready to laugh. Tunty Chauhan with her limited understanding of art history categorised Ambalal in this way. He is still suffering. How can gay theme be a thing to laugh at or a thing that laughs at us? Bhupen is another victim. Manjunath Kamath has been laughing the same boring laughter for the last fifteen years. Tomorrow I wouldn't be surprised if I see a show titled 'vernacular weeping' and wouldn't be shocked at all if I see the same artists in that show. In fact, I don't hold either artists or curator or even gallery responsible for this. It is all about time; we live in fearful times. When fear grips at the nerve centre of thinking we all would laugh from all possible ends. 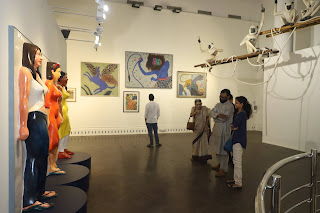 (The curator could have looked at the works of Rajendra Kapse, Farhad Hussain, Raj More, Gopi Krishna, Ratheesh, Sunilal TR, Jyothibasu, Aji VN, G Raghu, Ranbir Kaleka and so on. But not possible because they all belong to other galleries not Sakshi)

(Images have been sourced from the Internet and Facebook)