Da Vinci/Davinchi Suresh: Limitations and Possibilities of a Populist Sculptor 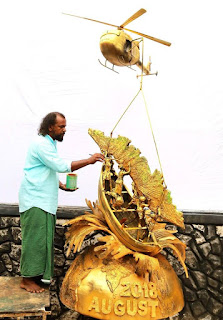 (Davinchi Suresh with his popular sculpture on Flood)

Flood affected Kerala has finally brought its artists out there in the city centres to do some affordable art so that people could buy it for Rs.1000/- to Rs.1500/-, and the money thus raised could go to the Chief Minister’s Relief Fund. Sensing the enthusiasm and the people’s participation in creating affordable art for the ‘flood victims’, the Kerala Lalitha Kala Academy has come forward to conduct similar exercise in all the district headquarters. How such enthusiasm translates into financial aid is yet to be known. But there is one artist in Kerala who responds to social issues immediately than any other artists could even think of it. With quick wit and sharp design sense artist Da Vinci Suresh makes art that often finds headlines and eyeballs, footfalls, viral exchange and of course some money.

Da Vinci Suresh is spelt as Davinchi Suresh, which is typical Malayali spelling and most of those Malayalis who incorporate international names are unapologetic about the spellings that they follow or employ. Media too pick it up with the same flair and verve and it sticks. Malayalis in general, may be because of their high literacy, know who Leonardo Da Vinci was. Hence, the prefix, Davinchi comes as a natural qualification for anyone who is too good at art. Malayalis love superlatives though some hopeless chap in the so called national media call them ‘shameless’. From the safety of the newsrooms anybody could call any ethnicity certain derogatory names. Ignore that ignoramus journalist for the time being. This superlative qualification fits well on the sleeves of Suresh, who hails from Kodungalloor in Thrissur, Kerala. 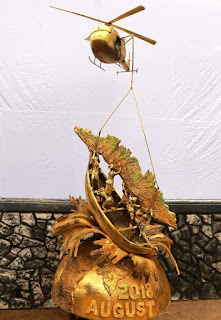 (the sculpture by Davinchi Suresh dedicated to the flood victims)

Davinchi Suresh was the first artist in Kerala to respond to the flood situation. Perhaps, many would have done it in their private studios; or rather they were too shocked to do some art at the harrowing moments of a deluge that levelled the castes, religions and creeds for a few days in the relief camps and shared whatsapp videos. (I should say Avdhesh Bajpai and Avinash Karn were two artists from North India to have responded visually and quickly to the South Indian flood situation). Davinchi Suresh did a sculpture in golden colour with a hemisphere as a base with an inscription August 2018. We are more tuned to hearing 9/11, 23/11 and so on. Hence it should have been 8/18. But Suresh is no Krishnamachari Bose who would fancifully time the KMB 12/12/12. The sculpture is dedicated to the flood victims and the soldiers of all kinds (including the civilian ones) who went into the rescue operation and salvaged a Kerala mauled by the furious claws of water.

The sculpture depicts a boat, a few people in it, the topographical shape of Kerala being propped up on it like rudder and sails, a man giving his back as a footboard for the weaker sex to climb into the boat and up above in the sky an Airforce/Navy Helicopter hovering while rescuing people. It is primarily a symbolic sculpture therefore all what we see are not realistic rendition of events but the rendition of events happened in reality but extracted and made into emblematic of the flood events by the artists. When everything failed the fishermen in Kerala came like Ocean’s Many in their motorboats and rescued thousands of people from the all consuming muddy waters. The Chief Minister of Kerala hailed them as the ‘Army of Kerala’. Some woman was bleeding and a fisherman named Jaison genuflected inside the water exposing his broad back to climb on and it was not just she who did it but many able bodied women too. Jaison came under trolls as well as laurels but for Davinchi Suresh it was something that people of Kerala would never forget therefore an image worth translatable into sculpture. 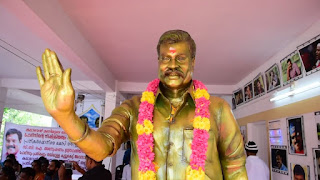 This sculpture by Davinchi Suresh should be called a mediatised sculpture. It is mediatised on two counts. First of all, the images that are sculpturally strewn in the ensemble are already mediatised therefore extremely familiar to the people in Kerala. Secondly, the sculpture itself went viral/mediatised the very moment it was posted in the facebook by the artist himself, which is his usual practice. Davinchi Suresh plays with the obvious and the obvious symbolism that he often chooses for his sculpture makes him a populist sculptor. Populism is a way of playing for the gallery. There are many poets who use familiar imageries in their poetry. There are poets who create an image out of the familiar but a few shades hiding it from over-familiarity. Davinchi Suresh is like the former poets. He has a niche audience that is comprised of the people who watch news for entertainment and take news as entertainment.

Beyond the obvious realism that we see in this sculpture and the kind of popularity that the artist has amassed not only by this sculpture but by his earlier ventures, this work perhaps wouldn’t stay for its artistic merit but it would definitely stay as a populist emblem of the historical flood in the state. One may never know that at some point the Government of Kerala would commission Davinchi Suresh to do a larger sculpture in the same vein at some city square or circle as a permanent artistic reminder of the deluge. But such a government is yet to come in the state; one can always hope for some philosopher-artist-king wielding the reigns of the state government. Davinchi Suresh in a way squanders his genius in things which are obvious. Populist sculptures are like Mickey Mouse sculptures. Everyone knows it and everyone understands it. But it does not worth more than a selfie. But creative sculptures make people delve deep into the nuances of a work of art. Work of art needs some enigma; otherwise it becomes illustration. 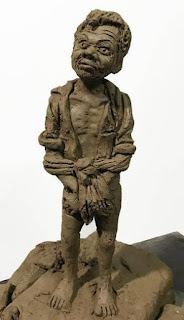 Davinchi Suresh has done it before also. In February 2018, a Adivasi young man was lynched by a literate mob in Kerala. The victim’s name was Madhu and the crime that he did was this; he stole food and the post-mortem reports said that he had only a piece of banana in his intestines. Davinchi Suresh registered his protest by making a one and half feet clay sculpture capturing the fear, anxiety, surprise, perplexity felt by that young man who was dazed by hunger, thrashing and aggressive interrogation by the young men who while beating him up kept taking selfies. This sculpture was not realistic nor was it emblematic. It had a wry realism; no embellishments, no symbolism just that confused expression. That became the enigma and it pushed the sculpture to the realm of art. Perhaps, this was one sculpture that gave rise to many similar sculptures and paintings than the photograph that had been used for modelling the sculpture. Had Kerala had any perceptive museum it would have made the sculpture into museum souvenirs of pain and the state’s high level civility and literacy! 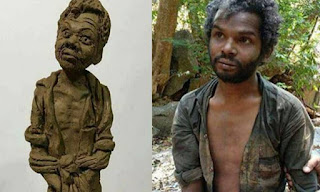 (sculpture and the model by Davinchi Suresh)

This artist has a lot of possibility. What Davinchi Suresh needs is proper direction. He calls his works socially relevant and socially protesting art. In fact, all over the world, these two phrases are in vogue these days. But Suresh wouldn’t find his name in the hall of fame there because what he makes are some populist sculptures. One may see the statue of Kalabhavan Mani, an actor died prematurely, the mobile sculptures of Mohan Lal and a portrait of Mohanlal made out of utensils. Davinchi needs curatorial direction for he has tremendous skill and the power to execute. But his imagination is like that of a calendar artist; one who plays with the sentiments of the people, but not with the real emotions and intellect. Davinchi Suresh is famous but his fame dies with the death of the events that cause his works. Hope he would heed to the views expressed in this article. There may be many to oppose my views for they think that the fame itself is a proof of his artistic genius. But fame is never a proof of artistic genius. Many artists are ‘discovered’ posthumously. Today’s heroes could be tomorrow’s embarrassment. An artist can choose to become a hero but he should be taking very special care NOT to become tomorrow’s embarrassment.