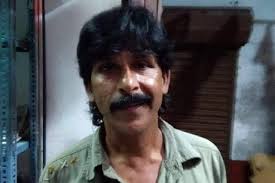 Last year it was Jaisal KP, a fisherman from Malappuram district, Kerala. He had genuflected before the frightened women caught in flood waters and helped them to climb into the rescue boats. The visual of him bending his back had gone viral and had heaped praises for him from all over the world, especially from the Malayali diaspora. This time too, when Kerala reels under the flood waters, there is another hero, Noushad, a small time garment seller from Broadway, Eranakulam. For the beginners, Broadway is a nearly ten feet wide (comparatively narrow) street in Eranakulam which could be called the city’s fashion street. A busy market where people shop for daily provisions as well as for wholesale goods, this street has been referred in many a highly acclaimed literary works. When radio advertisements came in 1980s, Broadway had become a familiar and familial name for most of the Keralites.

Noushad is a good Samaritan who shot into fame with the Kerala flood 0.2 as he made a great gesture of charity by opening his small storehouse of garments and handing over all what he had there to the relief collection team. Shocked by the gesture, the collection team members had videoed him leading them to the storehouse and speaking about his big and significant gesture. What he said in the video could be summarized in the following: It was the days of Id, a holy month for the Muslims. During this month, Islamic believers are expected to give away alms and charity in order to underline the religion’s focus on socialism and equal distribution of wealth, though symbolic in nature. Nousahd said that it was his Holy Day gift and it is his celebration of Id. Many people including the ministers, people’s representatives, rich men, film stars and ordinary people thronged to congratulate him and lauded him for his magnanimous gesture of ‘giving and sharing’ what all he had. He refused to accept monetary compensations from the rich and well to do people saying that he did not needed help but he expected all of them to contribute towards the flood relief activities. One of the populist artists, Suresh ‘Da Vinci’ created an impromptu portrait of Noushad befittingly with the clothes collected from different sources. 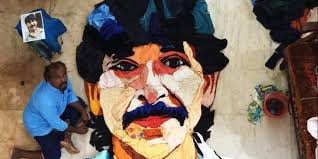 Noushad’s gesture of humanity not only went viral but also it inspired many to make similar contributions but many of them, as expected did not become viral. In an argumentative society, any good or bad deed done there will always be a multitude of views (in Kerala we say that even if someone beats up his mother the public will have two views on it) defending and critiquing the deed. While some people said that similar efforts by the real ‘Christians’ (means someone who believes in doing charity in absolute secrecy) went unnoticed, such flamboyant gestures like Noushad’s got undue recognition and mileage. We could call them sour grape people. But there are cynics still around who go into digging the past, present and future of Noushad and come up saying that the man has been a member of the Communist Party therefore it was natural for him to support the left led government’s cause. Noushad says that he is not goaded by any party politics but the gesture was inspired by God love and human piety.

Good social gestures are always welcome and should be lauded for their goodness itself, nothing more nothing less. Heroes come out of the most unexpected spaces during the hours of crisis and as I written elsewhere, adversities are the touchstone of many to prove their real mettle. Noushad, a hitherto ordinary man, I am sure, once the flood waters are receded would go into his quotidian life and perhaps would come up once in a while as a socio-cultural reference. But many have not taken it for that; for them they want to make a hero out of Noushad, and as we know for sure that it is hugely a sentimental response. Those who want to make Noushad a hero in fact play out a repressed need for becoming a hero themselves. This is a displaced desire that they want to see fulfilled in another human personality or body. This saves them from directly getting into action or doing something that would affect their personal well-being and physical body. They feel elated when they pass the message regarding Noushad in their social media and most of them grab the opportunity to be in the reflected limelight. 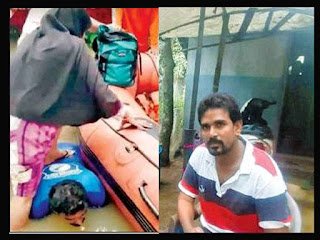 (Jaisal KP during the rescue operations in Kerala flood 2018)

Interestingly, Noushad does not matter for most of the people who share the news. What matters for them is their perennial need to create the binaries; of good and bad. Malayalis have been good at producing binaries for their socio-cultural survival. Even it could be seen reflected in their political thinking. Only in the field of economics that none tries to create this binary of good and bad because money is something that eventually creates good even if the means of producing it could be wrong. Even in the carnivalesque multiplicity that the Malayalis generally hail and stand to protect at any cost there remains an innate wish for binaries; they want to be in an either or OR position. They always want to choose from two than many. Noushad is an easy choice that becomes the embodiment of all virtues and goodness, whereas they could posit the vile politicians and those cynics to the other side of the discourse; the negative/bad side. One may find it is quite logical but let me tell you that in the final analysis there is no logic in making such a binary because there is no absolute good or bad existing in our action for many of our actions are triggered by the effort to survive in the game that we are in; whether it is surviving in the daily life or wriggling out of a legal matter. This is a human instinct; so there is no black and white goodness or badness. All what we could talk about goodness or badness be based on the reach of its effects on a large number of people. If it works for the common good, then definitely it is a virtuous thing to do. On the contrary, if it affects a larger population, however good it is for the doer, it should be termed as bad. That means all gestures are judged by the effect that they produce.

Noushad’s is a commendable gesture because for the time being, in the given context, his gesture does good to a number of people. But if you look at the scale of the tragedy that has befallen on Kerala (now Kerala is one of the states in the Federal Republic of India that has been affected by flood. China, Vietnam and other South East Asian countries are also reeling under adverse climatic disturbances in these days) his is only a contributive gesture which is not different from someone giving a packet of biscuit for the relief camps. So here why Noushad becomes emblematic in his charity act is because of his own economic status as a ‘not so affluent merchant’ and his ability to part with a major portion of his wares which would have brought him a moderate wealth. Once again we go back to the religious dictums that tell us or fix us by saying that the ones who are poor get easy access to the Heaven rather than the rich people who would find it as difficult as getting through a needle hole. This is an imbalanced view and not of welfare ideology at all. It makes the poor to contribute by pricking his conscience while the rich could do adverse things to the nature and cause a huge damage to human beings and property while getting away from the responsibility of committing such things by making moderate contributions in the name of charity. This is what exactly Bill Gates, Melinda Gates, Warren Buffet and all those charity mongers including our own Yusuf Ali do. Held against the Noushad’s gesture of charity, these people gain global traction because of the alleged goodness caused to the world by their charity activities because they reach out to more people. 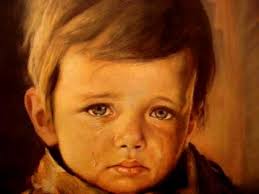 (The poster that Orhan Pamuk refers)

Noushad may be seeking a divine redressal to his personal woes and at the spur of a moment he must have done that charitable gesture of giving away his merchandise. I hope that he wouldn’t regret his act because as a Communist he walks a different path where socialism, which is fundamental to the communist ideology holds hands with religious teachings. This can’t go a long way together. To create a just society, it is imperative to do away with the religious side of charity and work towards a scientific society that would create equal justice and opportunity to all. We need an ideological revolution which is based on science and literature than a deadly combination of religion and politics. Both religion and politics say that the poor should contribute through their noses while the both of them most of the time (even apart from the crises times) keep themselves off from human woes and majorly contribute difficulties to their daily lives. Noushad is an emotional human being. Emotional acts are not always directed by reasonable thinking. Orhan Pamuk in his novel ‘Black Book’ says about the spreading of a picture of a crying European child’s face all over Istanbul or even Turkey in general without any rhyme or reason. Nobody known why they bought it, if they did, because everyone was buying. Noushad did know what he did, but the binary seeking and binary happy Malayalis really don’t know the emotional quotient behind that gesture. Hope they too would do similar gestures without much thinking like the Turks bought the picture of a crying child. This would definitely go out of fashion and its place would be taken over by more effective administrative measure. With the drying coffers amidst a sinking land, the governments must be wondering what an irony it is! The Binary Happy Malayalis celebrate their deeds while back patting themselves but they forget to ask the governments to be more effective and accountable.