Mind the Gap between Hearing and Listening 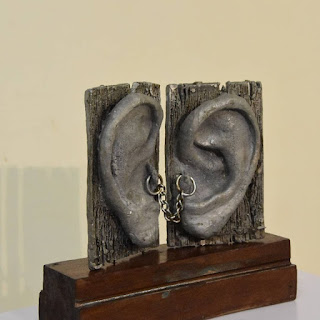 The work is titled ‘Ignorance’. It would have been a simple expression, very student like, had it not been explained in a certain way by the artist herself. Artist, Kauser Jahan is a post graduate student in the fine arts faculty at the Jamia Millia Islamia in Delhi. The work ‘Ignorance’, a pair of ears chained together and fitted on wooden planks, is exhibited in a neighborhood project in the Jamia area which has earned its own notoriety for being a Muslim ghetto; the Muslims live there don’t prefer it to be a ghetto but the political developments in the country has made it into one; the notorious shootout case, the Batla House Shoot out case, has now been made into a Bollywood movie with John Abraham in the lead.

I chanced upon this work of art in a report appeared in the Hindustan Times, a national English daily and Kauser Jahan explains this work saying that ‘hearing and listening are two different things’. Jahan further said that whether it was climate change or atrocities against the minorities the human beings chose to be ignorant about it. This ignorance could come from selective amnesia as put by the socio-linguist, G.N.Devi or it could come from the middle class apathy. People choose to ignore many things because they don’t impact their lives adversely; even if they see atrocious things in the smart phones or in the television screens, they find their safety and comfort in the glassy distance provided by the screens. Accidents always happen to other till it happen to us; immigrants are people who have been evicted from their rightful lands by forces that do not affect us; a land in confinement and the larger seclusion of people from the world could be overlooked because we still live in the illusion of living in a free space. We fail to acknowledge the fact that the space of freedom is rapidly depleting and shrinking. We choose to be ignorant. 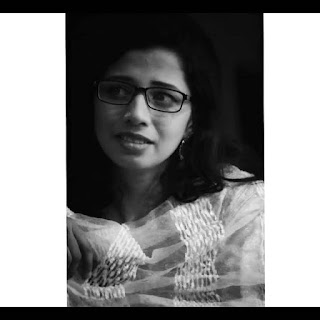 A pair of human ears tied together is not a great metaphor until it is seen in context. We are reminded of the catastrophic statement made by George Orwell in his book, 1984, ‘Ignorance is Strength’. Ignorance gives us some kind of insulation from the happenings in the world. A modernist poet in Kerala said, ‘Light is sorrow, Darkness is comforting’. Knowledge causes pain, oblivion is a refuge. Of course it is a refuge for the people who are pushed into atrocities and unbearable pains. They could overcome the trauma of occurrences by sleeping or by going mad. Each moment of memory is like creating a memorial for the pains that have been endured. But for the people who are put up safely away from calamities, negligence, ignorance and oblivion are a thing of irresponsibility. Jahan in her work seems to pinpoint this issue and we need to hark upon the visual comment made by this artist. She says, hearing is one thing and listening is another. We choose to hear everything and listen nothing. Hearing by one ear and letting it out through the other is a common saying to show the blissful ignorance of the people in general. But Jahan forcefully ties the two acts by one chain. Those who hear should listen too, she seems to say. Rather it is high time that we all listened to the things around.

In the discourse of the Black people and the dispossessed, it is said that ignorance is a strategy by the powerful people through which they annihilate the physical as well as spiritual existence or presence of the other. It is like we share our secrets in the presence of our house slaves and drivers. We expect them to be blind and deaf and definitely mute. This makes them invisible. There is an elephant in the room but we don’t see it, why? Because we are not looking at it or looking for it. It is like overlooking the obvious and pretending that it is not a big deal. We live in absolute cacophony created by news channels and social media. This sonic environment demands intelligent discernment; to separate truth from the dominant falsehood in all kinds of narratives. Hearing has to be attached to listening to make this discerning possible and viable. Our political discourse today needs careful listening than generic hearing and obeying. The work of art in this sense gives out a powerful message. However, Kauser Jahan needs more sophistication in articulating such sensitive issues visually, especially when she attempts a sculptural installation. For the time being the sculpture makes the impact because the times are pregnant with poignant meanings and a sensitive mind would eke out the adequate meaning chaffing out the unnecessary verbal embellishments that could come around it. Till then we need to bridge the gap between hearing and listening.