Fate of Sculptures in the Age of Tourism Economy: Controversial Conches of Kanai 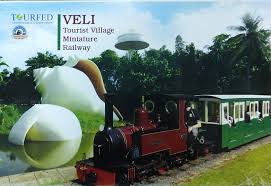 Paint seems to follow Kanai Kunhiraman, with vengeance. The illustrious sculptor who has been instrumental in neutralizing the obscene gaze of an average Malayali on a painted or sculpted female nude, through his enormous depictions of female nudity in the thematic sculptures like Yakshi and Sagarakanya has now become the eye of another cultural storm. This time the trouble has a twin appearance in a couple of kilometers apart; one, at Sanghumukham and the other one at Veli. At the Veli Tourist Village that Kanai had singlehandedly developed out of a marsh-land in 1986, his sculptures, especially the landmark Conches that rest on a tastefully landscaped mound, are in for a makeover with a fresh coat of ‘white paint’. The decision has come unilaterally from the Cultural Department of Kerala that maintains the ‘village’ which has been given an additional attraction recently with a toy train running through the village. 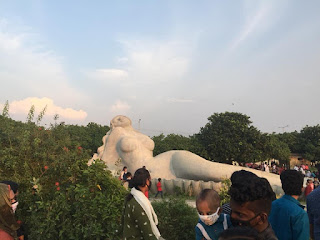 (Sagara Kanyaka by Kanai Kunhiraman at Sanghumukham)
The toy train has already become the talk of the town but Kanai is not amused. He says that he has never been consulted before or after the laying of rails for the chugging toy, which the cultural activists in the city accuse of being laid taking the pandemic lockdown as an effective shield. Perhaps, the toy train could take the excited people all around the village and one of the ‘added’ attractions could be the sculptures of Kanai. So far the department has not taken such a step. Kanai says that the train could have been shifted to an adjoining land without disturbing his sculptures. To make matters worse the makeover issue of the sculptures has come up and in this case too Kanai is not consulted. 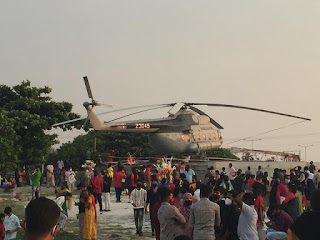 (The Controversial Chopper at Sanghumukham)
It is a norm existing all over the world when it comes to the facelift of cultural monuments. If the artist is alive he/she should be consulted before making any attempt to alter its original state. If the artist is not alive, his estate should be brought into the picture. Still, if such estates don’t exist, the reputed art historians and artists who had worked as contemporaries to the deceased should be asked to make suggestions. Structural engineers and landscape artists and even city planners are to be approached for opinion. Kanai is very much alive and recently his 80th birthday and his ‘Yakshi’s’ 50th birthday were celebrated by the Lalitha Kala Academy. There is nothing wrong to give a fresh coat of paint to the sculpture but the procedure should be done in the presence of the artist himself. 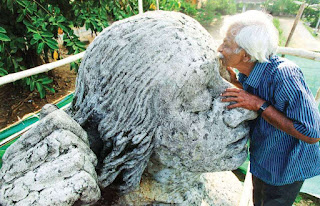 (Kanai cleaning Yakshi at Malampuzha)
In 2018, Kanai’s famous Subhash Chandra Bose, a commemorative sculpture exuding Netaji’s elegance, stature and posture, inviting people into the city of Trivandrum, standing in front of the GV Raja Stadium aka University Stadium at the PMG Junction, was found ‘green’ one day. Someone had painted it green! Kanai himself led the protest and truth came out in the form of a Forward Block leader who thought that Bose was not given enough ‘care’ by the authorities, so he decided to paint it green with emulsion paint overnight! The City Corporation had denied its hand in the makeover and soon experts were called to get Netaji back to his elements. Just a year before the incident Kanai’s another commemorative sculpture of Kumaran Asan, one of the highly influential Kerala Renaissance poets was found sporting a silver coat of paint in yet another ‘reformative’ act. Kanai had to raise voice once again to get the statue back to the initial position as he had conceived it. 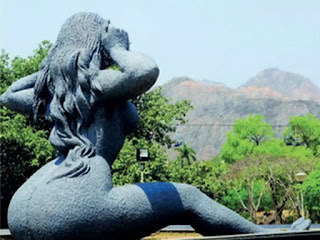 (Yakshi after renovation)
A highly literate state Kerala still lacks in visual literacy. A few decades ago, some precious temple murals were overpainted with enamel color as the ‘conservationists’ thought of making them anew. Same figure, same style but a new approach with new paints, what’s your problem was the kind of argument went around in favor of the act of conservation, which in fact was an irrevocable destruction of a rare heritage. A.Ramachandran who has done decades-long studies in Indian murals in general and Kerala murals in particular was really disappointed as his protestations went unheard by the authorities. In 2013, the ‘Kalapravaham’ sculpture by K.S.Radhakrishnan installed right in the middle of the historical Mananchira Maidan of Kozhikode also fell victim to the enthusiasm of some conservationists who painted it with silver color. A curious photographic intervention by a press photographer alerted the artist as well as the concerned people and what had started off as a conservation act ended up in cleaning the sculpture thoroughly. 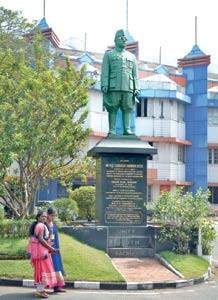 (Subhash Chandra Bose sculpture by Kanai 'accidentally' painted green by a political outfit)
Kanai is a disappointed man today. And his complaints should be heard by the Tourism Department. Any alterations on the sculptures should be done in consultation with the artist who is very much available in the city. If consultation ends up in the objection of the artist, it should be respected. During the celebration of the 50th birth anniversary of Kanai’s Yakshi, it was given a thorough renovation with Kanai himself leading the team in refurbishing its contours with cement and giving it a greyish blue sheen. Many people in fact even disliked the way Kanai himself had renovated it! The Sagarakanyaka sculpture at the Sanghumukham beach and the newly installed decommissioned Air Force Chopper needs further aesthetic deliberation. Managing the damage does not mean the removal of what has been done by the Cultural Department but a renegotiation of the space and its discursive meaning in the public domain. It needs a lot of work from the artists, authorities, intellectuals and the public. I have certain solutions to suggest. And I think I could put them down in another article.
-JohnyML
Posted by JohnyML at 11:37 AM