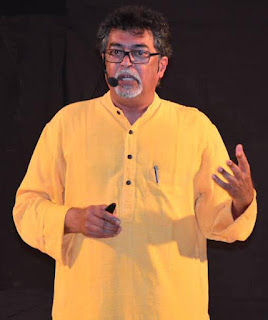 Subodh Kerkar could turn any material into a piece of work of art. He started off with sun and sand, first in water color and then embarked on journey of dealing with the natural elements in real time and space turning anything and everything in and around Goa into ephemeral installations in its truest sense. The origin of installations lies in the innate need of the rebellious artists who moved against the all devouring appetite of the money market that turned art into money and vice versa. Ephemerality was a quality that they sought out in their works and they wanted to see their works decaying like any other organic matter would, in due course of time, denying the markets a chance to monetize or museumize them. 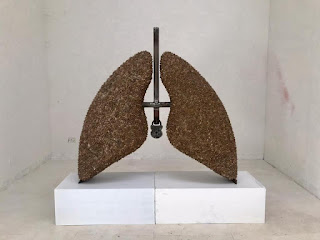 (The Lock Down by Subodh Kerkar)
A quick learner from materials and a quick responder to the ideas Subodh Kerkar makes curatorial overtures with both materials and ideas, tinged with a sort of Goanese madness for life and art. In his hands sand, waves, sunlight, moonlight, electricity, seashells, rubber tyres, tubes and anything and everything become an ensemble of forms, performing in time and space, at times registered as a spectacular event and other times as photographic moments captured in controlled ambience. Museum of Goa is his brainchild and has been doing well ever since its inception, which houses not only the contemporary works of the Goan artists and also a large segment of his own works. 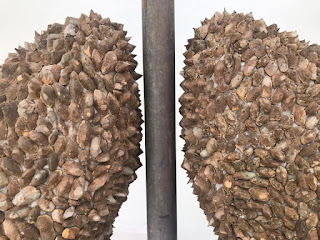 (The Lock Down Detail)
Corona Lockdown days did not let Kerkar down. He has been active in and through short youtube videos, ideating and inspiring, coaxing and cajoling the artists whose morale was considerably down in those days. The latest installation by Subodh Kerkar is titled ‘The Lockdown’ and it has an oversized pair of human lungs as the dominant image. Slightly Hirst-like in his approach Kerkar, as befitting to a medical doctor which is also one of his early incarnations, makes thorny pair of lungs out of fiberglass and is fitted to iron pipes that resemble the organic trachea and the adjoining vessels, whose edge is locked up by a very familiar lock. 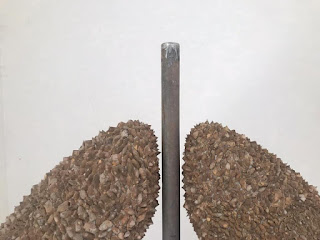 (The Lock Down detail)
The choking imposed by the lockdown days is palpable in this semi-didactic work as the literalness of the image is not hidden by other embellishments than making its surface a bit tricky and precarious by sticking a host of Trifala thorns. The prick of pneumonic bout due to Corona virus and the resultant choking are presented directly through the semi-anatomic imagery. However, the metaphorical meanings would reel out once you look at it in a detailed fashion or rather spend some time contemplating its relevance and endurance as an art work. Corona or no corona (or Go Corona), the environmental pollution caused by our own callous behavior has brought in an asthmatic world wheezing for its life support. If care is not taken, if the erosion of environmental stability is not stopped, especially commenting on it from a state like Goa where rampant mining is not only a political problem but also a socio-cultural issue, sooner than later the sylvan sides of the universe may turn into living hells. 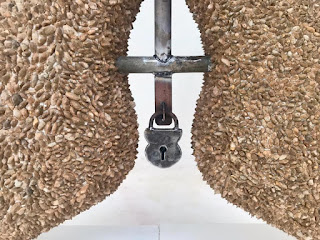 (The Lock Down detail)
The stark imagery that Subodh Kerkar has brought in through this installation makes the viewer wake up and think about his/her own act of sophisticated vandalism of the earth through constant plastic garbage production. There is an alluring tactile quality that is quite common to the sculptures but not of the installations. This allure created by the installation is threateningly fascinating almost reminding the viewers of the sensitivity of the issue that has engulfed the earth, now in the form of a deadly virus and much before in the form of another entity called human beings.
-JohnyML
Posted by JohnyML at 8:43 PM