Story of a Broken Leg 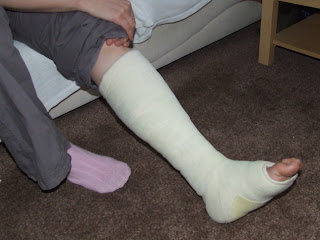 One day she broke her leg. She was just climbing down the stairs, holding her husband’s hand, happily chatting away those little nonsense matters, which her scientist husband always disliked. At the last step she tripped.

While falling, she was still holding her husband’s hand. She was wearing a frilled skirt and that spread around her leg like a flower. She thought, I am a flower, just got dislodged by a strong wind, but still hanging from its stem.

Then she smiled. Her husband hurried to pick her up. Oh slowly, she moaned. With the moan that came out her throat uncontrollably, only she realized that she was injured. But she did not know what exactly was broken in her.

This time, with no nonsense topic to discuss, she limped towards the garden bench next to the pool. Her husband made her to sit there, slowly. She clutched his hands as if he was going to leave her. He too was visibly worried. It shouldn’t have happened at this moment, he thought.

Curious kids who were playing around the pool gathered around her and started asking various questions. Aunty, does it hurt too much? How did you fall? Where is it hurting aunty, should I do something for you?

The last question came from a girl child, may be of ten year old. She was wearing a white frock with a lot of flowers printed on it. Only a girl child can ask such a caring question at this tender age, She thought.

Her husband was making some phone calls while hurrying towards the parking lot. Primarily, he was postponing a meeting with his friend, then he was apologizing to another friend saying that he wouldn’t be coming for the dinner.

He helped her to get into the car. He drove in silence. The stereo was playing some music. Suddenly she felt the music very odd inside the car. Why don’t we talk instead of sitting quietly like this? I am in pain I know. May be the music will help me to forget the pain. May be if he talks to me something that would be better, she thought.

He was not in a mood to talk. He was not insensitive or uncaring. He was really worried. He wanted to get her into some hospital’s emergency ward at the earliest. The traffic was terrible in the city and one needed a lot of patience and concentration to drive. Now he was worried and he needed to be extra conscious about his driving.

She looked outside. Everyday sights; she knew each and every building on the way. She knew the small little alleys that quarreled with the main road and ran into thickets and dirty water. She knew the places where these alleys led. She used to go there quite often to get her materials. Yes, she was an artist.

But now the sights looked different. Seeing things through the thin film of pain makes things different, she thought. She noted it down in her mind. I should be making a work about the pain and the visions induced by pain. The car reached the hospital.

Duty doctor came to her without much ado. He took her case quite casually. May be he sees many like me, middle aged women, with broken legs and hands everyday, she thought. Well, let us get an X-ray done, he said. One girl in light green uniform helped her to sit in a wheel chair and rolled her into the X-ray room. Please go and make the payment, the doctor asked her husband and he walked hurriedly towards the cash counter.

He always hurries, she thought wickedly while the broad door panels closed behind her leaving her hurrying husband out. She was made to sit on a high table. She looked at the swollen ankle of her left foot. Farewell to thee my dear ankle, she told her self. She was finding it really funny. She had a broken bone in her left leg and what did was just thinking about in poetic terms. How absured….ouch…..She felt the real pain now as the technician pulled her leg, carefully though.

Yes, there is a hairline fracture here, pointing at the X-ray with a pen, which was obviously a complimentary one, perhaps given to him by one of those medical representatives who wait patiently at the doors with their bulging leather bags, the doctor said. We need to put a plaster cast. No movements for six weeks.

Six weeks, thought she, that is quite a lot of time. But the rider had not yet come. We need to fix the bone with a steel plate and eight screws. Considering your age, it is very necessary. The steel support will be permanent, said the doctor. Hmm..so it is going to be something serious. Do I see some irritation on my husband’s eyes? No he loves me.

Back home she started contemplating about the steel plate inside her. She examined the X-ray pictures taken on a weekly basis to see the progress of her cure. May be for others they do not make much difference, she thought. But it made difference for her. Suddenly she started loving that one steel plate and eight screws, which were not a part of her body till the last few weeks. Now they had become a part of her.

When her husband went out to the Institute, she found she had a lot time. The maid servant came, did the errands and left. She watched the movies, one after the other; some she liked and some she did not. She refused to pick up phone calls as she started contemplating more on the steel plate and the eight screws in her body.

Slowly she stopped watching movies. Instead, she spent her time in speaking to the broken ankle and the steel plate and the screws inside her left leg. She did some drawings of her leg. Then she removed the image of her leg from her drawings. It looked very abstract. No, they were not abstract images. Soon she realized that she was unconsciously drawing the steel plate and eight screws.

The huge sculptural installation that she did exactly one year after her tripping and falling, received one of the prestigious art awards for that year. It was installed at the city park. The City Mayor inaugurated the sculptural installation and praised her to the skies. Many galleries came forward to sponsor her works and she got several invitations to participate in international biennales.

She is a very successful artist now. But she rarely speaks to people. One day I had a chance to talk to her. While talking to her she asked me, Could you discern the images in my award winning sculpture? I was a novice, a new journalist. I said, No.

One steel plate and eight screws, she said.
Posted by JohnyML at 2:53 PM

Hope to be able to hone my writing skills someday but what can one do about limited imagination!!!