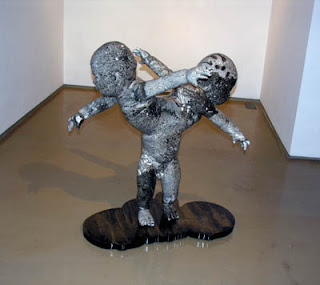 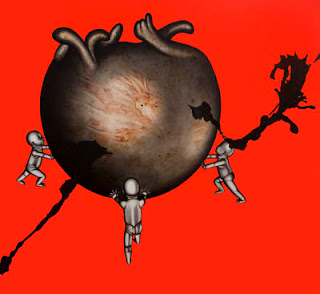 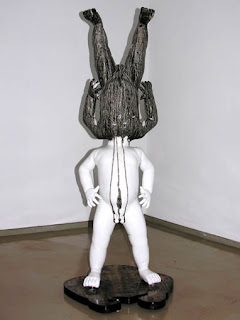 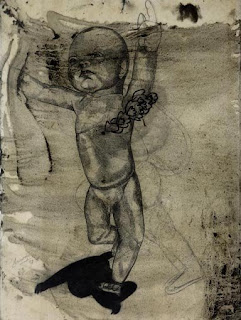 To the lexicon of Indian contemporary art, noted young artist, Chintan Upadhyaya has contributed a new word; Art Toxicism. By the new word, it seems that the artist wants to forward a new idea of making art with highly toxic materials. However, at the same time, there is a palpable artistic intention there as the phrase suggests the possible acceptance of this parlance followed by the acceptance of the art made out of toxic materials. The coinage sounds as tricky as a deliberate trap as the toxic art that Chintan has made would eventually go into acceptable art collections with a conscious coat of non-toxic and durable materials over the toxic materials, rendering them harmless to its surroundings.

Here we have a set of works from Chintan Upadhyay’s ‘factory’ (as he claims himself to be a factory artist) that talks about the unmindful pollution caused by human beings to their surroundings. Chintan finds his metaphor in/from the river Mithi that runs through the city of Mumbai but no longer considered to be a river, but a drain filled with filth and dirt. The title of the project to which these works belong is ‘Khatti Mithi’. There is a word play in it as the word ‘Khatti’ (sourness) connotes the pollution in the Mithi (literally means Sweet) river.

This project opened at the Sakshi Gallery, Mumbai on 20th June 2009 and curated by the artist’s friend and film maker, Anish Aluwaliah, should be seen as an extension of Chintan’s involvement with environment through artistic projects. He has been doing it for the last seven years using an annual site specific art workshop called ‘Sandarbh’ (Context) in rural Rajasthan. In 2007, Chintan did one of his pivotal projects called ‘Tentua Dabaa Do’ (Strangulate) that spoke of the female foeticide and infanticide rampant amongst the Indian populace. Khatti Mithi should be seen as a continuation of his artistic interventions in the social process.

Khatti Mithi has four sculptures with Chintan’s signature style smart alec babies playing the role of protagonists, one large painting, one video (with a title Art Toxicism), six drawings and a diptych panel of small drawings created by underprivileged children living along the shores of the polluted river Mithi. The sculpture ‘Not me Not you’ shows six almost identical baby figures standing in a line of progression, which is suggested by the level of filth on their bodies. The progression towards total filthiness is ironical and suggestively critical in this work. The children are bound to live by the filth and they, in due course get caught or immersed in absolute filth.

The hybrid forms that we see in other sculptures also tell us the plight of people who are forced to live by the dirty waters. The babies (almost an obsessive imagery for Chintan) are metaphorical as they could be anybody who is a victim of pollution. The painting, ‘Let’s Make a Better World’ has three babies supporting a globe like image with unnatural growth from it, and the painting is smeared with a splash of dirt from the river Mithi. Art Toxicism, the video captures ‘moving’ pictures of the river that is in a very sad situation now. The drawings too have baby images but all smeared with the river dirt. The diptych panel is made out of small drawings (auto drawn babies in them), interpolated with graffiti done by children and later dipped and floated in the river Mithi. Wherever Chintan uses the filth from the river, an extra coat of non-toxic material is given in order to make it harmless during the presentation in an aesthetic context.

The Khatti Mithi project has been in Chintan’s mind for a long time. To be precise, he started contemplating on this issue of pollution in 2005 when the river Mithi flooded during the heavy monsoons in Mumbai. For the first time in the contemporary times, people realized that the drain that carried the daily filth of the city was not an open drain but a river. Though several reams of newsprint and several hours of airtime were spent on this issue since then no political or administrative intervention was done for cleaning up the river. Chintan’s project, in this sense, is a pointer towards opening up a process for cleaning and reclaiming the river-ness of the river Mithi.

A project that apparently looks foolproof and perfect, to my eyes, seems to have couple of problems embedded in it. The works presented as a part of the project, even while stand in proximity with the surroundings that caused these works fall into the inescapable trap of aesthetic-ization of terror and trauma of a people. Perhaps, art is helpless when it comes to this aspect. It rebels to yield. Chintan’s project does not stand above it. Had it been a funded one, it could have achieved a sort of critical impermanency, which would have created a much more socially concerned debate around the issue rather than an art project, which could be bought, sold and auctioned. Now, we have a set of sanitized pieces of works in a sanitized interior of a gallery with sanitized people looking at them. I cannot write out its capacity to generate a dialogue as on the very next day of the opening, one of the Tabloids in Mumbai (Mumbai Mirror) ran a full page story on the state of the river Mithi and incorporated Chintan’s exhibition in it.

The second problem that I have here is something moralistic, if that kind of a thing left in the art scene at least for name’s sake. When Chintan did Tentua Dabaa Do in 2007, the majority of the people who came to see it in Jaipur, Rajasthan was from the rural areas. There was a constant stream of people throughout the exhibition, especially women, who wanted to see what a ‘young boy’ had done towards a cause, which they too were fighting with their lives. Here in ‘Khatti Mithi’ project, I hardly found any people from the shores of this particular river, especially those who collaborated with Chintan during the production of the project.

May be one can overlook that factor. But, in one of the press releases I chanced upon (with photographic evidences) a detail that said how Chintan took ‘underprivileged’ children along the polluted river and made them to over-draw his baby drawings. In fact, what do they need to know more about the polluted river as it is their daily experience and they live by that? I wished, the children should have been from the ‘privileged class’ (the art buying and investing class) because the major part of the pollution in any city is caused by this class through their vigorous consumption of things. I found the project slipping into an NGO (non-governmental organization) mind-set in this aspect. The privileged class needs more education than the underprivileged class- that is the basic factor when it comes to any debate on environmental depletion and degradation.

I think this show failed to create the impact of all the efforts and the engagement of the kids. Also the hybrid human forms, i feel are just a way to change/introduce new forms/add to the cliched, signature Chintan's babies. also we all know the plight of Mithi, i think the show did not even manage to start a dialogue - about neither the river or the art. probably because i pass the mithi everyday and i did not find the language strong enough.