New York: The Neo-Empire Films Back 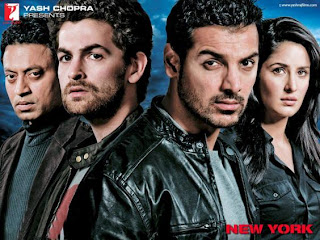 In one sentence the latest Bollywood movie, New York could be defined as follows: About making and breaking a terrorist. Perhaps, ‘New York’ is a movie that tells the world that Indian movie has arrived in the international scene. You may ask why I discount ‘Slumdog Millionaire’ as an international movie despite its multiple Oscar achievements. For me, ‘Slumdog Millionaire’ belongs to that category (like naming Indian girls as Miss World, Miss Universe etc), which is an import of ‘perspectives’ meant for changing our opinion about life, beauty, market, consumerism, politics, culture etc. Slumdog Millionaire was a litmus test conducted by the Western film moguls in the Indian market and it proved that they can coolly invest in Indian films. I strongly believe that A.R.Rahman has done wonderful original music scores before ‘Slumdog’ and Frieda Pinto is not one of the beautiful Indian women. While not discounting ‘Slumdog’s achievements, I would say that the movie was a well placed market ploy.

New York is not a movie about aesthetic marketing. While its story and narration stay deeply rooted in the thriller/action genre, it addresses the ‘global’ issue of terrorism through not much airbrushed relationships between the characters. Interestingly, it is not a cross over film that addresses multi-cultural and cross-cultural issues as in Gurinder Chadda’s ‘Bhajji on the Beach’, ‘Bend it Like Beckham’, or Mira Nair’s ‘Mississipi Masala’, ‘Salaam Bombay’ or films like ‘My Son is a Fanatic’ by Udayan Prakash. New York is a post multi-cultural movie and to be precise it is a ‘global’ movie from an Indian production house, Yash Raj films and directed by a Bollywood director, Kabir Khan.

The issue of global terrorism and its local variants has inspired several film makers in India and elsewhere. We had ‘Bombay’, ‘Mumbai Meri Jaan,’ ‘D’, ‘Wednesday’ and so on. All these films dealt with terrorism as something that affects the locale. The global ramifications of terrorism are treated in these movies as an ‘effect’ rather than as a cause. While Mani Ratnam’s ‘Bombay’ captured the nuances of religious terrorism that affect the common people, Santhosh Sivan’s ‘The Terrorist’ traced how a terrorist is made for political and geographical reasons. In all these movies, we see a set of victims of terrorism and the resultant ideological marginalization of a terrorist’s identity. Religion and terror become a heady mix in these narratives, forcing the audience to think in a secular mode so that the national disintegration could be kept under check.

But New York is not about nations or nationalisms. It is not too apparently about religion and terror. It is a scathing analysis of global hegemony as seen materialized in the form of the United States of America. It also deals with how the ideological and political hegemony can literally ‘produce’ a terrorist out of a law abiding citizen and then use him to track a terrorist and his associates. Fundamentally, the state erases the difference between a law abiding citizen and a potential terrorist. The state can conjure up evidences against a citizen, give him a new identity, use him for ulterior motives and finally breach the trust (both written and unwritten) between the state and the citizen. New York, the movie becomes important as this critique is not coming from the West or America itself but from a country like India. The neo-empire finally speaks back. Isn’t it a welcoming change?

The basic story line of New York is chokingly simple: one girl and two boys (all of Indian origin) in the State University of America doing a course in Architecture. Maya played by Katrina Kaif is the girl and Sameer Sheikh (John Abraham), Ijaaz Omar (Neil Nitin Mukesh) are the boys. Omar silently fantasies that he is in love with Maya, whereas Maya is in love with Sameer. The story starts in 1999 and on 11th September 2001, the twin towers are felled by the terrorists. Omar leaves the city heartbroken and settles elsewhere. He is no longer in touch with Sameer and Maya.

One day Omar is arrested by the FBI for carrying arms and ammunition in his taxi boot. He is detained for questioning. The year is 2008. The Indian born FBI agent Ishaan (played by Irrfan) is in charge of investigation. Omar comes to know how he is set up by the FBI to pin down Sameer, who now runs a construction-maintenance firm and according to FBI, is a terrorist with potential connections. Omar is now on the FBI mission to get Sameer in trap with evidence. Maya and Sameer have been married for seven years and they have a son, Danielle. Omar now enters their house a long lost and just now found dear friend and start his work. Sameer reveals his terrorist’s identity to Omar in a very sensitive moment and explains him how he became a terrorist.

The post 9/11 panic made the administration of the USA to capture innocent citizens only because they have different skin color and religious affiliation and put them through horrendous torturing methods in the detention camps like Guantanamo Bay. Those people who came out of the ordeal either became living corpses or potential terrorists. The administration under George W Bush said that it does not have any intention to detain people. But the truth was different. The government of the USA was literally making terrorists in these camps and later breaking them one by one in order to keep its global hegemony intact.

Omar gets Sameer for the FBI and talks Sameer out of an explosive situation. But the FBI breaches the pact by shooting down Sameer and Maya as if it was trying to erase the evidences of their lives. Omar lives to tell us the tale and also to take care of the orphaned son of Sameer-Maya couple. Ishaan repeatedly tells a rebelling Omar that the state eventually takes care of the law abiding citizen citing the example of the orphaned Danielle.

That is where the film maker confirms with the government of the USA. All the religious minorities or racial minorities need not be treated as criminals or terrorists. To underline the point, the director makes the statement in writing that Barak Obama has abolished the detention camps like Guantanamo Bay. Hence, New York is a critique on the inhumane administrative style adopted by George W Bush. Also it is an expression of India’s sentiments towards Obama administration. However, the hegemonic state speaks through a character like Ishaan, who vouches on his religious bend and his conformity with the state. A film can pinpoint such nuances but in real life as well as in reel life there is no solution for such situations. As I mentioned before, this movie is about making a terrorist and breaking him/her and in due course destroying several innocent lives. Khuda ke Liye was an example from Pakistan. New York is a thrilling rejoinder to it from India.

To rate the artists, it is purely a Neil Nitin Mukesh movie. He has proved his histrionic abilities once again after his debut movie, Johnnie Gaddar. John Abraham is the usual hunk but he needs to be free from his body to prove his acting talents. However, he has done his role well in New York. Katrina Kaif is refreshing though the accent and the ‘upwardly mobile’ upper lip feel too much at times. Irrfan is a unique actor. His dialogue delivery should be a lesson for both Neil and John. Even the smallest syllables in the fastest dialogues of Irrfan are audible, while both Neil and John fumble during such dialogues or lose the tone and timbre of their voices which otherwise sound good.
Posted by JohnyML at 3:05 PM

hi johny it is very well written. you should be a film critic for papers like hindu or times. i think it is high time people get more then just rateing a film. the examination of the context and subjectivity is really good. keep it up. chintan