Delhi Remembers M.F.Husain: Does it Strongly? 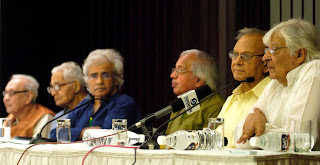 At the gate of the new wing of the India International Centre, New Delhi, I meet a uniformed guard with a pleasant smile. He does know that there is something important going on inside. He understands that the bearded old man in the picture pasted on the glass wall of the entrance is someone who is very important. While stubbing out my cigarette I ask him whether the program has started. He tells me that a lot of people have already gone inside but he could not see the ‘old man’ in the portrait. “He must be someone very important,” he tells partly to himself and partly to me. I look at his innocent face and his innocent smile flashed well between his lips.

“Yaani …vo abhi nahin rahe,” he says (That means he is no more).

“Haan….,” I make sure that the cigarette is out of sight. I don’t want to see myself littering the place though I could not see any dust bin around. May be the people who generally come to the India International Centre do not litter the place; they litter only minds.

“Shaayad..mein inke bare mein suna hai (perhaps, I have heard about this man),” the guard tells me and I could see that he was sincere and he did know who Husain was. It was just a temporary lapse of memory for him. He could not connect with what he knows and what he does. He was just guarding the gate of the new wing of the India International Centre. He does not know where he would be posted tomorrow morning.

M.F.Husain too was like that. He did not know where he would be on the next morning. In the documentary which I would see later on inside the hall has an interview with M.F.Husain in which the departed artist says, “For the last forty years I have never stayed in one place. I am always on the move. I paint from places where I find myself.”

Dear readers, you might have noticed one thing. I have not written a word about M.F.Husain after he departed. Even now I resist myself from doing that. I am just reporting what I saw, heard and understood yesterday. 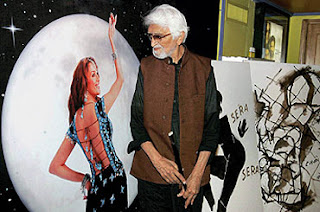 Date- 17th June 2011. Location- (for those who move the cursor fast) the new wing of the India International Center, New Delhi. The hall where the condolence meeting or rather the day of remembering takes place is called ‘multi-purpose auditorium'.

When I go inside, the hall is full. Despite an unexpected pre-monsoon shower, people have turned up in strong numbers. Perhaps, I am one of the last to enter the hall and I get a space behind the television camera men; destiny, I tell myself. Journalists get the last row always.

On stage I see (from left) Syed Hyder Raza in a wheel chair, in his characteristic kurta and jacket. Next to him is Ram Kumar; an older version of the protagonists of his paintings from 1960s. Then you have Vivan Sundaram, surprisingly looking several years older (almost like chancing upon Shashi Kapoor without make up), then Ashok Vajpayee, Chairman, Lalit Kala Akademy, in his charismatic and semi-nationalistic and ethnic Fab India attire. Then Bikram Singh, author, director and cultural connoisseur in his common man’s clothes (Surinder Paajee’s clothes in Rab Ne Bana di Jodi). Next to him is the aristocratically aged Krishen Khanna in his white linen kurta with embroidered patterns around the collar and shoulder, bit retro in fashion (classic has a retro charm always). Extreme right we have an extreme left person curiously now mellowed down, that is Gulam Mohammed Sheikh in his formal dress.

Then I see a sea of heads, with gracefully aging hairs and bald patches, and arrogantly wielded wigs and dyes. I could make each and everyone from their behind. Spending too much of time with art and artists make you so aware of their presence that you would be able to tell who is who even from their shadows. Manisha Gera Baswani has played this trick in her photographs also.

I count them and then lose count, perhaps interest too. I notice a lot of erstwhile detractors of Husain in the crowd. When father dies we know that it is time for his revival and consecration because when he was alive we have desecrated him enough. We have this oedipal problem. Now we are sure Husain would not come to our lives from the grave. 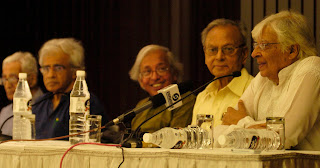 I could not listen to what Ashok Vajpayee said as I enter the hall a bit late. But soon I could make out that he has set the tone of the day of remembering M.F.Husain. He might have spoken in Hindi because when Ram Kumar’s turn comes he pulls out a paper from his pocket and reads out small anecdotes about Husain’s life, in Hindi. Raza does the same. But he peps it up with French and English. Krishna Khanna also speaks in Hindi. So when it comes to Gulam Mohammed Sheikh, he prefers to speak in Hindi and he speaks in chaste Hindi. He remembers how Husain graced the youngsters of his time with his presence and support.

Bikram Singh speaks in English. Unlike the artists who have remembered Husain fondly, playfully and nostalgically, Bikram Singh shows his agitation. Perhaps, most of the young people in the audience must have been waiting for this angst and agitation to come out through any one of these speakers. Bikram Singh, with a lot of courage and verve criticizes the UPA governments (two terms) for not showing political will to bring back Husain in India and give him adequate protection. He mentions his own and Vivan’s efforts to meet the concerned ministers to gather support for Husain. His agitation is worthy and deep. Bikram Singh concludes his speech by saying that the death anniversaries of M.F.Husain should be celebrated as the ‘Freedom of Expression Day’. 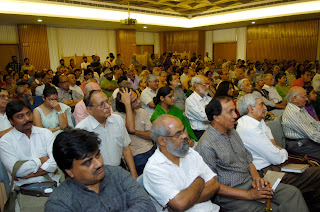 ‘Freedom of Expression Day’, though a bit clichéd phrase in the current cultural scenario, when Bikram Singh says it he means it and the audience gets the feel of it. They clap. Vivan Sundaram speaks of his experience with Husain and his life. He approaches it a bit art historically by citing the works that he had done in 1970s and later throws a question why Husain deviated from that complex practice of ideation through visual art and opted for simpler forms and styles. He closes his speech by reading out a paragraph written by his wife and art historian, Geeta Kapur. Vivan too speaks in English. 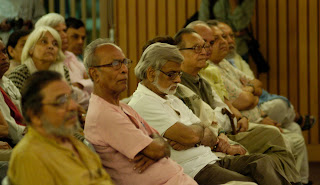 This session puts this doubt in you. Why, why the artists, the stalwarts who were present on the podium did not raise a word against the government's apathetic attitude towards Husain and the issue of Husain the way Bikram Singh had done. Are they afraid of someone? Are they afraid of closed circuit television cameras and IB men in plain clothes sitting hidden amongst the audience? Why none of them did not commit a word of protest against the government?

I am sure Bikram Singh does not have much to lose. Or he believes in what Edward Alby had said long back: Someone should be a scapegoat, when none is there.
Posted by JohnyML at 6:57 PM

Yes..true…must b afraid or wants to be on a safer plane….coz I have personally come across some of these stalwarts who admits that they wants to be diplomatic.

Although I enjoyed some of the stories of Husain narrated by Gulam m Sheikh and Ram Kumar...bt our duty is limited to mere stories...coz it’s not just a history…..it’s not just over...

people have been speaking about the issue and i feel country is poised to practice its right to dissent,...hussain's exile though would remain a dark history in the era when RTI Act, right to dissent and freedom of expression would no longer be an alien term to underprivileged or weaker sections of the society.

thanx johney for wirtten this beautiful text.
question has to be raised now .even.

This is one of best articles I read after Husain's death.

One I read from Mr. K. Bikram Singh in his fortnightly column in Hindustan (Hindi).

Very well written and thanks a lot to refresh my memory regarding Husain Sahib.