Four Friends and a Lion- Retold from Panchtantra. 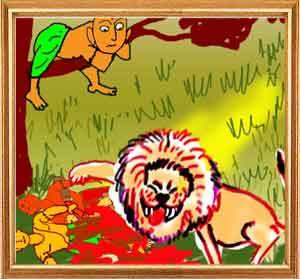 Once upon a time, in a village there lived four young friends. All of them were extremely intelligent. One had a special power to put things together logically. Second one was adept in beautifying things. The third one was magical enough to infuse life into dead things and the fourth one did not have any of these capacities, but he was wise.

One day, they decided to go out and see the world. First and second friends said that the fourth one would be a burden as he did not have any special powers. However, the third one insisted that as the fourth was their friend they should take him along.

Together the four friends set out one fine morning for their life turning journey. They entered a forest. There they saw the skeleton of a lion lying scattered. The first one decided to put them together and he did do that.

The second one, led by inspiration added muscles, flesh, skin and mane to the lion. Lo, a ferocious lion was lying there, but dead.

The third one stepped forward to display his skill. But before that the fourth one tried to prevent him from that. He warned them of the possible dangers. Shooing him aside, the third friend started working on his spells. By the time, the fourth one ran to a tall tree and climbed to a safer branch.

Horrified, the fourth friend watched all these from the high branch. Once the lion left the place, he climbed down from the tree, ran back to the safety of his village.
Posted by JohnyML at 7:36 AM