A Book Forever for All: Swapan Seth and His Book 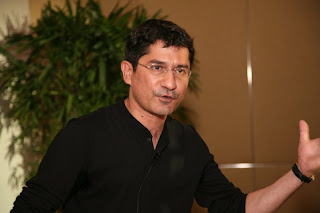 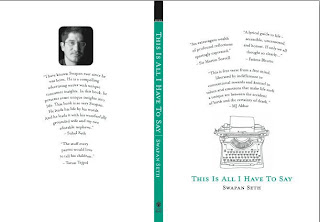 (This is All I Have to Say by Swapan Seth,Cover)

If you haven’t yet, go and grab it today itself. Yes, I am talking about a book written by Swapan Seth, an advertising professional, entrepreneur, curiosity teacher, art collector and collector of memories.

Where could I place Swapan Seth’s first book TAIHS (these are the times of abbreviation in everything) amongst the varied genres of books? It is not a self-help book or the chicken soup book. Nor is it a book of maxims or haiku poems. This is not a book of philosophy capsuled for instant gratification. It is not an autobiography written in free verse. It is not a book extracted out of sermon delivered on a mountain top. This book is not about how to become successful in life.

Then what is it about? This book is about how to fail in life and how to face crisis in life. But then I am simplifying an already simple book with deeply touching ideas. I don’t want to do that. Let me rephrase it in this way:

This is a book written to oneself knowing that that one is someone as clear as a drop of water on a leaf tip on a cold morning that could reflect the whole world minutely in its shiny curvature, but at the same time as insignificant as an insect (yes, I used the word insignificant) that could see that micro world reflected on the dew drop sitting next to it on the same leaf on the same cold morning.

Do I make any sense? May be. Yes, that’s what exactly Swapan Seth says in his book; Ambition has all answers and aspiration has only some questions. While Ambition says I can, aspiration says, May I? In aspiration you become a good human being.

Swapan Seth, a college drop-out but a successful ad man from the very early age of 22 and an entrepreneur by the age of 28, has a touch of Midas; but with a touch of discretion. In this book, he rewinds his life, I could listen to the humming sounds of the tape, and extracts certain things that have influenced him as a human being and recounts them for, I am sure, his children, Reyhaan and Sirhaan.

And when we read this book, we all become his children. That is the good thing with the authors. They could become fathers to their readers. And readers don’t feel offended at all to become the virtual children of an influential author.

Let me go through the topics quickly for your consideration. On Love: Most people tuck their love away in their hearts. Wear yours on the sleeves. (I am trying to write everything from my memory). On Failure: Unknown to many people, success and failure are thick as thieves. If you deal badly with failure, success will never see you.

The topics range from success to relationships to friendship to marriage to life and death. They are gems like sayings, not said by a Guru, but by an ad man. But aren’t the ad men the best Gurus who know the pulse of the people and know the ways to increase its rate too?

‘We Also Make Steel’- this was the line that declared Swapan Seth’s arrival in the ad scene way back in 1990, when he wrote it for the TATA Steel. Awards and accolades followed; yes only followed. Swapan Seth did not allow them to over take him and his sense of balance.

Now I quote: It takes hard work to become successful. Not hard cash. I see so many failed fables masquerading as success stories. Remember, there is only one way to find out whether you are successful or not. Go to a mirror.

I love these lines because I do go to my mirror everyday just check out whether my private ghosts are still buried safe on the landscape of my face. I could see success also at times showing its shovel at me shadowed by the spectre of death.

This is one book I could open once in a while just to feel good and check my goodness quotient.

Swapan is not Francis Bacon. But they have something similar in them. I am talking about the sixteenth century British philosopher.

Now, a few words about my personal relationship with Swapan Seth. I did not know him till mid August 2009. For the panel discussion conducted during the grand finale of Video Wednesdays curated by me, Swapan was invited as one of the panellists as he is known to have collected video art in India. 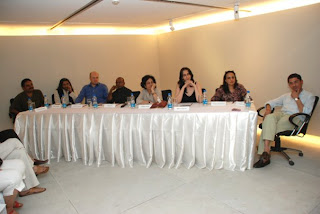 I was looking for a ‘collector’ with pomposity and an artificial halo. But I found a man, in a white shirt, beige colour trousers and leather sandals, sitting a bit away from the other panellists. When he spoke on collecting video art in India or elsewhere he was humble but assertive on his stance.

I thought he was older than me and later found out that he was just one year senior to me. Then he became a very popular name amongst the art people because he started collecting quite eclectic cutting edge works from different galleries. He promoted Suchitra Gahlot from the Shrine Empire Gallery and Kartik Sood from the Latitude 28.

Like love, when he has these works, he wants to flaunt it too, not for the sake of his glory but for the love for his artists. Facebook is a place where he flaunts his achievements with rigor, vigour and a sense of purpose. Everyday an new thing and share it, that’s his motto.

Then in August 2010, exactly after a year since our first meeting, Swapan curated ‘Scratch’, a purely cutting edge show with the Sakshi Gallery on the Second floor of the Lalit Kala Akademy and on the same day Anubhav Nath and myself curated ‘Freedom to March’ on the first floor of the same gallery. (In 2011 August I am writing about him and his book. Karmic chains)

On the show eve, tired by display, Swapan came down from the second floor and bumped into me. “May be never again,” he said to me and smiled. “May be for you this must be quite easy,” he added. He was ready to accept me as a more experienced curator than himself.

Since 2009, I have been following Swapan Seth through his Facebook activities. There are some people who capture your attention for no reason. I liked Swapan just like that. I saw his pictures and his family’s pictures in different places, enjoying good and soothing holidays. I liked them, two grown up boys and one beautiful wife. The family looks quite contented.

On their tenth anniversary, Swapan’s wife left a note of love on a napkin. To his surprise Swapan found out that it was a napkin from the same hotel where they spent their honeymoon days ten years back. He was touched by it.

Some people are like that. They are touched by the simplest of things in life. And when they speak about them you feel that you already knew about them but the way they tell it makes all the difference.

This is all I have to say. So go and grab a copy today itself.
Posted by JohnyML at 8:28 AM