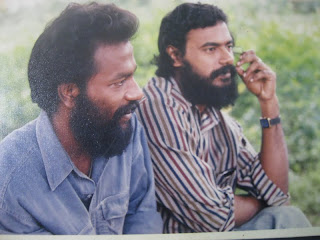 The incidents and characters described here are fictitious. If they have any resemblance with any dead or living people, it is just a coincidence. The author would not be responsible if anyone feels that the caricature is about him or her.

Any migrant in a city, if he is looking for a job would wear decent clothes, sport a proper hair cut, flaunt a shaven and shiny face and show a kind of eagerness to be friendly with everyone and everything.

But if he is supposed to become an art critic, he can be just the opposite. Note the point: Indian art scene of late 1980s and early 1990s demanded art critics who looked existential and burdened with angst. He should not wear clean clothes, should not cut his hair, should definitely sport a beard and should be unfriendly to all.

As you are supposed to be an art critic, you should be critical of everything. And burn your anger and opposition by chain smoking cheap beedis. I have seen young art critics moving around with tucked in sweaters during winter, just like labourers working in construction sites. Tucked in sweaters were not in fashion those days. But it was the only way to keep the frayed and tattered ends of the wear away from the public view. 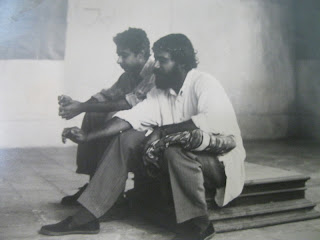 Dirty shoes were a must. A bag full of books, a cotton kurta and a pair of specs would have completed your image as an art critic. Other people who struggled to make the ends meet really envied you at that time because they thought you had all the time in the world in your hands. In fact, you really did not have any work to do so you thought you were on a permanent holiday.

I realized the potential of this dirty dress code when I gate crashed in an opening at the Art Today Gallery at Connaught Place in 1995. Some television guys were there with their cameras and lights. Even Delhi had not undergone the channels revolution at that time. Doordarshan still held respect amongst the people. So naturally the television guys in the gallery were from Doordarshan.

Page Three culture had not started yet, though it was there for the movers and shakers. But what was there in India to move and shake during early 1990s? Population was on the rise.

These guys came to me and asked whether I could ‘act’ like a serious art lover? I told them, I need not act because I was a serious art lover, to which they smiled as if they had not heard any joke like that before in their lives. I stood for them in front of a painting, in my Khadi kurta and jhola (cloth bag from Janpath). The camera whirred, lights flashed and I acted for them and ‘lived’ for myself.

What makes me feel good about that incident is this; I am still there. Art Today Gallery is not. Both the parties have undergone radical image changes.

The more, the merrier was the motto- I am talking about facial hairs. All the art critics sported beards. Those critics with party affiliation and farmer connections trimmed them occasionally. And art critics spoke through their beards, but unlike the present day clean shaven critics, they had made a lot of sense when they talked. Occasionally it reached the level of sloganeering. But then art critics were human beings too. 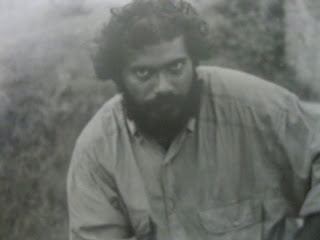 (JohnyML at some field in the outskirts of Baroda, 1993. Original picture by Shibu Natesan)

Some art critics, when they got government jobs, reduced the amount of facial hairs only to go clean as they moved up in hierarchy. Tucked-in sweaters were replaced by shiny three-piece suits.

When I was still sporting a long beard, a journalist friend once asked me with a lot of obscene glimmer in his eyes: If you have this much in showroom window, what would be the kind of stock you have in godown?

Male art critics have always been a minority in Delhi. Art criticism was ruled by woman critics. When Delhi could get a few more men as art critics, they became so politically correct and balanced that they all started sounding like half man and half woman. Still we think that when you grope a girl it is molesting and when a gay gropes you it is ‘their’ right.

Forget all those things. India’s two acknowledged ‘gay’ artists and ideologues, Ram Rahman and Sunil Gupta do not wear their alternative sexual identity on their sleeves. When they speak they speak like human beings. 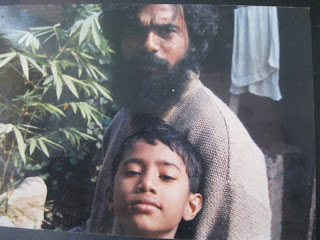 (JohnyML and in his lap Sibi Abhimanue, singer and artist, 1995. Original picture by Abhimanue VG)

To be a radical art critic, as time went on and changes started seeing in the Delhi scene, you had to squat before a work of art. If you don’t squat along with a girl who has to tell the world that she too has a pair of eyes by outlining it heavily with kohl (kajal), you are not a serious art critic. Compromised and confirmed art critics stood and watched art, especially video art, alternative and radical critics squatted on their hunches and watched. They stood only at the free bars and after some time they ‘snaked’ back to their homes.

In seminars these male art critics sit in the front row, on the floor, even if seats are vacant. They lean against the wall and sleep, no listen. The moment the speaker concludes his paper, these critics raise their hands automatically. And they don’t ask anything particular. They even say that they raised their hands to scratch their arm pits.

You know why, still male critics are a minority in Delhi? I have an answer. It is not because of the view that traditionally women are good at art, art management or art writing because they don’t not have much to do in the public domain but because of the fact that the male art critic think that they have so many things to do in this field therefore they need to take time and do it cautiously.

In essence they don’t do much. They spent innumerable hours in libraries, canteens, hostel rooms, birthday parties, protest centres, seminar halls, selected art openings and so on. They want to be super heroes and existential dumps at the same time. So they post their night revelry pictures in facebook and feel good about it.

I am not exaggerating. Look at the art magazines. Most of the writers are women because they want to work and express themselves. 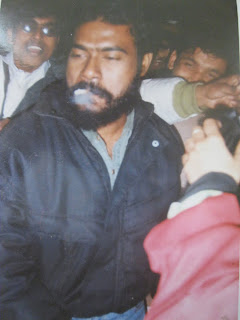 (On the way to a resort in Haryana with the students of College of Art 1995. Picture by Puja Puri)

Young male art critics in Delhi live in illusion. They live in places like JNU, FICA, Vadehra’s open terrace and so on. They contribute crowd to seminars, openings at the Devi Art Foundation, FICA discussions, Khoj programs, and to such places where anything is considered to terribly alternative but covertly conformist.

Most of them wait for a pucca job to come on their way. Guys, young male art critics...start writing and start involving yourself.

As once Prabhakaran, the artist said, ‘write, write as many as thesis..They all will come back to you during Diwali.’ What he meant was this; Your thesis will be hawked off and they will be bought by the cracker industries at Sivakasi. During Diwali days, your thesis will explode in many colours all over India because crackers are covered with your papers.

Guys, we need a different art criticism. Work towards it through writing and engaging the scene positively.

Let me remain a caricature of my own self and many other selves.