Caricature Series- The Evolution of a Woman Art Critic in Delhi 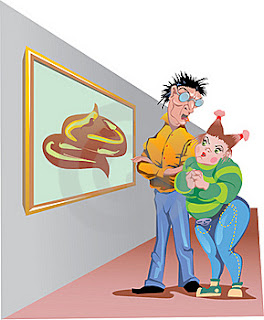 She is the quintessential art lover- the woman art critic in Delhi. She is not one. She is many. She is many because she has so much of time in her. She has good command over English and a lot of vacant time in her life. The children are grown up or they are in their primary school so motherly duties are becoming less tasking. Husband earns well so there are no worries at the home front.

It is pre-mobile and pre-internet and pre-post-modern and pre-contemporary and pre-globalization time. As you know in those days, things were either black or white. Either you were rich or poor. Either you were married or unmarried. Either you had a happy family or an unhappy family. You had a happy family then because you did not have the devices to check the gallivanting nature of your spouse through checking their private mails or chat boxes or mobile phone data storage. As we were still living in the golden era of economic protectionism, we had only KGB or RAW to blame on if anything went wrong in the political side. In general we were happy in and with our limitations.

When you don’t have much to worry at the home front as the maids are taking care of the upkeep of the household or even the look of it, by running a well oiled machine called kitchen, you feel that you have ample amount of time. You don’t worry about the extra-marital exercises of your husband because you don’t anything about that. You simply believe that the ‘woh’ does not exist between god fearing and respectable middle class Pati and patni. Hinudstan Times and Times of India were not bringing out supplements to tell you could use your sexual hormones charged up even when you prepare for your platinum jubilee.

Suddenly, with so much of time in hand the writer in the woman raises her head and prods her to do something with her vacant time. She just does not jump into writing. Instead, she goes to the most fashionable places in the city, purchase a lot of decorative stuff that would make her house look like an antique shop. She banishes the furniture from the drawing room and in their place she puts durries, cushions and hand printed clothes. She calls the electricians to remove all the existing light fittings and places a series of corner lights that would give a subdued orange sheen to everything inside the room. Then she shoves away all those ABBA, Boney M, Michael Jackson cassettes collected by her kids into some attic and replace the racks with cassettes of all Hindustani music and old Talat Mahmood records.

Then she removes all those souvenirs that she had been collecting since her honeymoon days, all those kitsch, from the showcases and walls and replace them with something modern, which she or her husband or kids understand. The maids would ask, ‘what’s that, madam.” Then she would say, “you don’t understand.”

One day, after giving a complete image makeover to her home, she takes a serious look at herself in the mirror. And then and there she starts hating herself. What is she wearing? All those synthetic clothes from Lajpat Nagar and Connaught Place. She rushes out to the nearest Khadi Gramodyog Bhavan or rare Fab India outlet. After a few days she comes out as if she were a butterfly till date confined into the cocoon of domestic life. While placing a big bindi on her forehead, she asks the writer inside her, “Are you happy now?” She would frown and would say, “I am okay with this looks, but what about me? My desire to write...”

There is a conflict in place now. The writer, who had done English Literature from a reputed college in the city, has been lying low for the last ten years and now she wants to come out with a roar. But what is there to roar at? India is a country with ample amount of poverty and it keeps the journalists going as there is no dearth of topics. So what about poverty? But it does not have any class, tells the writer inside her. So she pours herself over so many topics and finally reaches a Eureka moment.

Music. Wow. But what do I know about music? She asks herself. Then the friend comes to the picture. “Arre...you have gone to all those concerts with your husband, you have heard all those musicians singing and dancers dancing. Just write. Read bit add the names of Gharanas and styles. Done. I assure you your things get published.” Armed with a friendly assurance she goes out that evening for one of the concerts, this time without her husband, and comes back and writes a piece, which she herself finds strange and non-sense.

But it gets published. As many women are not blessed with so much of free time and an inclination to write than attending kitty parties, she is asked to write again on the topic. So she writes and one day people recognize her as a music critic. Now she starts getting invitations at her home. Some even promise sending cars to attend concerts and recitals. Some hotelier befriends her and tells, “how wonderfully you write on dance and music. I am a fan. Why don’t you write about food too. That is the happening thing.” She cannot say no. So next week onwards we see her food columns in some magazines. The Swagat, the in-flight magazine of Air India asks her to cover anything that would catch the attention of someone who could fly at that time.

Her reputation grows as her bodily fat too grows. The impoverished looks give way to wads of fat in and around her. Then one day she becomes existential. How long would I continue like this? She reads Samuel Becket’s ‘Waiting for Godot’ one day to attend the Hindi version of it at the Kamani Auditorium in Delhi. She comes back with a feeling that ‘none comes, none goes, nothing happens, it is awful.’

She spends sleepless nights and finally consults her friend who is always in need indeed. “Don’t worry darling. Middle aged women are a craze amongst the visual artists. Why don’t you try to do some art criticism?” she says. “Me and art criticism? What do I know about art?” she would counter. “Oh..come on baby, while sucking out the last drop of coffee concoction from the white cup at the Indian Coffee House on the top of the Regal Building in Connaught Place she would say, “Come on baby, don’t be so disheartened. Your Dad was a friend of Ram (Kumar), Krishen (Khanna) and many others.” “But I hated artists all the time because they were lecherous.” “No, that is not the case. The art is important. Use the sources baby. Cover art exhibitions. Now that is the happening thing.”

This boosts up her sagging morale. She looks at her mirror. Today’s forty is the new twenty. A few appendages would help me to hold up anything that is sagging in me like my friends words helped my morale from sagging, she tells herself.

So next week her first art column appears in a newspaper. After a few weeks, she is a name. She likes the modernists only. She hates anything traditional and folk though she dresses up like tribal queen right from the jungles.

Years pass by and she evolves into a full-fledged art critic. She write books, edit books, travels all over the world, collects works of art, threaten artists, dine with them and wine with them. She becomes a diva.

She is everywhere. She is not one but many.

Johny can I recommend you to rename your blog as
By All Means Necessary To Be Incorrect
:-))

from a bored housewife to an art critic ... your looking lens has chauvinism plastered all over! thanks for an otherwise interesting read. regards, seema