A Hairy Controversy Brewed up by a Hair Oil Advertisement 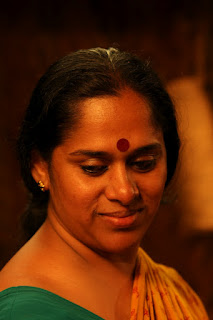 This is a hairy issue; if not a hair raising issue. Sajitha Madathil, a well known theatre activist from Kerala recently acted in an advertisement for a hair oil company called Indulekha. This advertisement shows an angry Sajitha, standing in the middle of a group of women, mostly working women who have just gathered in a bus stand (that we come to know as the advertisement progresses), voices her ire against the eve teasers in Kerala. The angry woman (almost an anti-thesis to the famous Lalitaji of the vintage Surf advertisement) aka Sajitha says that there are some men who are (sexually) excited when they see women with long hairs. Then she asks whether all the women should do away with their hairs and go for bob cuts (like the stereotypical western feminists do). She does not stop there either. She goes on to say that let all women grow hair and handle the eve teasers on the spot. Then the advertisement show us a girl (obviously with long hair) sitting in a bus while a man takes her photograph via his mobile phone camera. Suddenly another girl (again with long hairs) jumps up and snatches the mobile from him.

Advertisements are ideologically loaded. They play up socially accepted and acceptable ideas through the clever mixing of the imagined and the lived realities. Lalita ji of the Surf advertisement became a household name as well as a worthy example for many homebound women to emulate mainly because her image as a married woman (the red bindi on her forehead) who wears an impeccably white sari (that highlights her sanctity as a pativrata besides underlining the fact that she has enough leisure time to be clean and inviting, which implies that she is sexually available for her husband) and speaks of the virtues of Surf, the washing powder. Her persuasive power was so moving that when a serial on the new age women (of 1980s) was produced for Doordarshan, titled ‘Udaan’ (the flight) she was casted as the lead character, who was progressive, daring and sexually agile. The new feature added to the character was her ability to fight the man’s world. The serial Udaan in more than one way made use of the available image of Lalita ji while it subtly subverted the image of a housewife who waited for the man to decide things on her behalf. The imaginary freedom (to wear impeccably white saris) was interfaced with the real freedom (to question the male world) in the serial by the use of Lalita ji as the lead character.

Indulekha Hair oil producers invest their creative marketing minds more or less in the same way when they cast Sajitha Madathil as the angry not-so-young woman in this advertisement. Sajitha, a fairly well known theatre activist in Kerala was in news as she was removed from Kerala Chalachitra Academy. She was a deputy director on contract and she accused Mr.Ganesh Kumar, a minister in Kerala (who is also a well known film actor) for unreasonably removing her from the post. She came out in protest by writing an open letter to Oommen Chandy, the Chief Minister of Kerala. This letter was circulated amongst the intelligentsia in Kerala besides it getting its due attention amongst the general public as the controversy was between an actress and an actor turned politician. In the meanwhile there have been reports that Sajitha has plans to test her histrionic talents in the big screen. 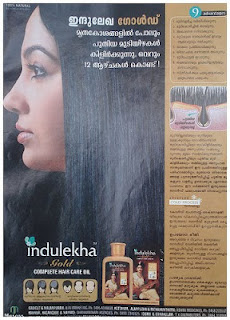 So we have Sajitha Madathil, a new Panchali, who had vowed that she would tie her hair only when her husbands smear it with the blood of Dussassana, who stripped her in the Kaurava Durbar in full view of the elders and public. Here in the present social context, minister Ganesh Kumar becomes a new age Dussassana (this word could be translated as a ‘bad ruler) who had forced Sajitha out of her ‘rightful’ job as a Deputy Secretary in the Kerala Chalachitra Akademy. While the main text of this implied violence remains fresh in the minds of the general public, a Sajith with her untied hair coming out to tell the womenfolk in Kerala to grow their hairs as long as possible takes an interesting turn. Here, Sajitha/Panchali does not wait her husband/s to bring the blood of Dussasana. Instead, she takes control of her own future course and she challenges the innumerable ‘Kauravas’ who appear in our society as eve teasers or the violators of the feminine dignity in the public and domestic realms.

What interests a cultural analyst in this advertisement is the fact that unlike the Surf ad, here in this Indulekha advertisement, Sajitha does not have a name. While Lalita ji is originally Kavita Chowdhury, we conveniently underplayed her Kavita Chowdhury-ness for the sake of Lalita ji’s fictional character. While we know the woman in this hair oil advertisement is Sajitha Madathil in reality, we conveniently underplay so that the angry not-so-young woman could gain an iconic status. In the public domain, this nameless woman who is angry for obvious reasons reflects the unexpressed feelings of a host of women who stand around her. She becomes them while they become her as each of them in their real life situation goes through either eve teasing or domestic violence or workplace sexual harassment. Her in cognito status with no make up to highlight her feminine character, except for the long hair and a bindi, stands a clear challenge to the conscience of those innumerable men who are forced to think about their working mothers and sisters who also would stand in similar situations in similar bus/railway stations. 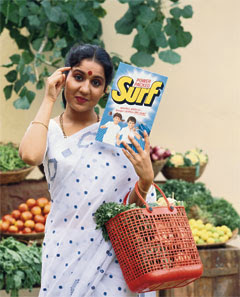 Indulekha is another socio-cultural index that naturally endorses the hair oil’s power to be attached to the image of a modern woman who has the ability to revolt. Indulekha was the name of the first canonical Malayalam novel. Written by O.Chandumenon, a barrister by profession, this novel has Indulekha, a young educated and multi talented woman as the protagonist. Her complexion is golden (none could differentiate where her skin ended and the golden border of her blouse started, says the author), she is equally dismissive of the male tantrums (she dismisses the emotional outbursts of her boy friend Madhavan) and she could stand the thumb rules of the male world by rejecting the marriage proposal by a feudal lord (as represented by the negative character Soori Namboothirippadu) and also by patiently waiting for her boy friend Madhavn to come back from his self imposed exile. In this sense, Indulekha was the first woman protagonist in Malayalam novel genre who could be called absolutely modern. (It is quite surprising that the first three novels in Malayalam had women protagonists, Kundalatha, Indulekha and Sarada)

When Sajitha Madathil endorses Indulekha Hair oil, she automatically demands the users of the same to develop qualities like Indulekha- beauty, intelligence, perseverance, stubbornness and freedom. Here is the double catch of the market and its all encompassing acts of commodification. Sajitha in turn, through this advertisement asks the women in Kerala to use this Hair oil so that they could become beautiful, intelligent, stubborn and free. When you are stubborn and free willed, you gain absolute control on your body and the very same body and its extension, the hair could be used to retaliate against the eve teasers. At the same time, it juxtaposes a series of qualities in one go that it also come to impose the ideology of beauty over the women in general who see this advertisement. First of all it says that to be independent and reactive to situations, one should have long hair and to have long hair means you are intelligent and beautiful. It keeps silence about those women who have long hair but still meek, who have long hair but average looking, intelligent but no long hair and so on. 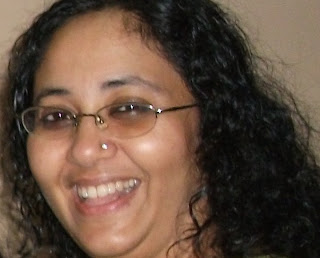 The collapsing of socio-cultural symbolism into the need for long hair and its ability to fight eve teasing becomes, as a feminist like J.Devika points out, counter-productive and self defeating at certain situations, especially in this advertisement. Devika says that those women who have cut their hair for different reasons, in one or the other way are accused of being anti-traditional and pro-Western (read liberal) as they unintentionally (or even intentionally) imitate the western feminists or the feminist ideology. Devika cites the exhortation of Sajitha, ‘Should we cut the hair that we have and go around like men?” has negative and counter-productive undertones. Also Devika says that there could be compulsions on Sajitha as an actress to do this advertisement but had it been a film, there wouldn’t have been any problem. The problematic becomes intensified when it is an advertisement and the advertisement naturally sells a product.

When an advertisement sells a product, it sells an ideology also. When Sajitha positions herself against western feminism or feminist thought in general and promotes growing hair long, it indirectly endorses the male perspective that beautiful women have long hairs. It reminds of those traditional heroines who spend long hours in nursing their hairs (a sort of availability of leisure time as in the case of Lalita ji) or hiding the boy friend inside the heavy hair as the relatives barge into their closets. Sajitha’s advertisement could have been effective had it avoided the anti-feminist utterances of equating women with small hair with men themselves or the ones who behave like men. Besides, this ad does not tell how long hairs are going to help a woman in actually fighting an aggressive eve teaser.
Posted by JohnyML at 11:46 AM

Sajitha’s advertisement could have been effective had it avoided the anti-feminist utterances of equating women with small hair with men themselves or the ones who behave like men....This is exactly what I tried to say through my FB post on the issue: https://www.facebook.com/photo.php?v=3659799613275&ref=notif&notif_t=video_comment